When push comes to shove to act on global warming, Big Mining will wheel in nuclear as a ploy to stall the take up of renewables. Is pro-nuclear Bjorn Lomborg's thinktank in WA just a cynical move by Abbott to kill the clean energy industry? RenewEconomy's Giles Parkinson runs the ruler over the nuclear option.

THE PRO-NUCLEAR lobby has welcomed the decision by the Abbott government to award $4 million to Bjorn Lomborg, a climate “contrarian” who favours nuclear energy and opposes deployment of renewable energy.

Michael Schellenberger, president of the US-based Breakthrough Institute, a pro-nuclear think tank, tweeted over the weekend that the Australian government’s granting of funds to Lomborg was no different to the German government’s funding of an environmental think tank that favours renewable energy.

How is Australian gov't funding for Lomborg any worse than German govt funding for @EnergiewendeGER? @DeSmogBlog

The difference may be that the Energiewende, or energy transition, is official bipartisan government policy in Germany. But Australia does not – at least officially, although its actions suggest otherwise – embrace climate obstructionism and nuclear technology. And it has defunded independent climate analysis such as that from the Climate Commission.

The tweet from the Breakthrough Institute might be unremarkable, but for that institution’s recent alliance with the pro-nuclear lobby in Australia, and the joint release of an “EcoModernist Manifesto” last week that says present day renewables are incapable of providing zero carbon energy, and that nuclear fission is the only technology capable of meeting most, if not all, the energy demands of a modern economy.

This, it would appear, seems to concur with the not-so-subtle secret agenda of Australian Coalition government policy. The Abbott government appointed Dick Warburton – a man who holds similar views, supporting nuclear and decrying renewables – to head the review of renewable energy target.

The government’s review stopped all investment in large-scale renewables in Australia, and it is still refusing to accept a compromise offer that would see the 2020 target reduced by nearly half. Warburton wanted the RET scrapped altogether.

Lomborg wants the government to go further. He told ABC Radio last December that no more solar modules should be installed. Instead, the world should wait for the next generation solar technology, and nuclear.

The authors of the “EcoModernist Manifesto”, which include Barry Brook, who is professor of environmental sustainability at the University of Tasmania and a member of the “experts panel” for South Australia’s Royal Commission into the nuclear industry, appear to be of a similar view.

They argue that “most forms of renewable energy are, unfortunately, incapable” of meeting the needs of a modern society. The only technologies that can, they say, are high efficiency solar cells – yet to be developed – and next generation nuclear fission.

In the meantime, they recommend, the world could build more hydro plants, or construct more coal-fired generators with carbon capture and storage. This ignores the reality that carbon capture and storage is nothing more than a coal marketing boondoggle — incredibly costly, and unlikely to be deployed at any scale. The two solutions they propose – high efficiency solar and next generation solar – are yet to be built.

This view contrasts with studies by universities – most recently by the ANU in conjunction with WWF, and previously UNSW – that Australia could go 100 per cent renewables with no additional economic cost.

Achim Steiner, under-secretary general of the United Nations and executive director of the UN environment programme, wrote in The Guardian on Tuesday that the clean energy future:

‘Beyond all the numbers, though, there’s also an intangible energy building behind renewables. Simply put, people are inspired by clean energy and realise that it’s an idea whose time has come.’

Australia’s Climate Change Authority has also underlined the urgency, calling for an emissions cut of between 40 and 60 per cent (on 2000 levels) by 2030. It will release its updated emission target recommendations on Wednesday.

The biggest hurdle to this lies in the soaring costs and problems facing its preferred technology, nuclear, just as the costs of renewables continues to fall.

France, for instance, has placed its faith in next generation nuclear technologies, but its new reactor at Flamanville is proving a nightmare, already running years late, and with massive cost over-runs.

Those delays and costs are likely to increase because of a new finding by France’s nuclear safety authority that the builders may have used the wrong sort of steel for the pressure vessel, meaning they may have to start over again on that crucial piece of the plant.

This technology is supposed to provide the blue-print to re-boot the U.K.’s nuclear plan. But the planned Hinckley C complex, already costing $43 billion, may not go ahead. Despite offering tariffs starting at nearly $180/MWh, and rising with inflation to nearly $500/MWh 35 years later, as well as massive loan guarantees, the U.K. government is refusing to take the risk of cost-overruns.

So, too, is the French government, which owns the companies proposing to build the reactor, and also the the Chinese state-owned companies brought in as co-investors.

The EcoModernist Manifesto has been criticised by other environment experts for its attachment to the so-called Anthroprocene — a term used to describe man’s influence over nature, particularly with the impact of climate change.

The EcoModernist authors talk of creating a “good anthropocene” and even a “great anthropocene.”

‘those who argue for the “good Anthropocene” are unscientific and live in a fantasy world of their own construction.’

‘In the face of all of the evidence of the harm that climate change will cause this century, some of which is now locked in, talk of a “good Anthropocene” was delusional. But looking forward to a “great Anthropocene” verges on the obscene.’

He said the eco-modernists and other advocates of the phrase “good Anthropocene,” however, use it to advance policies that, if followed, would insure future generations live in the “definitely catastrophic Anthropocene.”

And their objection to Energiewende? That is the name given the German energy transition that aims to phase out nuclear energy by 2022, and build an energy system around renewable energy. EnergiewendeGER is a small information unit run by the Heinrich Böll Foundation, a think tank that receives funding from The Greens, and from the German government’s development aid budget.

This article appeared in RenewEconomy on 21 April 2015 and has been republished with Giles Parkinson’s permission.

Bjørn Lomborg: It's too early to abandon nuclear energy http://bit.ly/eG1xWt 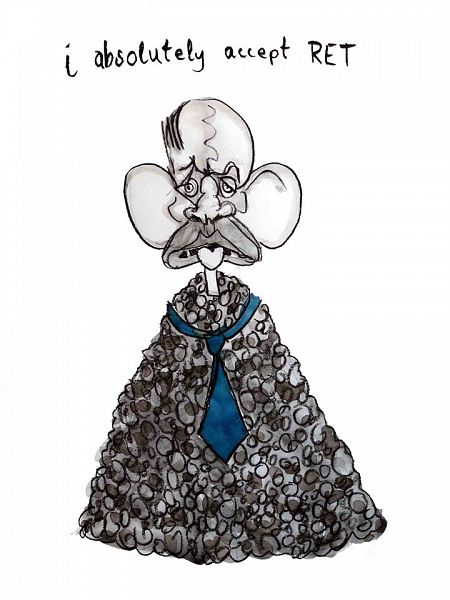 You can order John Graham's original cartoons from the IA store.