On Friday last week, the power bill for the property where I used to live arrived.

The property is shared by seven people and I do the sums to work out who owes what.

So I opened up the bill to begin my calcs when this appalling piece of coal burners’ propaganda caught my eye. 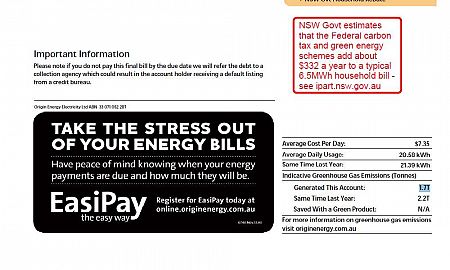 I refer to that red outlined square in the graphic — top right.

Even from my first take, I was sure that the amount, $332, was high, secondly it appeared clear to me that Origin Energy were printing Coalition propaganda.

This was particularly disturbing, as Origin Energy has 4.3 million customers and so this propaganda was going to a greater audience than some commercial TV networks.

To compare, Australia's top rating show is a piece of reality TV garbage, with an audience of 1.5 million viewers.

So I set to and did some mildly complicated maths on my own that confirmed my initial gut feeling this was a high figure.

But I decided to get a more expert opinion, so I contacted Associate Professor Mark Diesendorf, the deputy director of the Institute of Environmental Studies at the University of New South Wales.

Within it, he shows that we are ready to go now, today, with sustainable clean energy to achieve baseload power.

So, here was a man who knew about this subject.

In my initial email, I referred to an

‘… outrageous piece of marketing that appears on everyone's power bill.’

‘Hi Lachlan, Yes, it is outrageous propaganda against climate action and it's a gross over-estimate.’

He then went on to do the maths for us all, using the same example that appeared in the red square above.

It is all here in this graphic: 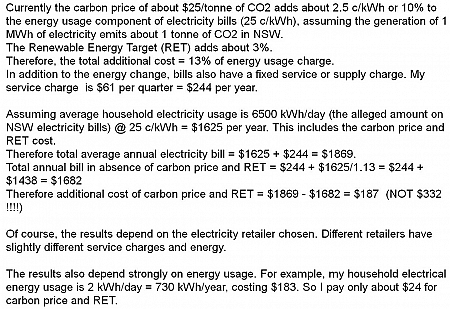 However, the two most salient points from it are in the third last paragraph. There, Dr Diesendorf finds a figure of $187 for so-called “carbon tax” (which is actually a fixed price on carbon) and the Renewable Energy Target (RET).

Finally, on the very last paragraph the professor, who clearly uses nearly all renewables at his house, shows his own energy usage — a miniscule, 2kWh a day. In comparison, my bill from a property shared with people less than concerned with the environment, was 20kWh a day.

So, Mark only spends $24 on the "carbon tax" and RET for a whole year.

Thus the Origin figure is high — so now it was time to find out why they were putting this misleading message on bills going out to 4.3 million customers.

I contacted Origin Energy and asked these questions:

2. Did the State government have any input into this decision?

3. My calculations show that the true figure should be:

I used my own maths for these questions, as I contacted Origin before I received Mark's reply, but as my answer, $195, was not dissimilar to Mark's answer, $187, the Origin reply was still relevant.

Essentially, it told me:

Origin's reply indicated that there were a whole lot of green schemes costing us money, as indicated in this figure. 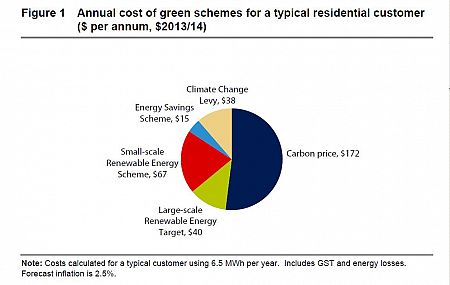 So I sent IPART fact sheet, in which this graph appeared, to Mark Diesendorf.

The following was his reply:

‘The so-called fact sheet doesn't give IPART's assumptions, apart from the annual demand of 6500 kWh (which I used too) and the carbon price estimate of 2.6 c/kWh (I assumed 2.5 c/kWh, which is close). It is unclear how IPART calculated the cost of the other 'green' schemes.’

So again, Associate Professor Diesendorf has shown the figure is wrong.

But then we come to the second part of my queries:

‘Did the State government have any input into this decision?’

When I began this piece, I thought I was on to a hot story of government and industry cartelling and collusion, with ministers meeting with energy company executives in dingy darkened dives to come up with schemes to lie to NSW energy users.

But, as it turned out, there was no hiding about it whatsoever.

‘Print our propaganda. If you don't you'll be charged.’

If you follow the above link, you can read the law for yourself.

But in the end, I don't know why they even bothered with a law about it, as the coal burning energy suppliers would have happily printed this garbage for free.

So there you have it: first the figure is wrong, way high, then the State Government is using the law to ram it down the throats of 4.3 million electricity consumers, most of whom are voters.

The fight for clean energy goes on and this article shows who we are fighting.

Our very own governments.