The Knitting Nannas Against Gas have had a major win over CSG miner Metgasco at Bentley in Northern NSW, writes Lachlan Barker.

I was in Ballina on Monday last week going about my other work as a gardener, when I spied this group outside the offices of Nationals MP, Don Page.

So I raced over to find out what was going on.

Turns out it was a group of 'Knitting Nannas Against Gas' (KNAGs) taking their democratic right to get their point across to their elected representative.

I write from Byron Bay, which is in the Northern Rivers region, on the far north coast of NSW. It is also nicknamed the Rainbow Region, due to a large “hippy” influence.

Sorry if that seems demeaning, but no other word really suffices.

Here the political breakdown is as such.

Byron Bay, Mullumbimby, Nimbin, and increasingly, Lismore, are the centres of greenie-left voting. The traditional conservative voting areas of our region are Casino, Alstonville and Ballina.

Thus this group were making their point in the conservative heartland of our region.

What’s more, the group outside Don’s door were hardly the stereotypical protester.

The Andrew Bolts of this world view the environmental protester as an unkempt dole-bludger, dressed in macramé weave, and smoking a bong the moment the camera is off them. However, the anti-CSG movement seems to be breaking away from the classic image of the protester.

It seems that because the bulk of drilling for CSG is done in rural areas, a number of traditionally conservative-voting farmers have joined the anti-CSG movement. Their thoughts seem to be whatever it takes to keep the water of the area clean and drinkable, for both stock and human, is worth doing.

This group of Knitting Nannas exemplified this break away from traditional view of protesters.

Seen without their colours, this group would be seen by pollsters as classical conservative voters, in the 50+ age bracket and inhabiting Ballina, a staunchly conservative heartland of rural NSW. 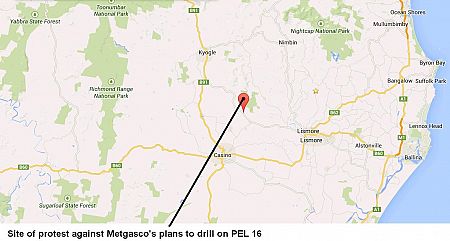 So I spoke with Protest Organiser Wendy Craig Duncan, to find out what this was all about.

The first thing Wendy said was that her group are the Ballina chapter of a nationwide organisation of Knitting Nannas Against Gas.

Secondly, they wish to be known as “protectors”, not protesters.

Wendy and her group have been lobbying Don Page about local Petroleum Exploration Licences (PELs), on which coal seam gas (CSG) is drilled for.

The most recent CSG furore was over Metgasco’s plans to drill for CSG at Bentley.

For those not across that issue, here is a summary.

Recently, Metgasco set out to drill an exploratory gas well, on Petroleum Exploration Licence (PEL) number 16, at Bentley a locality not far from Casino, about an hour and a half from the coast.

A massive protest formed and the State Government, suspended Metgasco’s licence to drill.

The statement from minister for energy and resources Anthony Roberts says this of the suspension:

“Mr Roberts said the Office of Coal Seam Gas (OCSG) has informed Metgasco of the suspension on the grounds that it did not fulfil a condition of its exploration licence, namely to undertake genuine and effective consultation with the community as required.”

On this topic, I spoke with Lismore councillor Simon Clough during the Bentley protest; he told me, with some acerbity I might add, that

“... telling you what they [Metgasco] are doing, is not consulting with the community.” 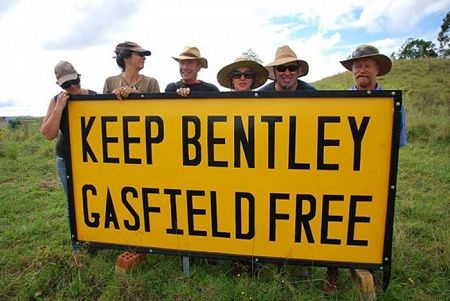 These local landholders exemplify the move away from the traditional view of the standard protester (Image via facebook.com/bentleyblockade)

Charlie Wilkinson, a farmer whose lands adjoins the proposed drilling site, said that the first he knew of the plans to drill were when a glossy brochure was stuffed into his letter box. He also shared councillor Clough’s view that this is not 'consultation'.

Metagsco have since gone to court to try to have the suspension lifted.

On Wednesday the 25th of June, Minister Roberts will be meeting with the Office of Coal Seam Gas (OCSG), and the future of Bentley will be discussed.

The Minister’s press secretary, Tim Potter, told me that this meeting would be so that the OCSG could make a recommendation to the minister regarding Metgasco — basically, whether they would be allowed to drill or not.

Wendy told me that her group were making this point with Don Page:

"We'd like Don to represent the electorate and make it clear there is huge community opposition to unconventional gas drilling exploration and mining. We would like him to get in touch with minister Roberts and/or Mike Baird before Wednesday’s meeting."

She went on to say that her group were hoping that

“... the state government would announce once and for all that there will be no drilling for gas at Bentley."

Also, to clarify a little, here is a brief summary about the types of drilling.

Conventional drilling is where the gas comes up under its own pressure, essentially you prick the underground gas balloon with the drill, and collect the escaping gas. Unconventional drilling involves fracking (hydraulic fracturing). If the gas is trapped in tight sands, then “stimulation”, or “fracking” is needed.

One of the claims of the Bentley protesters is that Metagsco wish to “frack” the well at Bentley to release the gas from tight sands.

This, of course, is a very risky procedure and collapsing underground rock can shatter the well and lead to the leaking of drilling chemicals into the water table.

Wendy and her group are also hoping that PEL 445 will be fully revoked, possibly as part of Wednesday’s meeting.

I contacted Don Page for comment, but have had no response.

'Some months ago I met with Dart Energy and suggested that, as they are required to relinquish 25% of their PEL 445, would they relinquish that part of their PEL that covers the Ballina Electorate. They agreed. I have subsequently asked the Government not to re-issue the relinquished part of PEL 445 covering my electorate and I believe good progress is being made in achieving that outcome.'

Wendy and her group still have some concerns that part or all of PEL 445 will be handed on by sale to another company. The group wants no CSG drilling to ever take place in the electorate.

And, in the end, the Knitting Nannas have had a win.

On Thursday, 26  June, the decision the Knitting Nannas were waiting for came down — the suspension will remain in place.

The statement from minister Anthony Roberts reads as follows:

As requested by Metgasco, a review of the Office of Coal Seam Gas (OCSG) decision to suspend operations of Metgasco under the Activity Approval has been undertaken.

Metgasco was provided with opportunities to submit additional material to be taken into account in relation to this review.

Metgasco took the opportunity to submit additional material during the course of the review which has been taken into account.

An Executive Summary of the reasons will be published by the OCSG on its website in due course at: www.csg.nsw.gov.au

As this matter remains the subject of ongoing litigation, I will be making no further comment.

So, in the end, the Knitting Nannas have had an effect.

One can’t help thinking that the political pressure applied by the KNAGs and the other protectors out at Bentley, were large factors in the decision taken by the OCSG.

So, if you are planning to drill for CSG anywhere in this wide brown land, you'd better hope the Knitting Nannas don’t find out about it. 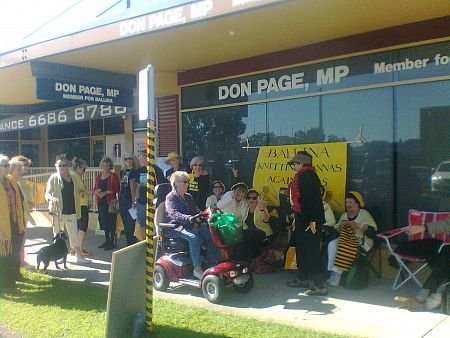