With Greg Hunt boasting on ABC 7.30 about yesterday’s deal with Clive Palmer, as well as the repeal of the “carbon tax”, Lachlan Barker looks at his dubious claims about lower electricity prices.

He was in such good spirits some unkind people have even suggested that he may have partaken in one too many celebratory champagnes after the press conference announcing the deal , just before his interview with Leigh Sales on ABC 7.30. This seems unkind, though there certainly did not seem to be much sensible information emerging from his mouth during the course of the programme.

One of the things Hunt did want to gush out ‒ and did so, over and over again, speaking over Sales, much to her annoyance ‒ was that he had also recently managed to repeal the carbon tax, “lowering electricity prices” for consumers.

Indeed, Hunt and Finance Minister Mathias Cormann have both recently released press releases crowing about a drop in electricity prices and how this is due to the repeal of the carbon tax. None of their media spin, however, mentioned why power prices are so high — network charges, and the gold plating of the poles and wires. What’s worse, the Australian Bureau of Statistics (ABS) even says, literally in black and white, that it is impossible to quantify to effect of removing the carbon tax on electricity prices. 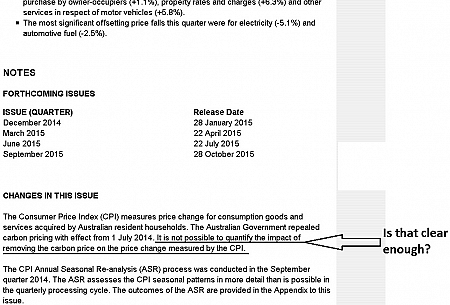 I contacted Cormann and Hunt to ask if they could explain how they can link the price drop to the carbon tax repeal when the ABS clearly says it can’t.

The environment minister’s press secretary, could answer the question, instead mumbling something about:

“… mums and dads are seeing real changes in their bills”.

The Finance Minister’s office obviously knew they were on a loser and didn’t care to respond.

So, why did the price drop?

Well I checked with several experts and none had a definitive answer.

However, Associate Professor Mark Diesendorf of the University of New South Wales’ Institute of Environmental Studies did gave a speculative answer when I asked him if he knew why the electricity price had dropped 5.1%, to which he replied:

‘No doubt the removal of the carbon price contributed, but so is the growing contribution of wind power in South Australia, which is clearly reducing wholesale electricity prices there.’

No mention of that from happy Greg Hunt, of course.

Nevertheless, Hunt has been trumpeting power bill savings following the repeal of the carbon tax.

In years to come when the LNP accept #Climatechange as fact, this photo will haunt the party http://t.co/NnqiNgRGdM #auspol

Here is an example of Hunt’s claims, taken from an interview with Steve Price on Sydney’s home of Alan Jones, 2GB:

“If you’re with Lumo Energy, you had an 8.7% reduction in terms of the carbon tax being taken off. EnergyAustralia — 8.9%; Simply Energy — 10%; and if you were with Simply Energy for small business, a 9% reduction. And if you’re using gas, similarly we’ve had very large reductions.”

When I first read this, I thought the minister had derived these figures using actual power bills. But that’s not the case; it turns out that the minister was simply relying on ‘data’ given to him by these power companies.

So I went away and checked and it turns out these are power company estimates only — and ones with enough get out clauses to satisfy Houdini.

Here how EnergyAustralia arrived at their “estimate”:

‘The estimated annual average cost savings for residential electricity customers are based on the carbon price per MWh, loss factors, MWh per annum used, the estimated customer bill for the financial year 2014-15 for each State/Territory and EnergyAustralia’s implementation costs.’

Powerdirect, a subsidiary of AGL ‒ a company the minister’s press secretary put me on to ‒ even says on its home page prices may increase:

‘Although the price reductions due to the removal of carbon tax are being backdated to 1 July 2014, some customers may see an overall increase to their energy rates due to these other changes.’

‘These other changes’ refer to recent price changes, unrelated to the carbon tax, in Queensland, NSW and South Australia.

The point here, just to reiterate, is that Hunt and Cormann can’t link the entire electricity price drop to the repeal of the carbon tax.

They may be able to in the future, but not now.

So, when the minister said in his radio interview “you’ve had an 8.7% reduction”, he was flat out lying.

To be accurate, Greg Hunt should have said:

But even then, I wouldn’t count on it.

As mentioned previously, the real reason power bills are so high is because of the power company’s outrageous network charges. I’ve written on this topic myself, but it is clear I need to cover the topic again.

This year, Origin ‒ one of the industry’s biggest players, with 4.3 million customers ‒ is forecast to increase its profits by 10% to $784 million.

So clearly, if they are planning to put their prices down due to the scrapping of the carbon tax, then they are planning to get their profit increases elsewhere. Maintaining high network charges will be a part of it, while another may be using cheap gas from Queensland to bring down the cost of generation.

Greg Hunt even referred to this in his radio interview and, as usual from our Coalition Government, it’s (still) all Labor’s fault:

“Under Labor electricity prices went up, according to the Bureau of Statistics, 101% over their six years.”

Now, this is widely agreed, even by me, which leads to the question: isn’t it time the LNP did something about it?

So I called both Greg Hunt and Matthias Cormann and asked them that, asking them both:

If power prices went up 101% during Labor’s term of office, is this because of network charges, the ‘gold-plating’ of the poles and wires? If so, are you going to legislate to reduce these charges?

Who's paying for the Abbott government's propaganda in our power bills? http://t.co/dUMLmhR9so

Greg Hunt’s office referred me to Energy Minister Ian Macfarlane, so I forwarded the questions, and got (shock!) a response.

A spokesperson for the Energy minister said that his Government will be:

‘… providing consumers with more information to manage their electricity use, and ensuring the regulatory framework minimises red tape and extra costs for electricity suppliers, which are ultimately passed on to the consumer.’

So, in other words, they will be telling consumers to use less power, while at the same time removing any regulatory safeguards to stop power companies gouging you for every cent you’ve got.

By the way, once again, the smart operators in Matthias Cormann’s office knew they were on a loser and did not respond.

Firstly, the repeal of the carbon tax will have little or no effect on your bill — it may even go up.

Secondly, the Federal Government refuses to deal with the real reason that power prices are so high ‒ network charges ‒ in any meaningful way, instead dealing with the problem by diversion and spin.

As ever, these articles on power prices are paradoxical for those of us who care about the environment.

Clearly, none of us want those on low incomes to be struggling to pay their power bills to fuel power company profits, yet the greed of the fossil fuel based power companies ‒ in league with their partner and protector the Federal Government ‒ is leading to a rush to install renewable power in the home.

Fifty thousand solar panels were installed in NSW in the first three months of this year in an effort to reduce crippling power bills — giving a current total of 1.3 million Australian homes now with solar panels on their roofs. Therefore, ironically, power company greed is having a bizarre ‘good for the environment’ effect.

Finally (and this really sums up the power companies’ desire to protect the environment, AKA, nil) when I was doing my research, I went to the AGL home page to read their spin and found this job ad:

When an energy company can’t even spell ‘environment’, you can be pretty certain they couldn’t care less about protecting it.

But then again, we have an environment minister so in raptures over repealing a price on carbon and sealing a deal with a coal miner to pay polluters taxpayer’s money to please stop polluting he is utterly insensible on national television.

What did Australia do to deserve this?