New information regarding the so-called removal of koalas from the Coomera-Pimpama region reveals a lack of compassion on behalf of the Palaszczuk Government, writes Sue Arnold.

IN AUGUST, the Queensland Minister for the Environment, Leeanne Enoch, was asked in an Estimates Committee hearing how many Coomera koalas had survived the Gold Coast City Council translocations of some 180 plus koalas to conservation areas approximately 40 km from their home ranges.

The translocations took place between 2009 and finished in June 2014. Gold Coast City Council (GCCC) records indicate that the translocations of more than half of a critically important nationally significant koala population was solely to facilitate 30 developments.

‘Since September 2009, the City has captured and relocated koalas from over 30 new development sites in East Coomera, as well as locations of imminent danger along busy roads.’

Research found that the East Coomera area supported one of the city’s largest koala populations: approximately 500 koalas across 3,640 hectares, with over 900 hectares of this land overlapping with the planned new Coomera Town Centre and surrounding urban area.

The Coomera-Pimpama koala population is one of the last remaining core populations in southeast Queensland, the heartland of the species.

It’s been almost impossible to obtain any information on the fate of the translocated koalas, other than an admission by GCCC that in the initial translocations, 23 koalas were savaged to death by wild dogs in the conservation areas. Apparently, no authority had bothered to check any threats to translocated koalas in their new “homes”.

Koala watchers fear most animals died after being moved for Gold Coast development. Only 2 of 180 tagged koalas shifted by Gold Coast Council and the Qld Gov between 2008 and 2014 near Coomera were rediscovered after the relocation.    https://t.co/zn6p58Vy0D via @smh

An opportunity arose when LNP member for Broadwater, David Crisafulli, asked the minister a number of questions including: “What is the scientific advice from your department about the relocation of koalas?”

The response from her Deputy Director-General indicated that the mortality rate was a shocking 42 per cent. However, independent scientists with major concerns over the Coomera translocated koalas and the ongoing efforts of the Palaszczuk Government to adopt translocation as policy were not convinced by the mortality estimate.

As a result of Right to Information requests by Australians for Animals Inc., not only has the Minister and her Deputy Director mislead the parliament but the real mortality constitutes a national scandal.

In the six months after the translocations ended, according to the RTI documents obtained, four surveys were undertaken revealing the sum total of two living translocated koalas.

The GCCC, facilitated by the Queensland Government and Federal Governments have conspired to wipe out more than half of Coomera’s koala population. The loss of these koalas is a national disaster at a time when the species is facing extinction in NSW and Queensland.

RTI requests to the Department of Environment and Science revealed that once the translocations (which were permitted under illegally issued Scientific Purposes Permits) ended, no surveys were conducted by the government. After June 2014, the GCCC undertook no further surveys. Translocated koalas were abandoned.

To put this appalling loss in perspective, let’s go back to the obscene GCCC proposal known as the East Coomera Koala Conservation Plan.

SEQ has already lost more than 80 per cent of koala habitat as a result of massive developments. 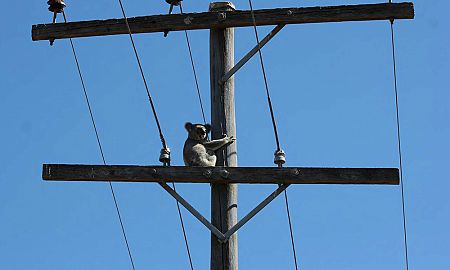 A frightened, confused koala uses a power pole for safety (Image via Return to the Wild)

According to the GCCC Koala Plan website, the focus was:

‘To guide the management of koalas on the Gold Coast, the City has carried out extensive monitoring, research and conservation actions to ensure their long term survival.’

The Coomera-Pimpama area had been identified for major urban expansion at state and local levels as a Major Regional Activity Centre under the South East Queensland Regional Plan 2009-2031. However, in 2012, Tony Burke, then Minister for the Environment, declared the koalas in Queensland, NSW and the A.C.T. as “Vulnerable” under the Environment Protection & Biodiversity Conservation Act, 1999.

This designation required developers to ensure that their projects were scrutinised and approved by the Federal Government. The subsequent development of koala referral guidelines obliged developers to refer their major projects as Matters of National Environmental Significance (MNES) and Controlled Actions requiring Environmental Impact Studies, potentially risking denial of approval because of the risks to the koala population.

However, the GCCC completely ignored both the “Vulnerable” listing and the Koala Referral Guidelines by setting up a “Koala Conservation Program” which sought Queensland Government consent to translocate 180 koalas and their joeys to facilitate some 30 developments under the guise of Scientific Purposes Permits.

The “Program” was supported by the Queensland Government which issued Scientific Purposes Permits to give cover to a completely illegal operation which violated provisions of the Nature Conservation (Koala) Conservation Plan and Management Program 2006-2016. 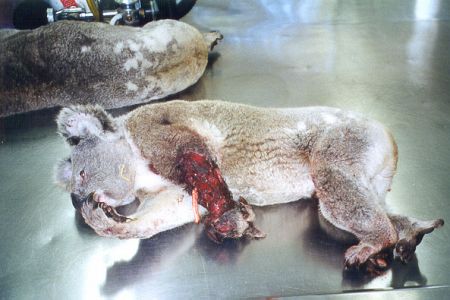 The Plan described the plight of koalas thusly:

Koalas are suffering from the impacts of urban development and habitat clearing. The greatest threats to their survival are the destruction and fragmentation of their habitat, car strikes, dog attacks and disease. With population growth – some 55,000 a year over the past two decades – poised to continue into the foreseeable future, the need for an integrated landscape strategy to maintain vital koala habitat is vital, as is the need to provide for more compatible development where it does proceed.

*The Gold Coast was identified as Koala District A facing the highest threat. Habitat loss has been identified as the greatest threat to koala survival.

Unapproved translocation constitutes an offence under the Nature Conservation Act 1992.

Translocation of koalas into areas outside of their natural range is prohibited and constitutes an offence under the Nature Conservation Act. No approvals will be given to introduce koalas to new areas or areas outside their known natural range.

The translocations which took place from 2009-2014 had no scientific basis and were solely undertaken to allow developments to proceed with clearing precious habitat, thus ensuring that the projects would not be regarded as MNES or obliged to follow the Koala Referral Guidelines under the EPBC Act as koalas in the project area had been removed.

The Permits ensured that the GCCC could go ahead with traumatic capture of healthy, peaceful koalas and joeys, subjecting them to anaesthesia, blood sampling, bone marrow sampling, urinalysis – which involved locating the urinary bladder using ultrasound and extracting urine through the abdomen using a needle and syringe – ear tags, radio collars and microchips. Once recovered, koalas were again sedated before dumping them in vehicles to be shipped some 40 km away from their home range.

Koalas in the translocation areas were also subjected to the same capture regime and the battery of tests under anaesthesia.

@AnnastaciaMP please take a stand and stop Koala habitat being destroyed at Coomera, the Sunshine Coast.. And any other Koala habitat in QLD https://t.co/WI7YfKHFAu

More RTI requests revealed that Animal Ethics Committee approvals were issued by the then Queensland Department of Employment, Economic Development and Innovation (DEEDI), now Department of Agriculture and Fisheries (DAF). Given that the Department has nothing to do with wildlife, much less koalas, the approval was nothing short of outrageous.

According to the Scientific Permits, the GCCC was obliged to provide wildlife returns, mortality records, interim reports and data obtained from the translocations.

Once again, this information was not publicly available and more RTI requests had to be made with the usual requests by departments and GCCC for neverending extensions.

Queensland's Right to Information Act is a cute piece of legislation. If the requester doesn’t agree to an extension, then the RTI is cancelled. So there’s no choice but to agree to ongoing extensions unless the submitter wants to indefinitely extend the request by complaining to the RTI commissioner.

Little wonder the information has been withheld as it demonstrates the most catastrophic outcomes for koalas and joeys. Dozens of koalas and their young torn apart by dogs, vehicle strikes, radio collars causing major injuries as they slipped or were too tight causing wounds.

The documents reveal repeated captures, exponential increase in diseases, particularly chlamydia which is triggered by stress.

At a meeting with the Queensland Premier Annastacia Palaszczuk six weeks ago, a leading koala expert together with the co-ordinator of Australians for Animals Inc. made the following requests:

The Premier responded sympathetically indicating how much she cared for koalas.

She made undertakings to consider the requests and to have further meetings.

Six weeks later, no response has been received from the Premier, her staff or any of her department in spite of emails, phone calls and texts requesting outcomes.

As the weeks roll on, local government areas in Queensland including the GCCC continue their appalling destruction of koalas and their habitat.

In spite of an extraordinary level of protest and concern by the Queensland and Australian public, it appears that the GCCC and the current government are taking their cues from the Joh Bjelke-Petersen era. 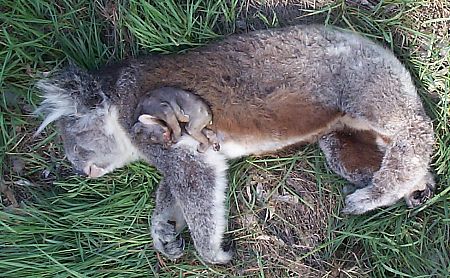 Save the Coomera Koalas - Sign the Petition! https://t.co/OkV98SgAHp via @ChangeGER