THE INTERGOVERNMENTAL PANEL for Climate Change (IPCC) recommends that "natural solutions" are employed to deal with climate change emergency. The immediate protection and restoration of natural systems for carbon dioxide removal (CDR) are preferred to geo-engineering and B.E.C.C.S — burning biomass as a fossil fuel substitute while using some sort of carbon capture and storage.

It is clear that the resilience of natural systems must be enhanced to withstand climate change impact, lest they falter and collapse, inhibiting their capacity for CDR.

The fairytale that burning wood instead of coal is carbon neutral continues to wreak havoc on the world’s extant forests. But that fairytale could soon end, taking with it the myth that the industrial logging of the world’s native forests has been and is now "sustainable".

For a long time, the falsity of carbon emission accounting for forest bioenergy has been apparently invisible to many policymakers. A Weekend Australian commentator said, in relation to UK power station Drax which has converted to wood: “The CO2 it emitted as a coal station was causing climate change; the increased CO2 now emitted from burning wood is defined by the EC bureaucrats as not existing”.

Non-carbon neutral forest bioenergy emits more CO2 per unit of energy than fossil fuels.  These emissions cannot be re-captured by tree regrowth within the timeframe required to prevent irreversible global warming. This is the decade in which emissions must be radically cut, while atmospheric CO2 is simultaneously drawn down from the atmosphere — if we all want to survive.

It could take up to 100 years before new plant growth might re-sequester the carbon emitted from the wood burning. It could take a lot longer, dependent on the nature of the forest felled for combustion.

Various ‘"gentleman’s agreements" stipulate it's okay to burn world forests as long as the carbon sink being destroyed is logged sustainably and/or that the biomass from the logging has been redefined as residue.

Their whole log "residues" can be chipped and transported to power stations or transported and then chipped at the power station, as with NSW power stations Vales Point and Cape Byron. Native forest biomass burnt with or without coal or something else, props up emission intensive enterprises with its "carbon neutral, renewable energy, subsidy attracting" quality.

Or the forest biomass is exported, as pellets, chip or whole trees but please no questions. Try finding out what happens to native forests shipped out in containers via the ports, as a member of "the public".

Tthe world has two significant and related problems. Climate change & population. Larger population are not necessarily big drivers of climate change - but as we look at burning of forests, plastic ocean, etc. It is a contributor to environmental damage. https://t.co/oG8OqSPX3q

Public money presumably supports the interests of our entities’ private stakeholders in the quest for the FSC tick. There’s the entire operation, administration, FSC membership fees and the cost of the independent audits to prove that our native forest carbon stocks and sinks are being destroyed, at least, according to a FSC best practice version.

The contribution Australia’s carbon-dense forests could play in sucking carbon down from the atmosphere is not only being squandered; it’s in full reverse. We’re sending some of the most carbon-dense forest carbon stores overseas to be converted to atmospheric CO2. Intact South-Eastern Australian eucalypt forest ecosystems can store an average 640 tonnes per hectare.

In 2011, The Economist reported ‘European firms are scouring the earth for wood.’  As large-scale bioenergy production doubled, emissions from global forest degradation followed suit. Powerful companies operating under the aegis that "forest bioenergy is carbon neutral" could help policymakers ignore that.

The European Scientific Union of Scientists, individual IPCC panel members, deeply considered scientific reports, statements, declarations and pleas from thousands of scientists internationally, have been ignored by allies of the forest bioenergy fraternity.

Hence global forests continue to be felled and there is rapid expansion of the subsidiary wood pellet trade, predicted to escalate from 14 to 36 million tonnes per annum by 2027, as Europe, Japan and South Korea adopt the Emperor’s New Clothes approach to wood combustion.

In Australia at least three pieces of legislation now facilitate burning logged native forests: NSW’s Protection of the Environment Operation Act, Abbott’s amendment to the Renewable Energy Target (RET) 2015 and the recently-renewed NSW Regional Forest Agreement that in 2018 amended the definition of ‘other wood products’ to include forest biomass.

There is an imminent risk of bloodshed in the Amazon unless Brazil's government protects Indigenous peoples, amid ongoing illegal land seizures & logging in their territories. We just got back from the Amazon & here's what we found. https://t.co/XNZFs0q8ug

Analysis of Abbott’s RET code reveals whole trees of native forests eligible for subsidisation – if burnt – not left standing. That followed the introduction of legislation by Premier Barry O’Farrell.

This was Liberal Party state policy paving the way for the next Federal Coalition, to serve state forestry corporations and logging and coal industry allies the piece of RET pie they craved, through "co-generation".

The NSW Department of Primary Industries (DPI) has been advocating large scale power generation from native forest wood since the mid-2000s. By 2017, it reported a million tonnes of residue available for fuel, residue which by definition includes whole trees from forest compartments known to house wildlife threatened with extinction.

To export massive quantities of Australian forests as wood biomass and pellets is Federal Coalition policy but it’s most strongly championed by the National Party. It plays out via "The National Forest Industries Plan 2018", a re-statement of former logging industry aspirations readily adopted by the Coalition.

Our forests are now being actively marketed as an export commodity for combustion in Asia. In December 2018, Australian Government representatives met Japanese Government officials and industry leaders, including bioenergy and paper companies. The Federal Member for Barker, Co-Convenor of the Australian Parliamentary Friends of Forestry and Forest Products group, Tony Pasin, announced:

Japan’s appetite for our Aussie woodchips and manufactured bio-pellets has driven the country’s move into bio-energy”.

Regarding the release of the Federal Government’s National Forest Industries Plan, he said:

“It’s the perfect time to ensure the Japanese Government understands the opportunities that will open for the forestry sector in Australia and what this means for increased trade”.

Japan’s need is so great it overwhelms capacity to supply anything but a minor portion from its own forests. China, as the principal importer of most Australian wood product this last decade, happens to have a policy of ceasing any further logging of its own native forests by 2020. 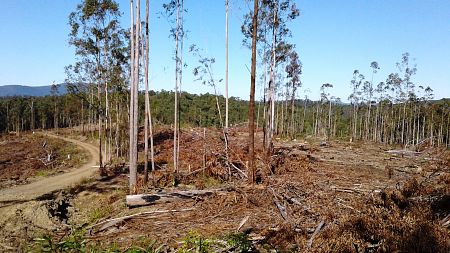 Six sensible political parties, multiple independents, all major conservation and climate change groups including the Climate Council and the Australian Religious Response to Climate Change and thousands of scientists argue that logging and burning our nation’s native forests should not be allowed.

Many don’t want them industrially logged anymore, either. 80 organisations have already endorsed the National Position Statement against Forest Bioenergy and more are asking to sign on all the time.

Forest destruction is ecocide. Continuing it could well become political suicide, sooner, rather than later.  Listen up political parties.

Frances Pike is affiliated with the Australian Forests and Climate Alliance. You can follow Frances on Twitter @nativesrule.