The proposed provision in the revised RET to burn native forests for biomass power will help accelerate the current man-made extinction crisis from disaster to catastrophe, to global ecosystem collapse, writes Frances Pike — especially in those states signed up to Regional Forest Agreements.

THE INTENSITY of logging in Australia is visible behind the thin veneer of carefully retained trees along major highways and tourist routes, from planes and from satellite imagery (NSW, WA, Victoria).

Forestry has changed. Industrialised logging is the new norm. Silviculture now is highly mechanized harvesting technology capable of intense rapid clearing. There was no announcement to the Australian public that selective logging by manual extraction was being replaced by machines that flatten forest understoreys.

A disastrous set of clear fell “experiments”,  alongside the aerial application of herbicide and/or accompanying on ground “disincentives” to native animals (in the form of poisoned baits), is called “sustainable”. Systematically, industrialised logging modifies forest ecosystems. Deliberately or inadvertently, a process of “conversion” of forests into factories takes place. Australian deforestation is occurring at rate and of a scale never seen before.

Two thirds of Australia's loggable native forest is under Commonwealth-state Regional Forest Agreements (RFAs) — a mid to late 90’s attempt to control deforestation. The ecological basis was to be an offset system, the establishment of Comprehensive, Adequate and Representative (CAR) reserves. The process for establishing these was inadequate, unscientific, its legal status ambiguous. Yet the stated ecological intent is used by government and Industry to claim sustainability. Reports of catastrophic damage are countered by a hollow statement — RFAs were to make Australian forestry sustainable. Ergo Australian logging is sustainable. RFA rhetoric, paid for by their taxes, was fed to the public by industry and government. Now, science and empirical evidence expose the sustainable native forest logging myth as a "deadly" lie. Australia is a leader in global deforestation and leads the extinction crisis.

Eastern #Australia is 1 of 11 world regions accounting 4 majority of global #deforestation We must and can do better! pic.twitter.com/VhbOofFkBR

A state by state glimpse of RFAs reveals disaster. Wildlife is pushed to extinction, soil, water and carbon storage functions destroyed. Industrialised logging kills forest life, directly and indirectly and through cumulative impacts. The Industry has been promised "rolling renewals" to the national forest estate. The first, Tasmania, is scheduled for as soon as possible this year — unless the Australian public prevents it.

The following analysis looks at the devastation being wrought to Australian forests in states covered by Regional Forest Agreements.

In Western Australia, not one piece of legislation to defend forests from logging impact.

WA exempts forestry from fauna provisions of its Wildlife Conservation Act 1950. Fifteen state and/or nationally listed threatened species are already gravely impacted, including some on the brink of extinction. Ancient forests carbon dated to 600 years of age are clear-felled, to be re-logged long before they can recover. The essential breeding/nesting hollows for forest dependent fauna take 250 years to develop. Across the continent, even where these develop in half that time, hollows loss is a major extinction factor as trees of native forests are no longer being permitted to mature. 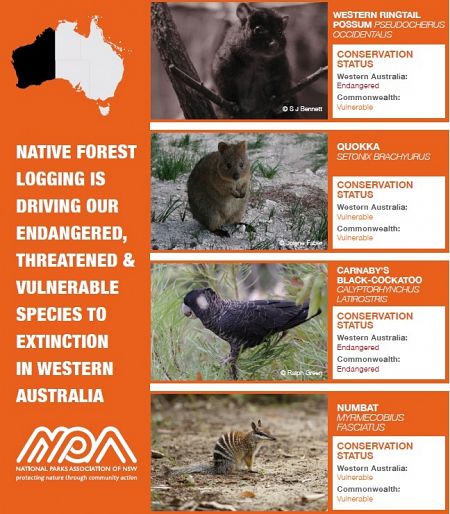 WA Forest Alliance monitors conversion/modification of the karri and jarrah forests, both of which grow in association with marri. What’s left of the old mature karri is being clear felled, with no marri replanted. And where jarrah is logged heavily, no other tree species is encouraged to regrow.

The North East of NSW, one of the world’s 35 “biodiversity hotspots”, with at least 1,500 endemic plant species (0.5% of the world’s known plants) is still being logged, despite 70% of primary vegetative cover already having been lost. Though a critical refuge for global species survival, from the Queensland border to Gosford, these biodiverse forests are, by stealth, being converted from ecosystems to single aged stands favouring one species. There are seven endangered ecological communities on the national list here; 43 animal species and 164 plant species critically endangered, endangered and/or vulnerable to extinction. These forests house 11% of Australia's nationally listed threatened animals and 13% of the threatened plants. Of 109 species threatened by logging, it is logging that is now the number one threat to the survival of 41. 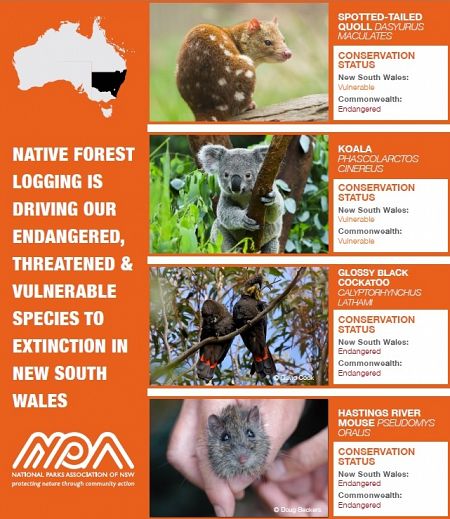 Even though the Auditor General warned in 2009 that North Coast forests are being cut 'faster than they can grow back', logging is continuing unabated, with NSW RFA rules facilitating clear fell. The NSW Government proposes total clear fell of the steep catchments above 30% slope — something that is currently illegal. The infamous and despised cable logging, that decimated huge swathes of Tasmanian native forests, would destroy the refuge for wildlife in the process of being "expunged" (by logging) from the coast and lower hinterland strip.

In the South-Eastern bioregion, where 27,727 ha (45% of the gross area) can be logged, live 210 threatened species. Nineteen of these are not only bio-regionally, but nationally endangered, with some classified as "critically endangered" – one step from extinction – yet still the forests wherein they literally cling to survival are being clear felled.

Forest Corporation NSW’s (FCNSW) flouting of the Integrated Forest Operations Approval (IFOA), is well documented. Although only two State Government ministers have any authority to make FCNSW adhere to the IFOA, there being no mechanism for public complaint, the public till now could at least read/hear about the rules being broken. Increasing media coverage of illegal state logging and multi-million annual losses of native forest logging sector bothered now disgraced Liberal Premier Barry O’Farrell. In 2012, he instructed the Environmental Protection Agency (EPA) to "fix" the problem but without reducing Industry's annual supply, though the wood was not there.

Five RFA areas in Victoria are decimated at a rate of 5,500 ha p.a., despite the fact that 70% of Victorian forests no longer exist and 30% of species are "threatened" (with extinction). Its faunal emblem, the tiny Fairy (or Leadbeater's) Possum, is critically endangered, hanging for survival on the brink of extinction in an ecological community itself critically endangered. But the Mountain Ash Forests of the Central Highlands are "promised" to industry, so are still being clearfelled/converted.  With this and other illegal logging of RFA areas, extinction is on the cards also for three large forest owls, the glossy and the red tailed black cockatoos, the long nosed potoroo, the large brown tree frog, the spotted tail quoll, the greater glider and the list goes on. 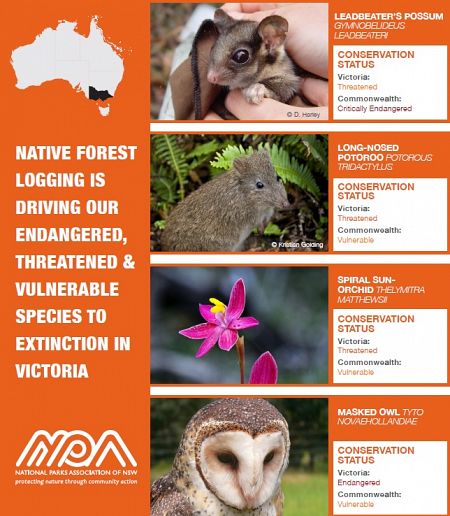 As in all RFA states, forestry is excluded from the usual environmental and planning approval requirements, denying Victorians statutory rights to legal action re illegal state logging. The Department of Sustainability and Environment (DSE), formerly responsible for regulating forestry activities, lacked a compliance and enforcement policy. Opinion was that its immediate regulatory successor would also lack a compliance culture, (One Stop Chop, 4.1.3, p.42)  The regulator, as of November 2014, the Department of Environment, Land, Water and Planning, has been compelled by forest activists to investigate illegal logging of rainforest by Vic Forests recently. The outcome could indicate whether non-compliance culture remains alive and well.

To enforce breaches, Victorians must approach the equity division of the Supreme Court but only if, as third parties, they can prove standing — have more than a 'mere emotional or intellectual concern'. Citizens working with scientists and legal teams have managed this four times. Forestry has been made to comply with individual instances of laws they are meant to follow. Yet citizens are "investigated" for daring to expose illegal state logging. Publicity, outrage ensues, but the logging has not stopped.

The whole of Tasmania is an RFA area, regulated through the Forest Practices Code with 'Agreed Procedures' between the Forest Practices Authority and the Department of Primary Industries, Parks, Water and Environment. As elsewhere, exempting forestry operations from normal state-based threatened species law is a primary extinction driver.

'It is unclear whether and how this process actually happens. What monitoring of efficacy of prescriptions for the protection of threatened species has been done? How adequate/defensible are the data to address the question of adequacy of prescriptions?'

The Tasmanian swift parrot population is 'on a trajectory to extinction'. Damage to habitat of one species places pressure on another in an intensely inter-related chain of impact. Logging destroys not only mammal, bird, reptile and aquatic species habitat — it depletes invertebrates, sources of the terrestrial and aquatic food chain and, as pollinators, critical vectors for the survival of flowering plants. Invertebrates comprise at least 95% of global biodiversity. 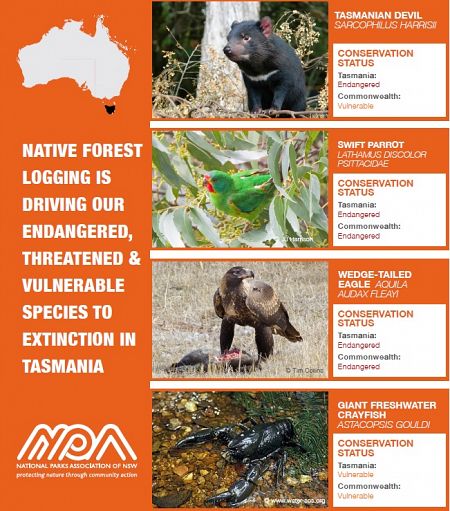 The prime minister "tore up" the Tasmanian Forest Agreement to protect 500,000 ha of world heritage nominated old growth (primary) forest upon coming to election, despite advice to the contrary from his own review panel. It was the first in his suite of pre-election promises to the Industry. The second is subsidising the forestry industry by allowing native forests to be included in the renewable energy target. The third is perpetual resource access via 20 year "rolling", "evergreen extensions" (the industry's words) of RFAs — coming soon.

Native forest biomass power is called "dead koala power" for a reason. The koala is now also declared nationally vulnerable to extinction. Australian forests and all they represent in terms of the biological richness of life on earth face accelerated mass extinction unless the LNP's Renewable Energy (Electricity) Amendment Bill 2015 is defeated. (For how, visit nativesrule.org)

You would think a decision of such magnitude might warrant a referendum. You would think with a global extinction crisis that is man-made, not to proceed.

It is up to us to prevent cross bench senators from allowing the LNP to honour its "deadly promise" to the Timber Industry. It is ecocide. It could happen within a week.

NO NF BIOMASS in RET Deal OR NO DEAL! If NF BIOMASS in deal then NO FORESTS. It's that simple as this will show https://t.co/kgTM7YEREP

Save the forests. Use less paper. Subscribe to IA online for just $5.