The failure of Exxon to act 30 years ago on critically important scientific information about human-induced global warming is a reflection on us all, says Peter Boyer.

THE PULIZER-PRIZE WINNING U.S. news service Inside Climate News (ICN) has just lifted the lid on a 30-year secret: how the world’s biggest oil company reacted to bad news about fossil fuels and climate.

ICN revealed last week that in the early 1980s, Exxon funded cutting-edge research which found that humans were causing global warming. Confronted with this, the company quietly ended the program and then went about casting doubt on the science.

James Black’s assessment of evidence for human-induced greenhouse warming was delivered to the Exxon board more than a decade before NASA physicist James Hansen gave his celebrated climate change warning to the U.S. Congress.

Black warned the company of significant warming by 2050 – as much as 10 degrees at the poles – and radical shifts in rainfall if fossil fuel use was not curbed. He wrote in 1978 that hard decisions on energy strategies could become critical within a decade. 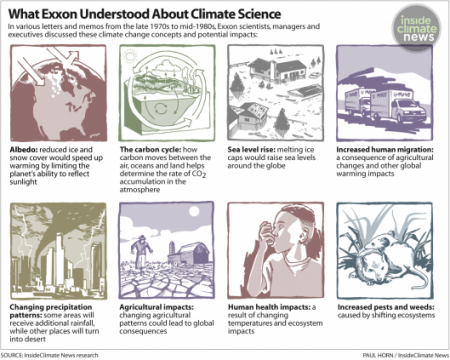 The company’s initial response wasn’t what we might have expected today. It launched its own climate studies, fitting out one of its supertankers with advanced air sampling equipment and employing scientists to work cooperatively with academic researchers.

In the early 1980s, the company supported publication of several world-leading research papers by Exxon and Columbia University scientists. It even funded an international climate science conference in October 1982.

Exxon research was the basis of a climate change primer circulated to senior staff in 1982. While pointing out areas needing further study, the primer said that 'major reductions in fossil fuel combustion' would eventually be needed to prevent 'potentially catastrophic events'.

All this was known to the company’s board more than 30 years ago, which then elected to say nothing about the research and carry on as if it had never happened. It was a fateful decision.

In those 30 years, about 650 billion tonnes of emissions have increased atmospheric carbon dioxide by 15 per cent to nearly double what it was in pre-industrial times. Warming has exceeded those early projections, with the global mean rising by around 0.5C. The 18 warmest years on the 134-year thermometer record are the 18 completed years since 1996. Last year was the warmest on record and this year looks like being warmer still.

(see Time to Wake Up: The Climate Denial Beast by Sandi Keane on Independent Australia)

One of those Exxon scientists, Richard Werthamer, recently reflected wistfully on how different things might have been had the company put its corporate weight behind a global effort:

“There’s virtually no country that it doesn’t have a presence in. It would have helped a great deal.”

Exxon might have chosen to publicise its research findings, persuade shareholders that the company should develop alternative energy sources and strategies, and lean on government to do the same. But that would have been a lot to ask in an era which legitimised corporate misbehaviour and rebranded greed as patriotism. So much easier to pretend nothing had happened.

Like all fossil fuel companies, Exxon remains opposed to effective measures to limit climate change, aiming to exploit every last molecule of its fossil fuel reserves. The same attitude prevails among politicians and governments wanting to retain these companies’ financial support.

In Australia and everywhere, legislated abatement measures like pricing schemes or direct action are repeatedly emasculated in the name of minimising business costs and protecting the economy. That is, sacrificing tomorrow’s profits on the altar of today’s. 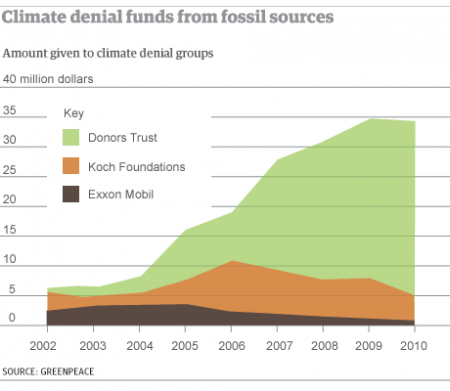 The libertarian notion that red tape is inherently bad and that business is best left unrestrained is another way of saying that business always acts in the public interest. And pigs fly.

This is written in sadness as well as anger. Voters support those mindless notions. Exxon’s failure reflects on us all.

This article was originally published on 22 September 2015 in SouthWind and is reproduced with Peter Boyer's permission.

The Exxon emails showing concern about climate change are even scarier than http://t.co/cRFFmBG299 being flash-based http://t.co/5PA3xr9slx

Fight back on the Turbull Government's inaction on climate. Subscribe to IA for just $5.