Dumping on the Reef: The Abbot Point disaster (Part Two)

With the decline of coal, the Abbot Pt redevelopment, which is set to add a layer of sludge to the Barrier Reef, is a financial disaster in the making, reports Lachlan Barker.

THE DOG OF A PROJECT

This term refers to any commercial asset put in place in the heady days of an upswinging market, but which then becomes unused when the market crashes.

The Abbot Point redevelopment has "stranded asset" written all over it.

In the first part of this series, I wrote of the plans for the redevelopment of the coal loading facility at Abbot Point, near Bowen in North Queensland.

This approval showed no respect for the democratic or legal process put in place to protect the environment.

It was an act of wanton destruction that left me – and, indeed, anyone with a remote concern for the health of the Barrier Reef – speechless with rage.

So in my researches I began to constantly come across the need to get a handle on the minister's psychology.

I would chat with friends and acquaintances, and eventually I would ask this question:

"Can you possibly tell me why the Minister thinks this is a remotely sane way to proceed?"

All replies were the same.

"He obviously thinks he is going to make a lot of money out of this."

So I decided to take a look at the finances around the Abbot Point redevelopment, and the nearby Galilee Basin coal fields, which the redevelopment is to serve.

When I did, I discovered a tale of financial woe.

To mine the coal of Galilee profitably it has to be sold for A$110 [US$100] per tonne. This was stated on Radio National's Background Briefing by UBS global commodity analyst Daniel Morgan.

Morgan then went on to say:

"Our long-term estimates for thermal coal prices are [A$90] US$80 per tonne, so even on our long-term prices it [the Galilee Basin coal field] doesn't look like a compelling project to us."

He makes the point that falling demand, particularly from China, could mean that the coal price never attains the levels that are needed to make the Galilee Basin profitable.

So why is demand from China falling?

Ben Caldecott points out that with the burgeoning freedoms of the Chinese people, demand for cleaner air is increasing in volume.

Another factor is China's access to local shale oil gas.

China is using this energy resource in increasing volume, and again, has less need for imported coal.

And finally, in a lesson from our giant northern neighbour, increased use of energy from non-fossil sources, wind and solar mainly, is also decreasing China's demand for our coal.

Since China currently takes forty seven per cent of the world's coal, clearly, if their demand softens, then Australia's income from this market drops with it.

The Background Briefing story is entitled: 'The Abbot Point Gamble' — and so it is.

If destroying a part of the Barrier Reef was going to be done for sure and certain profit, that would be inexcusable enough, but when profits are uncertain at best, it goes beyond reprehensible.

Additionally, another threat to Australia's exports to China has entered the game — Russia.

Russia is currently the sixth largest coal exporter in the world, but plans to be number one.

A recent story in the China Daily states:

'China has said that it hopes to work with Russia on natural gas and nuclear energy projects, increase coal and electricity imports from the country and expand cooperation in renewable energy and energy-efficiency projects.'

The same story also tells us that Russia is

'... building a new port in its Far East region with annual capacity of 140 million tons. That volume would largely satisfy the demand of the Asia market.'

So with all those threats to Australian coal exports, the most likely outcome is that the facility at Abbot Point, redeveloped or otherwise, will become a stranded asset.

The metal piers will become a forlorn clump of decaying industrial infrastructure on the shores of a dead reef.

If this was a horse race, the odds on the Galilee Basin making money would be 1,000 to 1 and lengthening.

To use another analogy from the 1987 movie Wall Street.

We at IA are Bud Fox, while the State and Federal governments are Gordon Gekko, (and believe me that part of the analogy is exact), we would be saying this:

"Gordon, when it comes to coal, I advise you to get out NOW!"

So having demolished profit as a reason to add to destruction of the Reef, it was time to be ignored again.

I contacted Greg Hunt and sent this to his press secretary:

Dear Jared.
It is currently not profitable to mine the Galilee Basin for coal.
Commodities brokers say the price of export coal has to be A$110 to be profitable.
The current price is A$82, and demand from China is softening, so this price may never regain the A$110 level.
Would it not therefore be prudent to hold off on the Abbot Point redevelopment at this time?

I received no response whatsoever.

And since we're on the topic of finance, here's some other calculations.

I couldn't drill any further into coal specifically, but we'll work with this overarching figure.

What's more, one source indicates 80 per cent of Australian mine workers are fly-in-fly-out.

Thus, there may only be 15,320 mine workers permanently on-site in Queensland.

Compare this with tourism.

Tourism in Queensland directly employs 122,000 Queenslanders, which equates to 5.7% of employment in the state. Indirectly, another 100,000 owe their employment to tourism.

For tourism in Queensland read: the Great Barrier Reef.

So a larger – by far – number of employees in Queensland owe their living to the Reef.

The conservative governments, state and Federal, are always telling us that they are the only ones who can manage money. That only they can get the economy humming.

Well, if I was the Queensland treasurer, I would be doing anything I could to make the Reef more beautiful tomorrow than it is today.

I would be preserving this most fragile of eco-systems so that nearly a quarter of a million Queenslanders could keep their jobs and keep paying their taxes. These workers could then buy petrol at the local station, shop at the local markets, and rent rooms and buy houses in the nearby towns.

All of which does far more for the economy than digging up coal and selling it for ever narrowing profit margins overseas.

You don't have to destroy a little bit of the reef every time you take tourists to see it.

Now, to be fair, the history of tourism is littered (sadly) with examples of operators who flouted environmental regulations.

Oil leaking from boats, sewage discharged from hotels into rivers, waste buried in the ground instead of being correctly disposed of, are some examples. And the aircraft that bring tourists do,  with their emissions, add to global climate change.

I accept all that, but reiterate, correctly managed tourism is eminently sustainable — a country mile more sustainable than coal.

So the Abbot Point redevelopment is a dog of a project financially. Why then is Greg Hunt the only one who doesn't seem to know that?

In the final piece in this series, we will deal with Greg Hunt's ludicrous attempts to make us think he cares about the Reef.

I will demolish and expunge his joke of a plan to remediate the damage done to the Reef by this development.

And finally we will hear from voices of sanity — GetUp! and Greens Senator Larissa Waters.

Read more by Lachlan Barker on his blog cyclonecharlie88.blogspot.com.au. 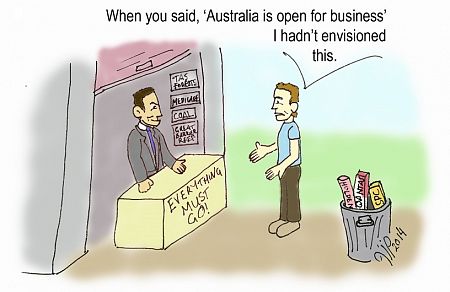