A GROUP OF LEADING clean energy innovators including such big names as Tesla, ABB, AGL Energy, FRV and Enphase Energy have teamed up with the Clean Energy Council and signed an open letter calling on the Australian Parliament to protect the funding of the Australian Renewable Energy Agency (ARENA), which stands to be wiped out if the Turnbull Government’s Omnibus Budget Savings Bill is passed.

As we have reported since back when the sleight of hand policy was first flagged, $1.3 billion of the agency’s grant funding is at risk under the Turnbull Government’s omnibus bill.

The letter reiterates what many have already stressed — that slashing the agency’s grant funding would be at odds with the Government’s innovation agenda and – if supported by Labor – a reversal of the ALP’s long-standing support for the agency, which it set up under the Gillard Government.

Here’s what they wrote… 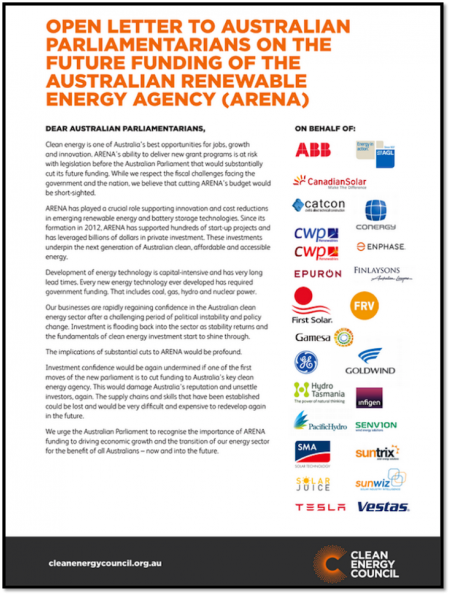 More information on saving ARENA is available from GetUp! here.

This article was originally published in RenewEconomy on 8 September 2016 and has been republished with permission. You can also follow Sophie Vorrath on Twitter @sophvorrath.

HUGE NEWS: ARENA has announced 12 new projects that will triple the amount of large scale #solar in Aus! #SaveARENA pic.twitter.com/aNy790Jcrc