The troubled CSG industry is currently facing strong community opposition in two states — not that Santos, QGC or Origin care diddly-squat given they snubbed the Senate inquiry. Lachlan Barker investigates.

Currently in both NSW and Queensland, groups of local residents are expressing their implacable opposition to coal seam gas mining (CSG).

In Queensland, independent senator Glenn Lazarus is chairing an inquiry into the effects of CSG on those that live in the gas fields.

Currently the inquiry is on the Darling Downs with the committee hearing from the residents of Downs of the nightmare of trying to live in the gas fields.

The most notable words to come from the inquiry in Dalby on Wednesday 17 February were the CSG industry being labeled:

Also harrowing beyond words was the description from local farmer Narelle Nothdurft describing the migraines her children suffer.

It’s on the linked Channel Ten news story, and brings tears to your eyes.

Both are interesting quotes as they put to bed the oft repeated assertion from supporters of the industry, e.g. Australian Petroleum Production and Exploration Association (APPEA), that there is happy co-existence in Queensland between farmers and the gas industry (like the lie told by Santos in NSW which was exposed by IA's dep editor, Sandi Keane in 'Sneaky Santos caught out in CSG con').

Now, there may be some farmers who were, and are, happy to have the CSG industry on their land, but they were glaringly absent from Senator Lazarus’s inquiry hearings in Dalby.

Also, never forget that Queensland whistle blower Simone Marsh told us that the industry should not even be allowed to continue, as it was set up in a corrupt fashion.

One of the major issues the residents of the Downs have –  and is symptomatic of the above mentioned corruption – with CSG is that there were no baseline studies done before the first wells were drilled.

This allows the gas industry to say, to the eternal frustration of the locals, that you can’t prove we did this damage. 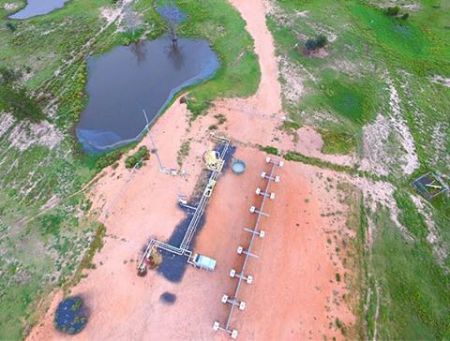 Jeremy Buckingham: 'A shocking photo of oil and chemical leaks from a Queensland CSG well' via his FB.

While the damage done by the CSG industry in Queensland is there for all to see, the industry continue with their puerile assertion that due to there being no baseline studies, this damage can’t be laid at their door.

Also on the inquiry is Queensland Greens senator Larissa Waters, she said via emailed statement:

It’s time to end the dangerous experiment with our land, water and climate that is CSG and underground coal gasification.

Underground Coal Gasification (UCG) is the nightmare process of gasifying coal underground and collecting the escaping gas for fuel.

Linc Energy is currently facing court over their UCG project at Hopeland on the Darling Downs. This project, it seems, ignited underground, and is now burning unchecked metres below the formerly fertile soil of Hopeland.

Big mining companies are steam-rolling over regional Queensland families, who still do not have the right to say no to coal and gas on their land.

Farmers deserve the right to say no to protect their land, water, climate and, crucially, their families’ health and wellbeing.

The Greens are proud to stand with farmers for the right to say no and an end to unconventional gas mining, unlike the other parties which take donations from the big mining companies.

South of the border in NSW, CSG is also facing determined resistance from the residents of the Pilliga in north western NSW.

There CSG company Santos is attempting to build a CSG gas field with associated infrastructure.

However the local residents of this area are enraged that such appalling destruction of the Great Artesian Basin (GAB), with its life-giving water, is taking place.

So, not ones to take this lying down, they went out to the Pilliga, set up camp and plan to stay as long as it takes until Santos gives up and goes home. 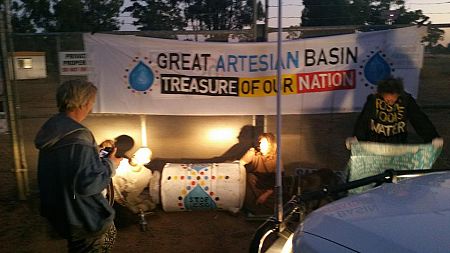 The Pilliga protectors are in for the long haul as dawn breaks outside Santos construction site. Photo: Liam Ski via the Pilliga Push group.

Legally the crux involves the construction by Santos of a water treatment facility at Leewood.

Santos claims that this facility is part of the exploration phase and so does not need a gazetted Environmental Impact Statement (EIS).

The opponents claim that a facility of this size is clearly being built for the production phase of the project, and thus does need an EIS, which would allow the local community to input on the project.

That legal point is in court with a decision yet to be handed down, and thus the residents are incensed that Santos has started construction. "How can Santos begin construction of this facility when the court may rule against it?" is their (perfectly justified) complaint.

However, overarching even that is the simple fact that the Santos Pilliga project is not economic in any case. So why is Santos persisting?

I went to the website of Australian Energy market Operator (AEMO) and got the documentation on gas, the Gas Statement of Opportunities (GSOO).

There I discovered that the cost of producing gas in the Gunnedah basin is minimum A$6.53 a gigajoule (Gj). 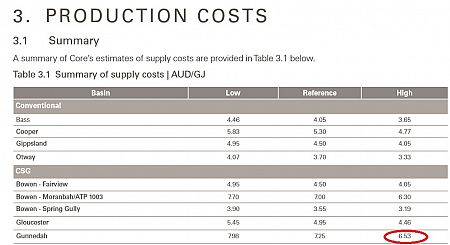 Piping this gas to the industrial centres of the NSW coast would cost $0.85 a gigajoule.

However the current spot price for natural gas from the Office of the Chief Economist (OCE) is $3.25 a gigajoule.

Thus Santos would be losing around four dollars per gigajoule to produce gas at Pillaga and sell it in Sydney.

However, another point of fury among the residents of the north west is that they claim this “gas for NSW industry” is a bare faced lie on the part of Santos. The residents say that any gas produced at Pilliga would be piped north to Santos’s Liquefied Natural Gas Plant (GLNG) at Gladstone, thence to be exported to Asia. 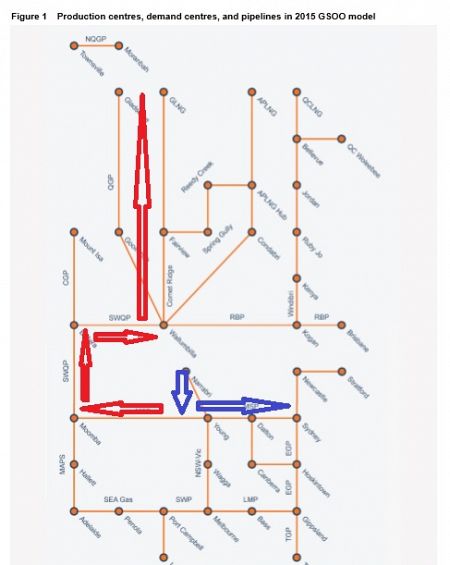 But if this is what Santos is preparing to do – and all evidence so far shows that is the most likely scenario – then that is similarly bad, financially, for Santos.

For then they have the ~A$7-7.50 cost of production and piping, with the cost of liquefaction and shipping ~A$5, on top of that.

A full cost of exporting gas of ~A$12-12.50 a Gj, since the current spot price of gas in Asia is A$9 a gigajoule, and with Santos’s contract price received for their gas around a dollar higher than that at A$10, then once again they are losing ~A$2-2.50 per gigajoule exported.

So, in any direction, Santos can’t make money on the Pilliga.

Why they persist we cannot imagine, however in closing I will say this:

When Santos saw the protectors of the plain arrive on that first morning they thought these “unwashed hippies” would make a few shambolic, symbolic protests then go home and let Santos get on with it. 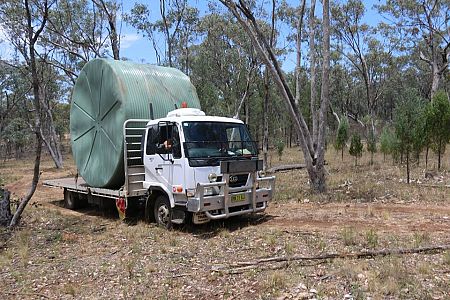 Not so, the protector camp is set up, with adequate water supply, and the Pilliga residents are planning to stay on the plains until Santos leaves.