THE NATION IS IN THE BALANCE.

At the last election, some 45.6% of Australians fell for a slick operator spouting a bunch of three word slogans, without a hint of genuine policies. Since then, we have seen a nation in reverse, with industries and jobs moving overseas and Australia's efforts at climate change mitigation being progressively dismantled.

Western Australia has the potential to redeem us by helping to keep our politics in the 21st century.

Will all the remaining positive measures enacted by the previous government be reversed by the Abbott Government with the assistance of a ragtag bunch of far rightwing minor party senators — or will the WA half Senate by-election allow us to at least recover something from the wreckage?

The nation's credibility and economy is in the hands of Western Australians.

Climate change economist Professor Ross Garnaut, far from a leftwing radical, has weighed into this coming weekend’s election with some valuable arguments for West Australian’s to factor into their decision — above and beyond traditional alliances. Other experts have also weighed in.

Therefore, not only does the Government lose substantial revenue through scrapping the carbon price, taxpayers will be handing over a significant amount to polluters from the existing tax base — assuming no additional tax burden is added.

He is, of course, correct.

The Australian Bureau of Meteorology recently released their report, State of the Climate for 2014. In this, the Bureau found that the south west wheatbelt and biodiversity hot spot region of WA has seen a pronounced decrease in rainfall over the past decade. 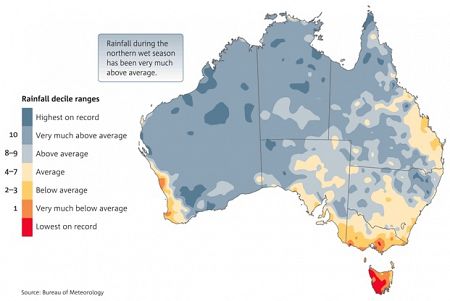 October to April average rainfall since 1995 compared to the long term average since 1900. 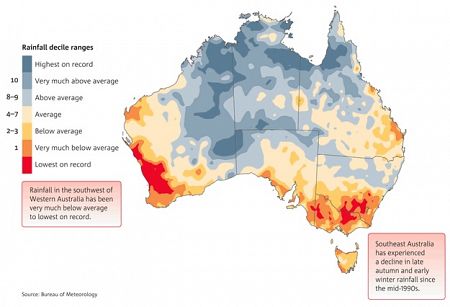 April to November average rainfall since 1995 compared to the long term average since 1900.

While Prime Minister Tony Abbott persists with the “drought and flooding rain” narrative, the data is telling a different story.

This is not some predictive model of future scenarios; we have been witnessing a persistent shift in our rainfall patterns over the past decade and a half.

Much of southern Australia has a lot to lose with further unmitigated climate change.

Western Australian food production and local biodiversity – much of which is found nowhere else in Australia – is directly at threat from changing climate.

Solving a problem by making a bigger one

Worse than that, Direct Action is expected to be a bureaucratic nightmare.

The Australia Institute has estimated that a workforce of several tens of thousands of highly skilled public servants would be required to manage the technical applications alone.

Economists Frank Jotzo and Paul Burke from the Australian National University, have explored the meagre detail that exists to support the Direct Action Policy and have emphasised the otherwise avoidable complexities should the carbon price remain in favour of Direct Action.

They concluded their article with:

'From an economic point of view, it is a great shame that carbon pricing has become so politicised in Australia. If the parliament does revoke the carbon price – as appears likely – and Australia ends up not making a reasonable contribution to the global mitigation effort, we will set a terrible example internationally.'

This is something that the carbon price is focused towards — in being the first step of an emission trading scheme with the European Union.

This last six months was a 'probationary period' for this current government. The redo of the election gives Western Australians a unique and powerful chance to issue a report card of the current Government and also influence the crucial makeup of the upper house over coming years.

Issues Westerns may wish to reflect upon are:

Direct Action also raises concerns over how well it can be administered. It also affects how we will be perceived by other nations. We have already earned the title “Colossal Fossil” due to the non-attendance of our environment minister at the last global climate change talks in Warsaw (COP 19) last year, as well as for this Government's retreat on climate change action.

Can WA redeem us?

The current Senate has previously blocked this current government’s attempt to remove the carbon price, something Professor Garnaut said we “can all be grateful” for.

Both the Greens and Labor have continued to stand against removing the carbon price. Both parties have stood against paying polluters. Both parties continue to support a simple free-market solution that would see Australia working with the European Union towards a low-carbon future.

In short, voting for parties that stand for the carbon price is voting for Australia’s best chance of climate change mitigation and the preservation of current food production and unique biodiversity — something Western Australian’s know a lot about.

The March in March saw people from across the political spectrum united for a better Australia.

In much the same way, a vote against the Coalition is a vote for Australia — a better Australia, that may give future generations a climate as much like ours as is now possible to achieve.

7 March 2014, 12:00pm The Government's creed of 'personal responsibility' is all about fobbing off its ...
Join the conversation
comments powered by Disqus
News updates