The climate debate is over, so debating the science of climate change with skeptics is fruitless. Jeff Schiller explains the way forward.

HERE AND ELSEWHERE, there has been renewed enthusiasm to tackle the problem of climate change.

Commentators have asked what has happened to the public debate.

It’s dead, as it should be.

That is not to include some excellent online educational outlets and annual reports of the latest research. These are brilliant resources that must inform our activity here on. However, the so-called “climate debate” has been tried and is proven to be a bad tactic.

Muck is all that is needed to muddy the water

People are persuaded by an emotional response before reason even comes into it. Being an unconventional environmentalist primarily focused on sustainability, I’ve found that evidence is fairly impotent on individuals who have a strong ideology — whether it is Left or Right.

A batty English aristocrat can do more damage to informed public discourse with fear propagation of secret UN plans to murder the majority of the global population than a cool, reasoned and measured rebuttal could ever undo.

The X-files are far more entertaining to a primed audience than the science journal.

What’s worse, when the scientific community publicly debate such figures they accidentally lend credibility. Placing a century and a half of critical observations on the same plate as a hidden communist plot to control the world is insulting to our hard won understanding of the known universe.

The former proposal has been critically derived through tedious, self-correcting measures, while the latter could have been plucked rapidly from some nether region.

This is why the climate debate is doomed to work against mitigation and adaptation; it favours the easy option — to lie. 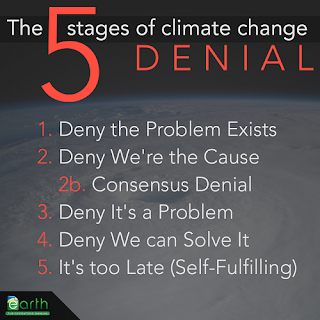 As the fossil record has become increasingly filled in and detailed, the most astounding thing has occurred: the creationist community has found more gaps, not less.

With all the research done since Charles Darwin, the ever increasing body of evidence has in fact solidified the creationist’s belief that evolution is wrong.

From the uproar over minor typos in the fourth IPCC report to the supposed 16 years of no trend ‒ little comfort when one realises that it has included the warmest decade on record ‒ the climate sceptic has only hardened their resolve against it. As climate science becomes more certain of anthropogenic climate change, the climate “sceptic” is more certain of a scam.

While it might be entertaining to challenge creationists — with climate change, we don’t have a century and a half of comfortable playing space.

What can we do?

Words have their value, but are distinctly hobbled by unreasonable doubt and fear-mongering. Recent history shows us that words are wasted on the rejectionist.

Luckily, there are avenues that are building up momentum that can make for meaningful change.

On IA, Michael Marriott recently provided us an example of this — lock the gate and head to the street. Throughout history, people across the globe have illustrated their power in numbers when sufficiently disempowered by authority. We are not so lucky in this country to have a government that stands for us universally and for the best available evidence.

Peaceful protest is an excellent way to show what the community actually stands for, rather than leave it to News Corp and politicians tell us.

If you believe the age of fossil fuels is passed its prime — marching this March is an excellent way to express that.

Another avenue is to engage with movements, such as 350.org and even The Sustainable Cities Collective. Both provide evidence of communities and private bodies making meaningful steps to improve their activities. If initiatives are in your local area, get involved. If they aren’t, contact the coordinators to find out how you might be able to start a node locally.

Another initiative that has gone out of fashion, but could be immensely powerful, is that of the “carbon footprint”. If there was a call for an objective and regulated stamp on items that indicated the “carbon cost”, we could have a consumer driven motivator for low carbon consumables.

Lastly, waste is perhaps the most overlooked area.

It is staggering that steel and aluminium could ever end up in landfill after so much energy is used in its production. The same must be said about most consumables.

Sure, recycling is good — but it is still energy intensive. We have an underexploited industry for the innovators to explore — re-use.

The ABLE project is one great example of this.

Action is all that is left when words fail us.

And of the climate debate…

Here is my suggested reply to the next rejectionist engages you in a “debate”:

Would you mind submitting your hypothesis to the peer review process? If it survives, you will have my full attention. If not, it is about as valuable to me as the idea of the moon being made of cheese.

You might need to repeat it a few times.

The rejectionist avoids critical analysis. If a new car avoided safety checks, would you buy it? 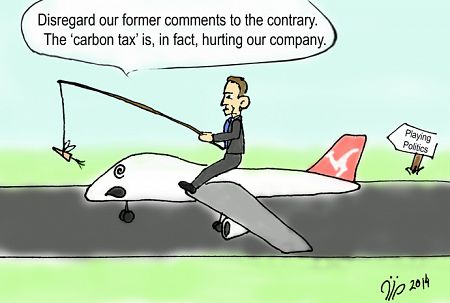 7 March 2014, 12:00pm The Government's creed of 'personal responsibility' is all about fobbing off its ...
Join the conversation
comments powered by Disqus
News updates