Biomass: A burning issue for the beleagured RET

The Abbott government's addiction to fossil fuels won’t matter if the financial tap is turned off. Peter Boyer looks at the government's sudden new proposal of including wood biomass and declares it neither "clean" nor "renewable".

FIRE AND the fuels that feed it have been our bosom companions for as long as we’ve walked the earth. Maybe, after all those millennia sitting around the flickering flame, fire is part of our DNA.

That may help explain why, knowing how carbon-based fuel emissions affect the climate and being fully aware of viable alternatives, we continue to burn coal, oil and gas at an increasing rate. And why we still clear and burn forests.

This last activity suddenly came back into the picture last week with a new proposal from the federal government that burning residue from forest operations should be defined as a source of renewable energy for the purpose of achieving Australia’s 2020 target.

The idea appeals to state MPs from both major parties, as if it’s the silver bullet to lift the industry out of its deep and abiding morass. But forest biomass energy has its own set of problems.

For a start, it’s neither renewable nor clean. Long-established biomass plants in the U.S. have been shown to degrade forest carbon stocks and are frequent offenders against air pollution laws. Add to that handling and transport fuel costs to get the waste to generators and it’s looking very dubious.

A threat to native forests and human health; just two of the reasons burning wood waste should not be included in RET http://t.co/jih4Gp3HTK

Industry advocates hungry for ideas may be tempted, but if they set out down this road they face a lot of trouble and strife for very little return.

It’s a dumb idea, and its chief political proponents know it is. They don’t care about forest biomass energy; their main aim is an ineffectual renewable energy target. Here’s hoping they fail in that aim too.

What of fossil fuels? The companies that produce and burn coal, which remains the biggest single source of carbon pollution, back carbon capture and storage (CCS) to sort everything out. But we have little to see for billions of dollars invested in CCS, much of it coming from public sources.

The designers of 16 large-scale CCS projects operating or being constructed around the world today plan for them to store a total of 36 million tonnes of carbon dioxide in a year. That amounts to less than 0.1 per cent of current fossil fuel emissions.

CCS won’t fix the problem and we must stop pretending it will. Recognising this, the International Energy Agency advises that the only way to keep below a dangerous 2C of warming is to prevent most of the remaining coal, oil and gas from being burned.

If this were to happen, currently-undeveloped coal reserves such as Queensland’s vast Galilee Basin would have to stay untouched, and BP and others will have to be told they can’t exploit deep-water oil and gas deposits in the Great Australian Bight. Can you see that happening?

Fossil fuels are the life-blood of Australian governments, as they are of the corporations that mine them. They say they accept that burning fossil fuel destabilises the climate but they don’t dwell on it. Perhaps they figure they won’t be around when the climate has the final say.

There’s an alternative scenario. The coal, oil and gas industries discover that they can’t raise the huge amounts of money needed to develop new reserves. Their capital dries up as banks turn away. If they’re smart they cut their losses and get out; if not they collapse and die.

Published by the The Guardian 16 March 2015 as part of its 'Keep it in the Ground' divestment campaign.

The University of Tasmania has one of Tasmania’s larger investment portfolios. A study by a group called Fossil Free UTAS has found that in the 10 months to the end of April 2015, the falling value of fossil fuel investments cost the university nearly $93,000.

The UTAS stocks reflect a global decline in fossil fuel investment. Coal stocks are now worth less than a quarter what they were in 2011. There’s reason to think the industry is close to an endgame.

So should universities divest from fossil fuels? Should banks support coal mining? These and other questions are being posed in “Raise the Heat”, a global campaign instigated by U.S.-based 350.org. 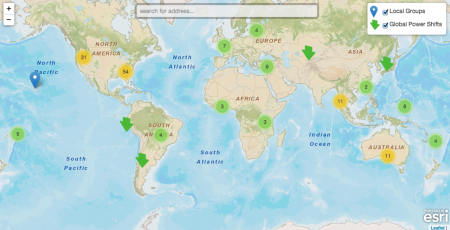 In Hobart at 6.30pm this Thursday 21 May 2015 (Stanley Burbury Theatre, Sandy Bay), a panel of representatives from 350.org, the University of Tasmania, the legal profession and the superannuation industry will debate the ethics of investing (or not) in fossil fuel.

At 12.15 pm on Friday 22 May 2015, there’s to be a public demonstration outside Commonwealth Bank offices near Elizabeth Mall, Hobart, where Hobart financial adviser Stuart Barry will speak about the power of consumers to change banks’ attitudes to coal and other fossil fuel investments.

For details of fossil fuel divestment campaigns in other states, check out 350.org.au.

This article was originally published on 19 May 2015 in SouthWind under the heading 'Our love affair with burning stuff' and is reproduced with Peter Boyer's permission.