ABU DHABI: French energy giant Engie, the owner of the Hazelwood brown coal power generator in Victoria, has launched a major public-private initiative that aims to ensure that 1,000GW of solar capacity is installed around the world by 2030.

The plan has been dubbed the Terrawatt initiative – the equivalent of one trillion watts of solar electricity, or one million megawatts – and it is the first significant engagement from the private sector to deliver on the ambitious climate target agreed in Paris in December by 195 governments.

The 1,000GW target might be below some of the more optimistic forecasts for 2030, particularly those by Greenpeace and others (and it should be noted that Greenpeace, which predicts up to 1,800GW of solar, has been the most accurate forecaster in the last 10 years).

But it is broadly in line – and in some cases even passes – with the target that institutions such as the International Energy Agency says is needed under its 450 scenario, which would achieve a 2C temperature cap. The Paris deal aims at “well below” 2C, and even to try and reach a 1.5C cap.

There has been some considerable doubt about whether the promises made in the Paris agreement will translate into action by individual government at policy level, and by the private sector in investment. 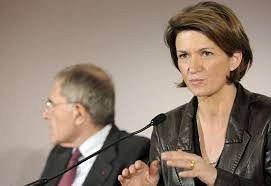 The fact that this initiative is driven by Engie – a major utility – makes it even more interesting. It might be dismissed as greenwash by some, and time will tell if it is or not. But by making such a major commitment on solar, its incoming president and CEO, Isabelle Kocher (pictured right), is nailing her colours to the mast.

Engie is a giant of a company, with operations in 70 countries and 150,000 employees, and – probably embarrassingly for its new focus on sustainable energy – it operates Hazelwood, the ageing generator that is labeled the dirtiest in the world. It is proving to be an embarrassment to a company hoping to be taken seriously on its commitment to a new energy future.

Kocher, who takes over in April, is seemingly firmly committed to effecting that energy transition, both within her own company and in the global energy system.

Last year, she spoke of solar as the “energy of the future,” saying it was no longer a subsidised niche, and she predicted that decentralised energy – rooftop solar and battery storage – will provide more than 50 per cent of power generation.

“As energy solutions become smaller and smaller, so energy itself is becoming increasingly local: looking to the future, more than 50 per cent of energy generation will rely on local sources.”

At the launch of the Terawatt initiative at the World Future Energy Summit in Abu Dhabi this month, Kocher said:

We believe in the solar potential. The resource is available. The technologies are affordable. They are full of hope …for the planet, for humanity, but it won’t happen if we are not fully mobilised.

We need to identify ways to implement solar technologies at large scale, not incrementally, but at a massive scale.

Hope Engie are planning some solar projects in Vic. With Hazelwood on their books, they need to clean up their act. https://t.co/0khP50lX69

That is the main focus of the Terrawatt initiative, which is not an investment vehicle, but a partnership with the likes of the International Renewable Energy Agency (IRENA) and others to ensure there are no roadblocks.

In a brief discussion with RenewEconomy, Kocher said the biggest impediment to the solar sector was the regulatory framework, which in turn was holding back finance.

“The regulatory framework … is not designed today to make it easy for large installations of solar,” Kocher said. “We need to work on that. The solutions exist and it is not impossible to master.”

It was these hurdles that could mean that many private forecasts – of more than 100GW of solar capacity additions a year from 2020 – from achieving reality.

The initiative is also a sign that the hoped for participation of the private sector in delivering on the ambitious targets agreed in Paris may in fact become a reality.

The initiative was launched in Abu Dhabi with the local energy minister and Laurent Fabius, the French foreign minister who guided the recent Paris talks to its successful outcome.

You've got to be kidding. Bad form from @ENGIEgroup, the co that refuses to pay a $18m coal mine firefighting bill. https://t.co/jPEQaEQxpJ

IRENA secretary general Adnan Amin said the involvement of the private sector is critical. “This is the way of the future,” he said.

IRENA argues that renewables can deliver more than half of the efforts needed to keep the world on track to its 2C targets by 203o, with energy efficiency doing much of the rest. It also argues that these efforts will deliver significant economic, employment, health and environmental benefits.

IEA’s head of renewable energy Paulo Frankl told RenewEconomy that the initiative helped to bring momentum from the historic Paris agreement into reality.

We need the participation of the private sector in this effort. The Terrawatt initiative is in the order of scale that needs to be achieved in the coming years.

“Maybe we will do better than that. At least this puts us on right path to limit temp increase to less than 2C.

Which then leads to the next question. What will the likes of Engie and others do with the massive, and massively polluting brown coal generators in Australia’s Latrobe Valley and elsewhere.

The end is inevitable, but when and at what cost remains the question. That is why major utilities have had to split their assets – separating the centralized fossil fuel generators from decenetralised renewable energy assets, storage and energy services.

They reason there is no way to marry the past with the future. It will be interesting to see if Kocher finds herself making the same choices.

This story was originally published in RenewEconomy on 19 January 2016 and has been republished with permission. You can follow Giles on Twitter @GilesParkinson.

Don't be fooled by climate spin. Subscribe to IA for just $5.