ARENA shortlists 22 renewable energy projects for $100 million funding with solar projects falling well below its benchmark. RenewEconomy's Giles Parkinson reports noting that the Turnbull government is yet to withdraw legislation seeking to close down the CEFC and ARENA.

HYBRID PROJECTS that feature both solar and wind and other energy technologies feature among the 22 projects shortlisted for a total of $100 million in funding from the Australian Renewable Energy Agency (ARENA), which also suggested that solar project costs would fall below $A100/MWh by 2020.

ARENA on Thursday said the 22 projects — totalling some 767MW in capacity, had been invited to progress to the next stage of its $100 million large-scale solar photovoltaic (PV) competitive round. These projects may also qualify for debt finance from the Clean Energy Finance Corporation.

Among the companies making the shortlist are Origin Energy, Infigen Energy, and other Australian players including Genex, APA, Windlab and Ganawarra Solar. It also includes a host of international players, including Canadian Solar, Suntech, FRV, Juwi, Neoen, and Ratch. (See below for full list).

The CEFC and ARENA are two of Australia's biggest drivers of innovation in renewables and the PM wants to axe them.

ARENA said some project bids suggested costs well below its benchmark of $A135/MWh, and suggested costs in Australia would head below $A100/MWh (US$71/MWh) by 2020. That is still well behind costs elsewhere in the world – particularly the U.S., India, China and Latin America – but suggested Australia could start to catch up.

Another of the interesting aspects of the tender is the proposal that will combine solar PV with other technologies. Goldwind want to site a solar farm next to its proposed White Rock wind project, Infigen is looking to do the same next to the Capital wind farm, and Windlab is looking to combine wind and solar at the Kennedy hybrid complex.

Genex, meanwhile, is looking to combine solar PV and pumped hydro, while Ratch is considering solar PV with a range of other technologies at Collinsville, where a coal fired power station has been closed down.

ARENA CEO Ivor Frischknecht said the expression of interest (EOI) phase had attracted strong interest, including several new entrants to the market, and the overall quality of proposals was high. And the costs proposed included some “significantly below” the cut off of $A135/MWh.

In a statement, he said:

Each project was able to demonstrate its cost of energy was below the threshold of $135 per MWh, with some projecting costs significantly below this threshold level.

More than three times the amount of funding available through the ARENA competitive round has been requested for the 22 projects, with an ask of approximately $332 million for projects totalling $1.68 billion.

The strong interest and high-quality applications demonstrate Australia is serious about deploying large-scale solar and capitalising on its abundant solar resources.

ARENA’s $100 million competitive round was announced on 9 September 2015 and is designed to bring down costs through the deployment of 200 MW of large-scale solar PV.

Frischknecht said the funding round was well timed to drive innovation and reduce solar PV supply chain costs in Australia, where large-scale solar was still in its infancy.

It is clear that large-scale solar has the potential to become one of the most competitive forms of energy in the world.

It is also clear that, despite our significant solar advantages, Australia has some work to do to catch up to countries with more mature large-scale solar industries – our grid-connected large-scale solar capacity will shortly reach 240 MW and is generated by a only a handful  of solar plants.

Through this competitive round, ARENA’s support will ensure a series of large-scale solar projects get off the ground and will help move large-scale solar costs in Australia further down the cost curve, potentially to less than $100 per MWh by 2020.

ARENA plans to publish aggregated analysis of the EOIs in February to provide the sector with insight about cost and generation parameters.

The tender results were jointly announced by environment minister Greg Hunt, who described it as the “Turnbull government’s $350 million commitment”. The Turnbull government is yet to withdraw legislation seeking to close down the CEFC and ARENA.

The funds were drawn from budgets allocated under the previous Labor government. ARENA’s funds were cut back by the Coalition government.

Is this why the Coalition under Turnbull won't rescind the ARENA and CEFC repeal Bills? Great piece from @readfearn https://t.co/KHa2lQhZgu

These projects have been invited to submit a Full Application.

22 high merit projects have been selected to proceed to the full application stage. The projects are located in all mainland states and have a total capacity of 766 megawatts (MW). 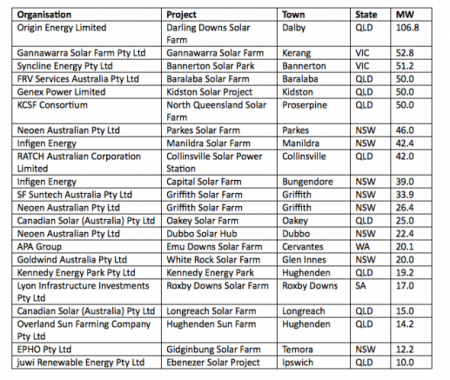 This story was originally published in RenewEconomy on 14 January 2016 and has been republished with permission. You can follow Giles on Twitter @GilesParkinson.

Don't be fooled by the COAL-ition's climate spin. Subscribe to IA for just $5.