Alpine grazing and the cryptogamic layer

After an ultimatum from the Federal Government, the cattle were moved out of the Apline National Park last week. Sandi Keane talks about the effects of cattle grazing on the fragile "cryptogamic layer".

The 400 cattle are now out of the Alpine National Park and safe from harm (or doing harm) inside fenced paddocks for the winter. Come Spring – the Victorian Environment Minister, Ryan Smith, told ABC Local Radio last week – the trial will continue.

So, if you were one who contributed to the avalanche of protest letters to The Age, here’s a chance to hone your skills, increase your vocab and impress the hell out of your friends as you get ready for the next round. Editors will be looking for something new, something you didn’t mention in Round One — something that will intrigue them, send them to an encyclopedia….a new slant!  (I learned this from Googling “how to get my letters published in the media".) 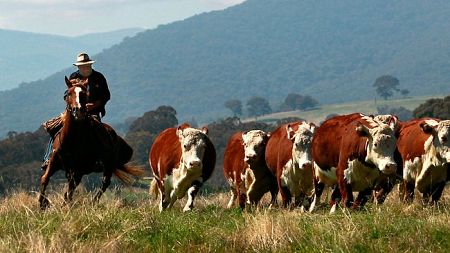 So, today, we will be learning a new word. CRYPTOGAM!

This word, combining Greek crypto, hidden; and gamos, for marriage has long been the preserve of botanists, ecologists and soil experts — called “pedologists” (another handy bit of ammo to impress the reader of your impeccable knowledge on the subject). Just like “Biodiversity” used to be! Back in the 80’s it was a new word. Type the word into Google now and you get 18,700,000 sites.

So stay with me, don’t doze off while we deal with the important scientific bit. The cryptogamic layer of the soil is that thin part of the topsoil which is composed of thousands of living organisms: plants called cryptogams — the mosses, lichens, ferns, mushrooms and other fungi and tiny little flowers, and animals called cryptozoa—tiny, hidden animals, many of which are insects.

It’s what the plain vanilla set (like farmers and us urbanites) call TOPSOIL! Many farmers do understand the damage done by cattle though. Some farmers and pastoralists are establishing “exclosures” or areas from which all livestock are permanently excluded. In these areas, the biodiversity of the cryptogamic layer can regenerate and thrive, providing sources of “inoculation” for other areas, as the tiny animals, plants, seeds and spores distribute themselves outwards.

But not the ones who are sending their cattle to our national park.

Most of the destruction from the first “trial” we’ve seen on Youtube videos won’t include the destruction of the cryptogam layer…because you can’t see it! Indeed, the only way to learn about the cryptogamic layer is to spend a little time getting acquainted with this exciting, hidden world just beneath the soil’s surface.

Try to find an undisturbed piece of ground which is reasonably moist (avoid dog parks — bush option recommended). Lying face down, nose almost in the dirt (the interesting smells are a bonus!) and using a magnifying glass, you will see this tiny, hidden kingdom come to life. When I tried this recently, my patience was rewarded with remarkable sights:   bright & shiny-winged insects scurrying amongst the tiny fungi and grass roots; little red mites clambering over mosses and lichens; and all sorts of strange and beautifully-coloured particles made up of nature’s debris – the leaf litter, roots and decomposing insects – or food for the tenants of this Lilliputian kingdom.

What is even more exciting to think about, is what we can’t see: the microscopic world which, too, has its own living organisms and tiny, complex ecosystem.

Like Alice in Wonderland, we can quickly learn to enjoy and respect this diminutive world “through the looking glass” – and help protect the biodiversity – not to mention the Alpine National Park.