A hint of corruption lingers over Pru Goward’s NSW Planning Department as it meets with Rio Tinto to discuss environmental objections to the controversial Warkworth coal mine continuation, writes Lachlan Barker.

IN THE HUNTER VALLEY of NSW a battle for survival is going on.

On one side is Coal & Allied, a subsidiary of Rio Tinto; on the other, the residents of Bulga — a tiny village in the shadow of the Mount Thorley and Warkworth coal mines.

The NSW planning minister Pru Goward is supposed to be impartial adjudicator on Rio’s plans to extend the mine, however, as you are about to see, Goward and the NSW government are desperate for this mine to go ahead.

The current state of play is that Rio Tinto have applied to extend the size of the Warkworth mine — the Warkworth Continuation project, as it’s called.

This will bring the mine closer to the tiny village of Bulga.

Already life in Bulga is less than optimal, with the noise, lights at night, and air quality heavily impacted. Local resident John Krey, vice president of the Bulga Milbrodale Progress Association estimates that 100 million litres of diesel are burned on the mine each year. (I did ask Rio Tinto to confirm or deny this estimate, but got no response.)

Clearly, all of those issues will be even more invasive if the mine moves closer to the village. 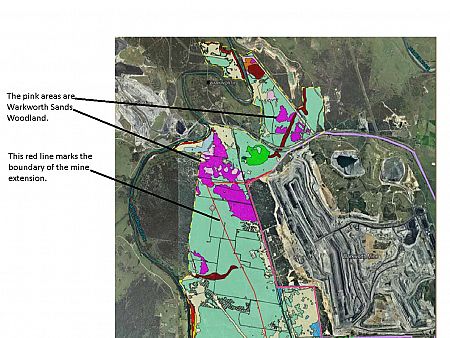 There is also a major ecological issue here as well.

Close by Bulga and the mines is a unique eco-system known as Warkworth Sands Woodland (WSW). The NSW Department of Environment and Heritage classifies it as an Endangered Ecological Community (EEC) and estimates that there is approx 800 hectares of this type of forest left on Earth — all of it in the Hunter Valley, in the very shadow of the mine.

To do the expansion, Rio Tinto wish to destroy approx 72 hectares ‒ or 9% of what’s left on Earth ‒ of the Warkworth Sands Woodland.

The company is planning a major offset of this woodland, and claim they are going to create more hectares of it in the end, but we’ve all seen how successful offsetting has been so far as a policy.

What’s more, the current Continuation plans to destroy some hectares of land that were the offset for an expansion in 2003, thus giving no confidence that even if this 2014 offset is created and is valid, that it won’t then be subsumed in some future expansion.

Furthermore, there is an ongoing controversy about Rio Tinto’s meetings with the Department of Planning and Environment. 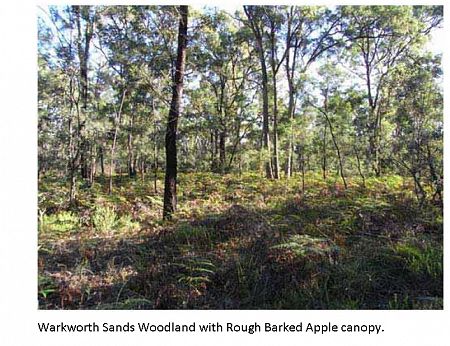 John Krey and the opponents of the mine claim that there was a ‘working group’ formed within the Department of Planning and Environment, specifically to move this Rio Tinto application along — and quickly.

Greens’ MP David Shoebridge is in no doubt about this, telling me during interview that this interaction between Rio and Planning was an

“… utter debasement of the planning process… [and] regulatory capture of the worst kind.”

The financials of the mine expansion also provides a source of astonishment.

When I first began looking into this Warkworth mine, I got the impression that Rio Tinto were pushing so hard because they were planning to make a lot of money out of the Warkworth expansion.

However, to my considerable surprise and providing even greater frustration for the residents of Bulga, I learned that far from making money, Rio will be actually losing it.

On the major projects section of the Planning and Environment Department’s website is all the data about the Warkworth Continuation .

The Australia Institute (TAI) have done a thorough examination of the economics of this mine expansion and their research is summarised in the following table: 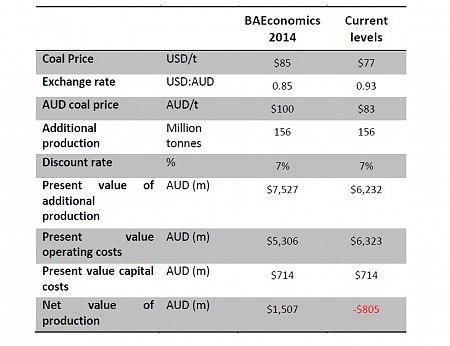 TAI figures are in the right hand column and, when they did them, the coal price was US$77 a tonne and the exchange rate was 0.93, thus leading to a price per tonne of AUD$83.

I checked with Roderick Campbell, a TAI economist, who was part of the team which did the figures in the table above, and asked:

‘Why are Rio pushing so hard for this, when the mine is not going to be profitable?’

His reply was complex and well above my level of economic understanding, but essentially Rod told me that Rio wish to sell this mine, probably to Glencore and without the approval for the mine expansion there is no chance of that happening.

‘Why on Earth would Glencore want to buy it, though, if it’s so unprofitable?’

Rod explained that Glencore have more projects in the Hunter Valley than Rio and so may be able to consolidate these assets, thereby extracting coal at Warkworth for lower costs per tonne, producing a better financial result. But mostly, he said, it a cynical game of financial chess between the coal companies, with assets bought and sold at different times of the year, to make this or that bottom line look better at this or that time of year.

As for the meetings between Rio Tinto and the Planning and Environment department, is this corruption?

Well this screen grab is from the NSW Independent Commission Against Corruption (ICAC) website, What is corrupt conduct? page and indicates that it may be: 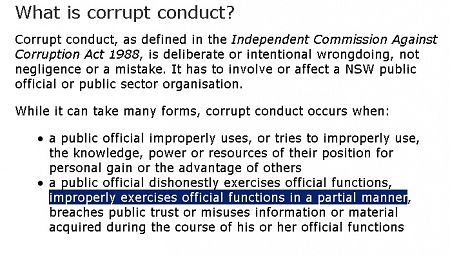 These meetings seem to bring that word ‘partial’ into play.

The Planning and Environment Department responded to this story on their website, saying:

‘DP&E staff join other relevant NSW Government agencies to meet with the proponents of every major mining proposal to answer questions about government policy and clarify expectations about the assessment of key environmental issues.’

However, it seems to me that that to demonstrate impartiality, one would think it reasonable for the Planning and Environment Department to also offer a similar meeting to the opponents of the mine, such as the Bulga Milbrodale Progress Association, to keep them likewise informed.

So I contacted the media unit at the Department of Planning and Environment and asked:

‘In the current case of Mt Thorley-Warkworth, was a similar meeting offered to the Bulga Milbrodale Progress Association, an opponent of the expansion?’

So I checked with John Krey, of the Bulga Milbrodale Progress Association and asked:

‘Just to confirm, was the Bulga Milbrodale Progress Association, or any other opponent of the Warkworth Continuation, ever offered a pre-submission meeting with the Planning Department as Rio-Tinto was?’

‘No, it was all kept between Rio Tinto and the Government agencies.’

Then I tried to find out from Rio Tinto, the Planning and Environment Department and planning minister, Pru Goward, how many of these meetings occurred.

My reasoning is that if they held one meeting, then that’s more or less fine, and the department could justifiably claim it was a simple information session. At the meeting the department would have told Rio, they need to address this regulation, that legislation and so forth. If, however, there was more than one meeting, that seems to support the Greens’ contention that the department and Rio were workshopping this and brings that word ‘partial’ into play.

But, as ever, neither Rio, the Planning and Environment department, nor Pru Goward, would answer my question about how many meetings occurred.

However, David Shoebridge was up for the fight. I had also asked him if he knew how many meetings had occurred, he didn’t know, but was prepared to find out.

He asked what I wished to know, so I sent through my question:

‘The relevant question seems to me to be “how many meetings did the Planning and Environment Department of NSW have with Coal and Allied/Rio Tinto about the Warkworth Continuation?”’

‘Lachlan, we will draft this and put it on notice when Parliament returns on the 13 October.’

If David Shoebridge can get some answers, we, the citizens of NSW, may regain some badly eroded confidence in the environmental approval process.

We may even see the Baird government say ‘No’ to a coal mine.

Stranger things have happened, but don’t hold your breath.