2014 a record-breaking year for renewables — except Australia of course

The latest REPN report shows renewable energy is now indisputably the world's new economic powerhouse. Dr Anthony M Horton warns Abbott that Australia will be left behind in the wake.

The latest report from the Renewable Energy Policy Network (REPN) released 18 June 2015 has shown that 2014 was a record breaking year for renewable energy around the globe (but not in Australia).

Renewable energy is now regarded as the new economic powerhouse around the world and is attracting investment and providing employment. It is now increasingly likely that those countries that embrace this renewable “wave” are going to leave those that don’t in their wake. 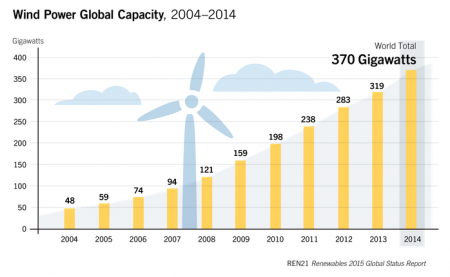 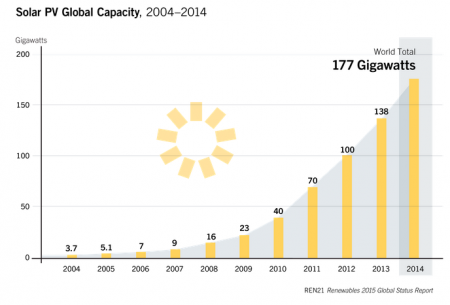 Globally, there is increasing awareness of the critical part that renewable energy will play in addressing climate change, creating new economic opportunities and providing energy to the billions of people that are living without modern energy services. Renewables also have a role in adaptation as they help to improve the resilience of energy supply systems and maintain the supply under changing conditions that accompanies climate change.

The REPN Report nominated a number of factors behind the significant growth, including policies that support renewables and their increasing cost competitiveness.

In a number of countries, renewables can compete with conventional sources on cost, however overall growth has been tempered by fossil fuel and nuclear power subsidies particularly in developing countries.

While China led the world in renewable capacity in 2014, Brazil, India and South Africa significantly increased the capacity from their respective regions. A number of developing countries across Asia, Africa and Latin America became important manufacturers and installers of renewable technologies.

Renewables represented approximately 60 per cent of net additions to global power capacity last year, with wind, solar PV and hydro-power being the dominant technologies. By the end of December 2014, renewables constituted approximately 28 per cent of the world’s generating capacity. There has been significant growth in “prosumers" – those who produce their own electricity – in Australia and throughout Europe, Japan and North America.

District heating and cooling systems continued to grow in popularity, particularly in Europe. District systems can absorb heat when supply exceeds demand and hybrid systems can serve different applications in innovative ways. Despite the continued integration of renewables into district systems and the vast potential of renewables to meet heating and cooling needs, growth has been hampered by factors such as a lack of policy support.

Global investment in renewables outstripped fossil fuel investments for the fifth year running in terms of additional capacity in 2014. There were booms in China and Japan and record investments in offshore wind projects in Europe. Investments in developing countries increased 36 per cent from 2013 to US$131 billion, and came closest to matching investment in developed countries (US$138 billion).

In dollar terms the largest increase was in China which accounted for approximately two thirds of renewable energy investments from developing countries, while in percentage terms, the largest increases were in The Netherlands and Brazil. Investments spread to new markets in 2014 with Chile, Indonesia, Kenya, Mexico, South Africa and Turkey all investing more than $US1 billion.

The REPN report also recognised the synergy between energy efficiency and renewable energy sources in terms of technical and policy contexts and across a range of sectors from buildings to industry and transport.

In 2014, targets were present at all levels of Government and a number of countries introduced new policies or introduced amendments.

Labelling programs and standards to improve the energy efficiency of appliances and other products that consume electricity were in place in 81 nations by the end of 2014.

Standards for electric motors used in industrial applications were in place in 44 nations and vehicle fuel economy standards covered 70 per cent of the world’s light duty vehicle market.

John Graham's original cartoons are available for sale from the IA store.

For more news on how the Abbott government is forfeiting our share of the future low carbon economy, subscribe to IA for just $5.