This week, John Wren discusses the latest in the ongoing NBN drama and also the reasons behind the Menindee fish kill.

ANOTHER FASCINATING WEEK in Australian politics. It’s all going downhill very quickly for the Government.

To quote a line from the latest episode of Madam Secretary:

“The government’s popularity is not just falling, it’s crashing back to Earth and breaking up on re-entry.”

We started with two former PMs, Rudd and Turnbull, publicly slugging it out, defending their respective legacies on the National Broadband Network. Rudd has been calling for a Royal Commission into Rupert Murdoch’s influence on the media and politics, and cites Murdoch as the reason Turnbull (as Communication Minister under Abbott) retreated from Rudd’s FTTP model. I’m inclined to believe Kevin Rudd.

Rudd’s NBN model, whilst not perfect, was visionary. Kevin saw Australia’s NBN future-proofed with a vast metropolitan fibre network delivering high-speed data directly into Australian homes, with satellite services in remote locations. It was ambitious and expensive, but was also the infrastructure Australia needs this century. High-speed broadband has the ability to impact every part of our lives, from providing remote healthcare, communications and business services as well as streaming video, of course.

Abbott and Turnbull are the 2 politicians most responsible for the NBN mess.

I wrote this NBN article late last year. Might find it interesting https://t.co/PPJAmQh0yr

Turnbull, in turn, denied he acted for Murdoch, degrading Rudd’s model with a cheaper multi-technology mix (MTM) approach. I‘ll go further than the word “degrading” and say it was deliberate vandalism wreaked upon the NBN to offer Murdoch’s Foxtel some protection from streaming media services.

The reality is Australia has been effectively left without a national broadband network. This is Turnbull’s shameful legacy. The NBN we have in most cases does not even deliver broadband. It is not fit for purpose. In my own home, I use a Telstra HFC cable and get excellent speed (see below). I am told when I am forced onto the NBN I will be fortunate to get half this speed and I will be charged more for it. I have friends in Auckland who get ten times my speed on the NZ version of the NBN (FTTP) for the same price I pay for 110 Mbps. It is no wonder NZ’s I.T. sector is doing so well. 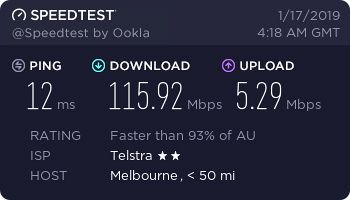 On Monday, someone in the Liberals leaked internal polling that showed them losing all but two seats in Victoria in the next election. They are definitely on the nose in Victoria, but nobody thought it was this bad. If this dissatisfaction was to be replicated across the nation, the Libs will be wiped out. But what is the motivation behind the leak?

I see it as two possibilities: Someone in the RWNJ faction of the party wanting to further destabilise Morrison as leader — I’m thinking Dutton or one of his offsiders to soften up the party for yet another leadership spill, or what is more likely, a final desperate act from a party that knows it’s lost the election and is going to try to scare voters away from Labor, using the spectre of a one-party state, if they don’t vote for the LNP. Either way, they’re stuffed. If Morrison had the gumption, he’d call an election and end the farce.

And, of course, we have the massive fish kill at Menindee Lakes, caused by an irrigator who has taken far more water from the system than required. Numerous articles and commentary point to overt corruption and cronyism as the cause. The Nationals’ Tweedle-dumb and Tweedle-dumber, Joyce and Littleproud, are the two inept ministers who have allowed this to happen on their watch. Both are running for cover. Littleproud called an emergency meeting, flicked $5M at the problem then jumped on a plane to Germany. He shouldn’t hurry back. Joyce is in witness protection. The PR firm’s crisis-management team has obviously told them to blame the drought.

It’s clear Barnaby Joyce is still calling the shots in the National Party and like Turnbull, a weak Scott Morrison is letting him get away with it. Another reason the secret Coalition Agreement should be released #menindee #auspol https://t.co/vTFppCxT6r

The reality is there is a plan to manage water flows in the Murray Darling Basin to ensure the river stays as healthy as possible and that irrigators are also largely satisfied. The plan obviously needs to be constantly reviewed to take into account actual and forecast rainfall and tweaked, relaxed and tightened as needs dictate. This has clearly not happened. Irrigators drained the water from the Menindee Lakes leading to a toxic algae bloom and the massive fish kill. The dead fish may stink, but the stench of Coalition Government corruption at both the NSW state and federal levels is even worse. It deserves a Royal Commission.

To try to run a distraction from the fish kill, the ersatz PM Scott Morrison ramped up the annual Australia Day rhetoric, promising to make councils hold citizenship ceremonies on Australia Day and enforcing dress codes that oddly prohibit the Australian national dress of board shorts and thongs. He studiously avoided all mention of the Menindee fish kill until he departed on Wednesday for whistle-stop visits to Vanuatu and Fiji. Of course, all the usual Murdoch media culprits jumped on the distraction bandwagon. The IPA released poll results showing the majority of Australians want the day to stay as it is. Being the IPA, a body founded and funded by Murdoch, the poll results are, at best, highly suspect and, at worst, a complete fabrication. And, of course, it worked. It took the fish kill off the front page for a few days at least. This is the shameful media environment we are afflicted with.

Democracy lives or dies by a fair and unbiased media. With Murdoch and his Channel 7 and Channel 9 allies, our democracy is under threat. Fortunately, social media and the growing independent media (including this publication) are helping to right the imbalance. Please support your independent media. It is the last bastion of democracy. Read it, subscribe, pay for it.

It is worth highlighting the growth of independent media in Australia. With elections looming, trust in politicians at an all-time low and the MSM focused on headlines instead of substance, voters are seeking answers elsewhere  https://t.co/w1zwVkOYEj