HOME AFFAIRS Minister Peter Dutton is a callous individual, even by Australian standards, and he has already pronounced himself judge, jury and executioner in the case of the two ABC reporters at the centre of recent federal police raids on their Sydney office.

Speaking to the media last week, Mr Dutton said he wants to pursue this matter right through the court and that he’d welcome journalists going to gaol for the "crime" of writing about things the Government would rather we didn’t know:

"These are laws that go back decades in western democracies like ours where, if you've got top secret documents and they've been leaked, it is an offence under the law and police have an obligation to investigate a matter referred to them … and they'll do that."

Dutton has made it clear there is a commitment from at least some in the Government to make an example of reporters Annika Smethurst, Dan Oakes and Sam Clark. Now we know that the AFP was also seeking fingerprints from Oakes and Clark in an active criminal investigation.

Dutton is Home Affairs Minister and has responsibility for the AFP — and it seems he might be at odds with the Attorney-General Christian Porter.

In previous public comments, Porter has said that no journalists were under threat of legal sanction and that the AFP raids were aimed squarely at whistleblowers.

That assurance, given a month ago, now seems hollow. Morrison has refused to support his Attorney General and Porter has since gone back on his own words. Perhaps, like many of his colleagues, Peter Dutton’s menacing countenance and reputation as a bully has Porter running scared.

'Limited information available to me': Attorney-General walks away from AFP claims
Christian Porter has backed away from earlier assurances journalists aren't being targeted by police, as News Corp hits back at Peter Duttonhttps://t.co/WzSTK9GZQj

None of this gives me any confidence that a Parliamentary inquiry into the “chilling effect” of national security laws on public interest journalism will do anything but rubber stamp Dutton’s aggressive behaviour towards reporters.

The inquiry will be administered by the Parliamentary Joint Committee on Intelligence and Security. The PJCIS sounds ominous and its inquiry also has a suitably long and dark-sounding name:

'Inquiry into the impact of the exercise of law enforcement and intelligence powers on the freedom of the press'.

There are several reasons to think that the result of this inquiry will be less press freedom, not more. For a start, the Terms of Reference seem skewed in favour of the at least the status quo. 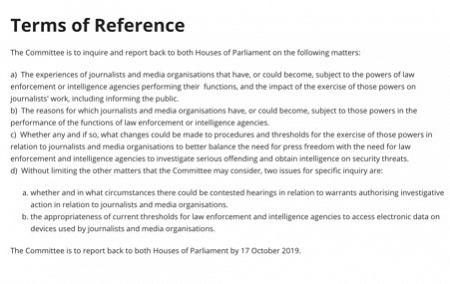 I believe this inquiry will either give the government what it wants – unfettered powers to muzzle reporting it doesn’t like – or it will be ignored like all the other recent inquiries into media freedom. We’ve been here before, so excuse me if I’m a tad cynical about this latest iteration of a decidedly stale vaudeville song-and-dance routine.

Labor will move to establish a parliamentary inquiry into press freedom, accusing the government of “doing nothing” in the aftermath of Australian federal police raids on two media organisations https://t.co/A9JF5mNEwP #auspol #ausmedia

The sorry history of government inquiries into press freedom

In less than a decade, there have been at least four inquiries into the Australian news media by various parliamentary committees or bodies appointed by Parliament to conduct an "independent" inquiry.

From Finkelstein to forgotten

In 2011, the Finkelstein Inquiry was the first to look at questions of press freedom. Eminent legal scholar Raymond Finkelstein AO QC was appointed by the Gillard Government to examine the ‘effectiveness of current codes of practice’, the ‘impact of technological change on the news business’, the ‘effectiveness’ of the Australian Press Council, and ‘related issues’ that might impact ‘the public interest’.

Chapter Two of the report was ‘The democratic indispensability of a free press’, so the issues were well-canvassed at the time. Finkelstein’s key recommendation was the establishment of a "News Media Council" and it was this measure news bosses were most incensed about.

The idea of a "News Media Council" was hardly revolutionary; it was to be voluntary and its main role would be to adjudicate complaints, replicating the role of the Australian Press Council (APC) and the Australian Commercial Media Authority (ACMA).

As I wrote in IA at the time,

'... there was nothing in Finkelstein to either recommend, or condemn it. Overall it was an expensive non-event.'

It’s now almost impossible to find any detailed references to the 11,000 submissions made to the Finkelstein Review. All references to it on the Government’s own websites have been obliterated. The archival link to the website is now a dead end. In fact, my blog is about the only live source on the web where you can still find contemporary discussion of the Finkelstein inquiry.

The Finkelstein Report has gone down the memory hole so that history can be re-imagined and the narrative rewritten to suit contemporary political needs.

As we shall see, a similar fate has struck several of the subsequent inquiries into the news media.

Murdoch & others succeeded in sinking the Finkelstein Media Review 5yrs ago. Given Murdoch’s impact on future of our democracy it's time to revisit it. Anyone who thinks the problem will go away once Lachlan replaces Rupert is deluding themselves #auspol https://t.co/egNjLz9S9d

Next cab-off-the-rank was the Convergence Review which occurred very close on the heels of Finkelstein. The most telling recommendation of this review was to reject Finkelstein’s suggestion for a "News Media Council". The link to this inquiry and report also leads to the memory hole. You can read about it on Ethical Martini, but hardly anywhere else.

Remember, Finkelstein and the Convergence Review were held and subsequently ignored by the Gillard and Rudd Labor Governments. But the COALition has also conducted its share of inquiries. As you have probably guessed by now, none of them have had any political traction, and they’ve been hamstrung, sidelined, ignored and forgotten.

The Senate Select Committee on Public Interest Journalism came into existence on 10 May 2017 and ceased operations on 5 February 2018, when its Report was handed to the Senate.

The committee’s Terms of Reference were, like Finkelstein’s, broad and with a remit to look widely at issues framing the idea of press freedom. 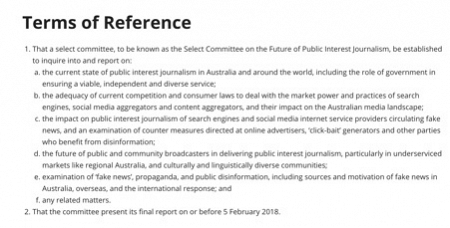 Senator Sam Dastyari was on this committee, but now he’s been erased from history too.

The Committee’s recommendations were duly "noted" by the Government, but no substantial changes were made. The only actioned outcome was to establish a money-laundering mechanism to give funds to regional mid-market Murdoch-owned newspapers to prop them up and stop them from closing down. Small outfits like Independent Australia were deliberately excluded from the eligibility criteria.

The Morrison Government has done nothing to shore up press freedom in Australia over the past six years and, in fact, its actions have actively undermined it in several ways.

Not only are we seeing an unfolding narrative, in which the harassment and potential gaoling of journalists is being legitimised by senior Government ministers, but we are now stuck with a Parliamentary inquiry by the very same bipartisan committee responsible for laws that tie journalists in knots, with respect to surveillance of their data and electronic devices.

ABC & News Corp are arguing that AFP warrants infringe “implied freedom of political communication” protected by the Aust Constitution. This challenge sets national security & press freedom against one another & could lead to groundbreaking developments... https://t.co/Znnm96T51B

Why do governments hate an active and independent news media?

The Government and its agencies don’t want us to have access to information about the machinery of government, decision-making and policy failures because, frankly, it doesn’t make them look good. Letting the public in on government’s dirty little secrets exposes the underhanded, unethical and potentially illegal actions they take, and the wrong decisions they make in our names.

This cloud of secrecy is deliberate and it is very hard to penetrate.

Colour me cynical, but my experience tells me that any new laws that our Parliament might pass to give us some form of regulated "press freedom" are more likely to reflect the restrictive culture of FOI law and entrenching the right of government secrecy than to give us any form of genuine reform and a guaranteed free press.