Prime Minister Julia Gillard and the gang of seven media bosses have buried their hatchets, reaching a compromise on media regulation — it’s to be business as usual, behind the starched-up fig leaf of tougher self-regulation, writes Associate Professor Martin Hirst. 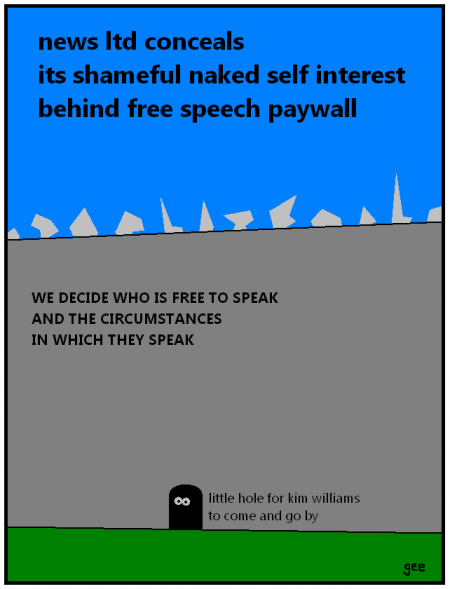 This must be the oxymoron of the year and it would rate well in best cliché competitions, too.

We should remind ourselves that tougher self-regulation is exactly what Ray Finkelstein wanted from the Independent Media Inquiry. He was unable to put it in his recommendations because, at that time, the gang of seven was against it. A number of them and their deputies marched into the inquiry and gruffly demanded that it do nothing.

You might not remember this because it has conveniently fallen down the memory hole.


Exactly who is attacking free speech?

In fact, it really is as if nothing’s happened. We’ve gone up the ladder and been taken back down in a Python-squeeze of over-excited adolescent group hysteria about a non-existent attack on free speech.

The media inquiry report does not make wholesale recommendations for the elimination of freedom of the press or free speech. It recognises the ethico-legal paradox at the core of the job it was asked to do and it attempts to find a balance.


'This is the situation this Inquiry must address: how to accommodate the increasing and legitimate demand for press accountability, but to do so in a way that does not increase state power or inhibit the vigorous democratic role the press should play or undermine the key rationales for free speech and a free press.'

Ray Finkelstein acknowledged this difficult balancing act and throughout the public hearings he made clear, time after time, his preference for a regime of self-regulation that would meet the demands for accountability, but ensure that the underlying market mechanisms were not disturbed.

Finkelstein was far from the anti-free speech monster portrayed by the gang of seven. It is fair to say that the media inquiry itself suffered from bad press.

Claims that that the review’s recommendations amounted to fascism or Stalinism are no more than far-fetched scare tactics and are perhaps evidence that the news media should be more closely regulated and held to standards of accountability and public interest.

Since the release of the Finkelstein report in February, there has been an ongoing campaign against its authors and its recommendations. This has been general across most media, but there can be no doubt it is led and coordinated by senior executives at News Limited.

The Australian in particular has been relentless in pursuit of its own corporate interests – no change to the status quo of soft self-regulation – and vehement in its opposition to any further means of accountability. 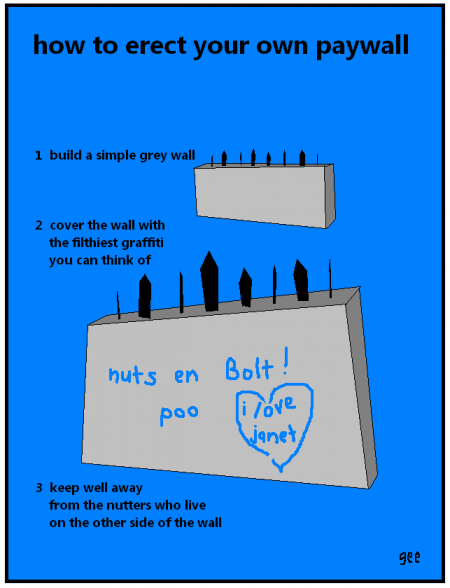 The Australian has published at least 12 editorials alongside innumerable opinion pieces and letters to the editor lambasting the media inquiry and anyone who might dare to suggest a bit of media regulation could actually be a good thing. I read The Australian every day and I can only recall one article, by the ABC’s Tom Morton, that defended the idea of regulation or more accountability.

This comment is typical of the editorial line taken in The Australian. It describes the proposed media regulator as:

'...a government-funded star chamber to pass judgement on newspapers and broadcasters… Journalists refusing to sacrifice their independence by bowing to its edicts would risk fines or imprisonment.'

I have read the Finkelstein report and I cannot find any reference to a recommendation that journalists be fined or sent to prison under proposed regulations. But that myth has been around for a while. Mark Day had it in the first par of a front-page story about the Convergence Review on 26 April, before its report was even available.

In fact, the media inquiry report heavily favours what it calls “enforced self-regulation”. On page 287, the report gives some detail about what this might mean:


'11.33 Enforced self-regulation has the following benefits:

What Finkelstein actually recommended was that the government help the news industry put in place a better system of self-regulation. This is also what is proposed in the later and more influential Convergence Review report.

No-one is recommending a government-controlled or appointed body to regulate the news media.


No fines or penalties or jailing of journalists

The Finkelstein report explicitly rejects the imposition of fines or other financial penalties at paragraph 11.76 (p.298). There is no provision calling for the jailing of journalists, but in an effort to give the proposed co-regulatory body some “teeth”, Finkelstein did recommend remedies at law for refusal to comply with a Media Council determination. Here’s what the report says about this at paragraph 11.77 (p.298)


'There should be a legal requirement that if a regulated media outlet refuses to comply with a News Media Council determination the News Media Council or the complainant should have the right to apply to a court of competent jurisdiction for an order compelling compliance. Any failure to comply with the court order should be a contempt of court and punishable in the usual way.'

Now you’ve seen this, it is possible to draw the conclusion that The Australian has not been totally honest in its depiction of the media inquiry report. The idea that journalists would be fined or imprisoned for a breach of some outlandish code of practice is pure rubbish. The report is quite clear; it is media outlets and their managers who would be liable for any refusal to comply and that this refusal would be dealt with under the rule of law.

The words “jail”, “prison” and “gaol” do not even appear in the report and the word “imprisonment” only occurs in two quoted sections of other documents; one of them is the News Limited Code of Conduct (see p.432). However, if you read The Australian, it would be easy to think that Ray Finkelstein urged the power to fine or jail reporters be given to the proposed Media Council.

News Limited CEO Kim Williams made this claim in a speech to the Adelaide Press Club on July 13. The speech was reproduced in the Weekend Australian under the misleading headline “Fining and jailing of journalists a threat in over-regulation”. Here’s what Williams said in his speech:


"Under Finkelstein’s recommendation, journalists can be fined and even jailed, with no appeal rights … The super-regulator does not have to publish reasons for its decisions."

Well, this second part is misleading too. The report clearly says that any regulatory body would be expected to publish decisions, but that it could choose not to do so for legitimate privacy or other reasons.

However, don’t expect to see any kind of correction any time soon. Providing misleading implications about the media inquiry is stock-in-trade for Murdoch’s senior opinionators at The Australian. Worse still, it is actually OK to go back and rewrite any inconvenient facts out of the record.

A column by Janet Albrechtsen published on 11 July this year, with the headline “Silencing critics in seven illiberal steps”, said this:


'Largely based on opinion surveys, [the media inquiry] recommended a new body, the News Media Council, to license the press and censor news reporting and political commentary. Under its recommendations, there would be no appeal from council findings. And those who disobey the council findings would face fines or imprisonment.'

However, the online version of the article has been changed. On 16 July, The Australian published a small correction on page 2 under the headline “News Media Council”. The correction referred to the Albrechtsen article and noted:


“In fact the [Finkelstein] report explicitly recommends against licensing of the press.”

That’s right, it does. Here’s the clause in question:


'11.26 Licensing the press should also be rejected, because in a democratic society the government should not be involved in controlling who should publish news.' (p.285)

We don’t know the circumstances around the correction, but never mind, the Albrechtsen story no longer carries this mistake — it was edited out. The online version of Albrechtsen’s column has been “amended” to this:


'Largely based on opinion surveys, it recommended a new body, the News Media Council. The report explicitly recommends against licensing of the press both in the body of the text and in the executive summary. Nonetheless, the model set out in Chapter 11 of the Report effectively advocates a licensing system of the media by recommending a government-funded, super-regulator with the power to make non-appelable [sic] findings against news and commentary. And those who disobey the council findings would face fines or imprisonment.' 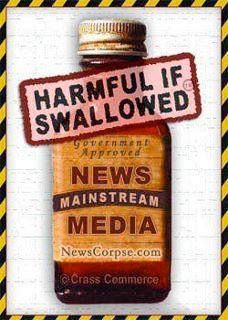 Nonetheless? Well, not quite. It is not a licensing system and the report quite clearly says that the regulatory body should set, maintain and supervise the standards itself — not the government. The issue of appeal to the Administrative Appeals Tribunal is also a red herring, spun to sound sinister by The Australian.

The simple explanation is that complaints resolution should be a speedier process than it is now (sometimes taking months). Instead the report suggests review by the legal system (“judicial supervision”), which is exactly the case now (although the Press Council requires complainants to sign away that right before it will hear their complaint).

So, what are we to make of the stories this week that the Prime Minister is seeking to appease the gang of seven and backdown on media regulation?

It was always going to happen. Stephen Conroy was only able to take a penknife to a gun-fight at the High Noon saloon. The rest of the Labor cabinet is too spooked to back him up.

The gang of seven has the look and feel of a lynch mob; you don’t pick fights with blokes who buy ink by the tanker-load.

(Assoc Prof Martin Hirst is a financial member of the Media, Entertainment & Arts Alliance. Contrary to several incorrect media reports in The Australian at the time, Martin was the FIRST person called to give evidence before the Independent Media Inquiry.You can read more by Martin Hirst at his blog Ethical Martini or by following him on Twitter @ethicalmartini. This article was originally published at The Conversation. Read the original article.)
MEDIA free speech freedom of speech Janet Albrechtsen Kim Williams Mark Day Martin Hirst media inquiry media regulation News Corp The Australian