Despite any specious claims to the contrary, says David Horton, the ABC has in recent years clearly moved to the Right of the political spectrum. 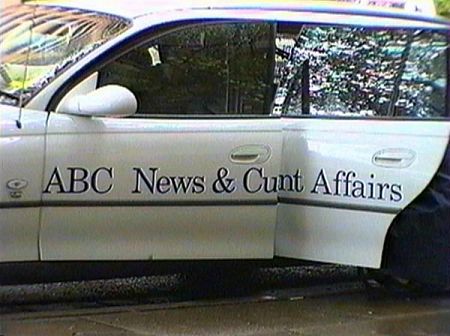 EVERY NOW AND THEN, often enough that the phrase is probably encoded as a single keystroke on ABC keyboards, someone from the Australian Broadcasting Corporation will say:


"We get allegations of bias from both the Left and the Right so we must be very well-balanced".

This specious, self-serving, narrative has been increasing in frequency over the last three years in parallel with the increasing observations, by those on the Left, of the undeniable lurch to the Right that the ABC has made.

Sometimes, this narrative might be accompanied by the observation that both a Labor Prime Minister (Keating) and a Liberal (conservative) one (Howard) in recent years have complained about the ABC. And, indeed, this is a valid observation in the 1990s (and previously) and tells you something important about what was going on. In both cases the objection was that the ABC was a public broadcaster was, without fear or favour, willing to speak truth to power. And since prime ministers of both parties rely totally on fear and favours to govern, and have absolutely no interest in their power being challenged, both hated the scrutiny by the ABC. The commercial networks of course, also greatly interested in favours and power, had absolutely no interest in rocking a conservative government boat too much.

And what sin did ABC journalists and presenters commit in those far-off, almost mythical times? Why, they asked questions of prime ministers and government ministers, of whichever party was in power. Asked questions! And sometimes, and my younger readers will hardly credit this, they would ask a follow-up question when the minister evaded a question the first time! Sometimes even repeat a question, quote a fact or two. If there is anything governments hate, it is having their evasions and secrets and fact-free actions exposed to all the world like an Emperor's new clothes.

So, that is the first point. In my observations over many years the only bias in ABC programming was daring to ask questions that governments didn't want asked, and being so presumptuous as to not accept answers governments wanted accepted. It could be suggested that conservative governments, with their born-to-rule mentality, resent questioning even more than left-wing governments do, and are more likely to see the asking of a question itself as evidence of bias — but neither kind of government is fond of scrutiny.

And so to the second point. The actual actions by Keating and Howard in relation to their anger were quite different. Keating kept on muttering away about how outrageous it all was, or would front a journalist at a function (or in a late night phone call) and set them straight about the error of their ways. But he did this to commercial and ABC journalists alike. No fear or favour there. And no consequences either.

No such ineffective inaction for Howard, who knew the importance of stopping the questioning. "We will decide what questions are asked and the circumstances in which they are answered", I guess. No mucking around. Appoint members of the ABC Board who were not merely right-wing but culture warriors certain to be sympathetic to Howard's agenda — not just one or two, but the whole Board. Then appoint a Chairman who, in addition to that ideological qualification, was also a close personal friend of John Howard's. Appoint Managing Directors who had the right stuff and then they in turn would appoint senior managers who were politically correct for the new conservative times, and they in turn would appoint reporters and presenters with the right attitudes (often, I understand, from commercial media networks in all three cases). In the meantime, shift one presenter, a particularly persistent question asker sideways, and have the Board ensure that there were no mistakes.

Pretty soon the thing runs itself, although if evidence of recalcitrance emerges or might emerge, issue instructions, and, if that fails, issue reprimands of staff and apologies to the offended conservatives.

As well as getting the right personnel in place, start playing with the way the organisation does news and current affairs, long its great strength and glory. Add new current affairs programs designed to be venues on which opinionators can spout forth in prime time. They have to be opinionators, not the "experts" who once appeared on the ABC, because reality has a well-known left-wing bias. And they will be almost all from the far right of the political belief spectrum - preferably the worst former conservative ministers and political staffers and the members of far right “think tanks” (see my earlier post here). You justify this by saying you have to get these people on to "balance" the ABC. But since these programs didn't exist before, the presence of so many right-wing opinionators completely unbalances the ABC, since the rest of the organisation is largely uninvolved in anything to do with politics and current affairs. This torrent of right-wing ideology pouring out of talking heads day after day, all over radio and TV outlets and the new online venue, unchallenged by any fact-checking (because fact-checking has been successfully framed as "bias"), has in itself shifted the ABC a long way to the Right. But wait, there's more.

ABC News was always the jewel in the crown, the most trusted source of independent objective news in the country. Can't have that. With a Labor government elected in 2007, it wasn't enough just to have conservatism rampant in current affairs, the news itself needed to be massaged so that the public would both get the "right" news in the right form, but know the right way to think about it. So, almost unnoticed, the style of ABC News began to change. Instead of just reporting, factually with some information about content, say a Cabinet reshuffle, a policy change, a Prime Ministerial speech, no news bulletin could proceed without a cross to "our political reporter in Canberra" who would massage the news with his or her own ideological prejudices. It would turn out, inevitably, that the reshuffle was a sign of chaos in the government, that the policy change was a backflip, that the speech was shrill or strained. All said with the kind of sorrowful air that precedes a beating from a Thwackum or a Squeers. I can't remember a single major government action in the last three years presented as simple news without it being massaged to be a negative for the government by a clearly right-wing reporter.

Once upon a time, this kind of "news interpretation" was left to radio shock jocks or commercial TV breakfast shows and would have been thought outrageous on an ABC news bulletin. Now, it is taken for granted as the way one "does news".

As is the more subtle manipulations involved in the choice of film clip or photo to illustrate a piece, the headlines and captions used, the terminology used (eg "carbon tax") as derived from the conservative framing, the way the Prime Minister is referred to, the choice of which bits of an event to broadcast, the constant promotion of Opposition stunts, the carefully framed pictures of crowds and their reactions. There is the ubiquitous, apparently obligatory, use of the phrase "Tony Abbott says" or "The Opposition said today" to begin items about something the government has done or announced, with or without a later brief comment from the minister concerned. There is even a constant use of Opposition members to comment on some internal Labor Party matter ‒ a promotion, a retirement, a policy debate ‒ which they could not possibly know anything about (the reverse process doesn't happen). And there is the complete failure of ABC journalists to think or act in any independent manner at all. They no longer, it seems, do any research or work on their own questions — they simply ask a question that has been framed by the Opposition. Or, even more insidiously — as it has been framed by Rupert Murdoch's News Ltd publications. Members of whom also regularly appear on the ABC to offer spin and interpretations, with any sense that there should be a line drawn between the ABC and its rivals totally gone.

Which brings us back to the proposition we began with about "criticism from left and right = Balance QED".

In spite of all that I have outlined above, the ABC still gets hammered by shock jock columnists and politicians of the stripe of Eric Abetz. In their eyes, though the ABC can never be far right enough. If the totality of ABC programming consisted of someone from a Right Wing think tank reading press releases from Menzies House all day, they would complain that the sound wasn't turned up loud enough, or the set was the wrong shade of blue. They get outraged when the ABC dares to mention climate change for example (the stacked Board having insisted that the ABC run, in prime time, the appalling "Great Global Warming Swindle"), or might be perceived as doing something positive about refugees or same-sex marriage. No matter how many right-wing commentators spout their ideology, no matter how the news is massaged, it will never be enough for Eric and friends, in fact they won't notice.

Conversely, when I complain about right-wing bias, it is because of what I have outlined above. I am not suggesting that every right-wing opinionator be replaced by a member of Socialist Alliance or Greenpeace, or that news bulletins be vetted by the prime minister's office. I am suggesting that the obvious sources of bias be removed. That experts once again replace ideologues, that news bulletins contain, well, simply news, that unflattering photos and headlines are not deliberately chosen. The former board members and chairman have, largely, now been replaced by a much more neutral group, and this is a good start — although we need a mechanism to ensure that the blatant Howard Board stacking can never occur again. But it is going to take as long to turn the ABC Titanic around as it took to steer it towards the ice pack in the first place. Most of the young people on the staff now have had no experience of what a neutral, professional, objective ABC would actually be like. If I am asking for neutrality, and the Right is asking for even further movement right, it suggests not that the ship is balanced but that it is listing a long way to the right already.

With an Abbott government installed by the media the ABC is going to hit an iceberg and sink totally. We need to change its course before it is too late.

(This story was originally published on David Horton’s The Watermelon Blog and has been republished with permission. Read David Horton’s open letter to ABC managing director Mark Scott by clicking here.)