Photos and the digital dark age: We’re just not getting the picture

We should be printing those Instagram images to avoid losing them to the digital dark age, forever, writes Cherie Moselen.

ONLINE IMAGES of cats in hats and cute coffee-art seem to be everywhere lately, as social media users in large numbers go about frothing their own work with phone cameras.

However, while the popularity of today’s cyber version of show and tell is soaring, the custom of preserving photographs for posterity appears to be in the doldrums.

In the 1970s, during my teenage years, I went everywhere with a 35mm Visimatic in search of recordable moments.

Most often, this meant clicking the shutter on an embarrassing incident that involved my sister. (Like the time she handed a wand instead of a pen to a guy whose car she had just rammed on her way to a party — that can happen when you go out dressed as the good fairy.)

Having a somewhat clumsy sister – with a glorious stumble that once brought our neighbour’s chook fence down around her in a hail of wire and star pickets – gifted me endless hours of fun, fixing her signature disasters with stickers of clowns and monkeys eating bananas.

These mementoes were then sealed in perpetuity behind thin sheets of protective plastic and the album placed in a box under my bed, where my sister was unlikely to find it.

Back then, when the closest thing to uploading an image to cyberspace was tracing a face in the night sky with a sparkler, everyone kept photographs: if not in albums or scrapbooks, at least in a shoebox somewhere. The mere cost of developing them ensured their value.

Baby boomers treasure them. Pets aside, they are the items we most often grab in a fire. But, if my own two teenage members of the Insta-generation were asked to choose their top saves from a burning building, I doubt printed pictures would beat out an iPod or a pair of Dr Dre’s.

For them and other 21st-century social media users like them, photos are trophies, not keepsakes.

Since the camera design patented in 1840 by Alexander Wolcott began to reproduce images that would not fade away with time, photographs have held a special purpose in our lives.

Family photos, in particular, are ancestral breadcrumbs that we follow backwards in time, in order to find ourselves. 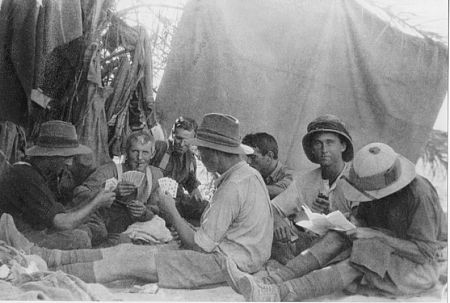 This black and white is of your great grandad Marchant, who lost both his legs — one at 80, the other at 82. But, he was back deep-sea fishing a few years later. Here he is sitting in the trenches in Egypt in 1915, playing a game of cards. The cursive script on the back says ‘signaller, in training’. It is from him you get your resilience ...

... This is a picture of your 83-year-old Kiwi Nana holding a cup and looking deadly in her Santa hat. Like you, she loves to talk. She also loves to party. Under this picture someone has written, ‘I’m guessing that’s not coffee in her cup!’

You get the picture.

The success of television shows like the BBC’s Who Do You Think You Are, which profile celebrities as they trace their ancestors – and which inspired a “Shake Your Family Tree” day in Australia to promote genealogy – suggests self-discovery never goes out of fashion.

Of the passionate searches that eventuated because of a single photograph – corners bent, edges curled up from rubbing – all had echoes of the same personal quest.

A leather-bound family album of old black and whites sent me out into the world searching for deeper insight into myself.

Will a bunch of jpegs encourage a similar wanderlust among any future grandchildren I might have?

Perhaps. But, I suspect the tedium of trawling through digital files will be more likely to send them on a trip to the kitchen for a caffeine hook-up — and that is supposing they have access to past family photos at all.

Because seriously, are Generation Next really going to hand down memories on memory sticks as part of a future legacy?

It is sad to think that photos like the ones that influenced my life are being digitally scanned and the originals thrown away. Transience is trending, space is at a premium and the hard copy is not cool in the digital age.

According to online statistics portal Statista, the number of worldwide social network users is expected to reach about 2.95 billion by 2020 — approximately one-third of the Earth’s population.

Even if only a fraction of them post images online and then forget them, that’s an awful lot of photographs sitting around to little or no purpose. Yes, their candid footprints are still traceable within that great warehouse in the sky, the internet, but "out of sight" often means "out of mind".

Getting them back from whatever cloud they’re lining might not be a done deal either.

Print Your Photos or Risk Losing Them to the Digital Dark Age, Internet Pioneer Warns https://t.co/DaXAMQMSwX

At an American Association for the Advancement of Science conference in San Jose in 2015, internet pioneer Vint Cerf warned people to print their photos if they want to ensure their survival, because there is no guarantee all digitised formats will be readable in future. He also highlighted the problem of data disappearing in the "digital dark age".

In less developed parts of the world, a picture is worth the proverbial 1,000 words and more.

Several years ago, I spent a month in a rural village in India’s West Bengal, where photographs are rare. Of the 400 people living in the village’s mud huts, most have little or no experience with electricity, let alone exposure to the application and practice of photography.

Encouraging these guarded villagers to embrace the mystery of my camera was an unforgettable experience.

I got my only smile in hours at an “Untouchable” village when I showed a mother a photo of herself with her child.

During my stay, I heard that charitable do-gooders were taking photographs of children from poor families in Kolkata to give to parents who have no means of identifying their sons and daughters should any go missing.

Sometimes the essence of photography is such that the aesthetic and the empirical come together, as in Sting’s haunting track, 'They Dance Alone', from his 1987 album Nothing Like The Sun.

The song shapes the beauty and sorrow of the women who perform Chile’s romantic dance, the 'Cueca'.

The Cueca is traditionally danced with partners. However, during the years when Chilean dictator Augusto Pinochet “disappeared” thousands of citizens, groups of women hung photos of their men around their necks or pinned them to their shirts and danced the 'Cueca' alone.

This solo dance, done in protest of a murderous regime, is known as the 'Cueca Sola'. And it is photographs – indelible proofs of missing loved ones – that give the dance its powerful resonance as an expression of loss.

For some families, pictures are all that remain.

I have nothing against Instagramming or sharing images online — I do it myself. However, it’s a regrettable thought that long-cherished photographs won’t reach the hands of our children’s children if their value to the youth of today continues to diminish. (Although a copy of Sting’s LP might just make it out of a burning building if vinyl production continues its spin on the nostalgic turntable.)

So, with future offspring in mind, this Christmas I will be putting last year’s family holiday photos into an album and wrapping it up for my kids, with a note: Important pictures. Must go into the moving box with your poster of The Godfather and your Toy Story print!

Unless they see that photo of me in the Louisiana bayous, leaning out of a boat alongside an airborne alligator, how else will my great grandchildren know where their sense of adventure comes from?

This exhibit has already passed, but this article is still relevant on the subject of memory and photography:https://t.co/BXveMFSnLl

The History Of Modern Chile, Mirrored In Dance :Chiles answer to the blues NPR http://bit.ly/6ZHr6F

12 December 2020, 3:00pm The Australian film and television industry has lost one of its luminaries, Picnic ...

Photos and the digital dark age: We’re just not getting the picture

30 August 2017, 4:30pm We should be printing those Instagram images to avoid losing them to the digital ...
Join the conversation
comments powered by Disqus
News updates