Peter Jukes: The hacking trials and the Murdoch legacy

Even though his lieutenant Rebekah Brooks was found not guilty at the Old Bailey last week, Rupert Murdoch is not out of the woods yet, writes Peter Jukes.

TO THOSE WHO WEREN’T in court each day for the phone hacking trial at the Old Bailey, the ‘not guilty’ verdict on Rebekah Brooks, former CEO of News International, and probably Rupert Murdoch’s closest protégé outside the family, seems to have come as something of a surprise.

As James Doleman explains in the Drum, there was always a paucity of direct evidence against the former editor of the now defunct News of the World and Britain’s then best-selling tabloid, the Sun. There are a variety of reasons for this.

Brooks was editor of News of the World from 2000 to the end of 2002. The call data which sank her deputy, successor and lover, Andy Coulson, only exist for a brief year around the time of the arrest of private detective Glenn Mulcaire, and former royal reporter, Clive Goodman in 2006. These show over 1,500 hacks from News International landlines and Mulcaire’s mobile over a 12 month period. The prosecutor, Andrew Edis QC, called this a “torch light” shone on the relative darkness.

Then, of course, there are 30 million missing emails from this era, and boxes marked as Brooks’ notebooks 1998-2007 were taken out of archives by her assistant Cheryl Carter on the day Coulson was arrested and their contents destroyed.

Absence of evidence is not evidence of absence, but the jury took the view from all the circumstantial evidence, they couldn’t be “sure” Brooks must have known.

They jury were aided in that decision by the most expensive criminal defence ever mounted in British legal history. To have one privately funded criminal defence is rare. To have six in one trial is unheard of. As Nick Davies points out, time and time the prosecution were outgunned by the greater resources of the defence team, who were paid about the same per day as the privately funded barristers were paid per hour.

It’s better to be a fool than a knave and it’s fair to say Brooks should have known. I’ve spoken to various former NI execs during the trial, who worked with her, and they all say the style of Murdoch’s newspapers is that the editorial budget is guarded jealously, by editors.

Thus, Brooks should have known about the £100k a year retainer paid to Mulcaire. She should have known a senior Sun journalist was illegally paying a public official. She should – as a campaigning editor obsessed with the murder of children – seen that voicemails from a murdered Surrey schoolgirl Milly Dowler appeared in two editions of her paper.

Not guilty of any crimes, Brooks is still culpable for massive editorial incompetence. This fact alone might make her rumoured reinstatement in Murdoch’s employ in Australia highly unlikely.

And it doesn’t stop there.

In a telling answer to the judge the Honourable Mr Justice John Saunders, who quizzed Brooks over her actions in 2007 when, in defiance of all her public statements about decrying phone hacking, she offered Clive Goodman several jobs on release from prison, when he was threatening to expose the industrial hacking at NOTW, all Brooks could utter, weakly, was:

“I was loyal to the company."

Even her barrister, Jonathan Laidlaw QC, had to concede that this cover-up from 2007-2011 was the weakest part of her career. Both she and Coulson explicitly and implicitly blamed their superiors at News International for telling them what to do.

This is where, though he must feel some relief that Brooks has been found not guilty, both Coulson and Brooks kicked the ‘problem’ upstairs. Both of them, and her predecessor as CEO of News International, Les Hinton, have been interviewed under caution for corporate charges. As he flew into London late last week, Murdoch himself was facing police interview as a suspect himself.

The latter came as a bigger shock to me than Brooks’ acquittal.

It may have something to do with the fact, as I revealed on the Daily Beast, the Metropolitan police discovered during the trial a DVD with some 80,000 emails culled by the FBI from News Corp HQ in New York. As well as a Department of Justice investigation in the US under the Foreign Corrupt Practices Act, the ending of the London trial could speed up a promised Congressional hearing into News Corp’s practices.

But the biggest threat at the moment is a Scotland Yard investigation into corporate charges.

My understanding is that the matter has now been handed over to the Crown Prosecution Service, who will take a view whether to initiate proceedings. Though Brooks has been found not guilty on phone hacking, hiding evidence during the closure of News of the World and bribing public officials, more evidence has come to light during the trial of a potential ‘controlling mind’ in the company. This actually might make prosecutors more determined to indict the corporate body.

It was this threat which accelerated the split in 2012 between the publishing arm, News Corp, and the much bigger movie and pay-tv companies, 21st Century Fox, because of the danger to lucrative TV licenses of a corporate charge. News Corp’s general counsel Gerson Zweifach told Scotland Yard a corporate prosecution “would be apocalyptic” and “kill” the corporation at a cost of tens of thousands of jobs.

Those threats may have receded a little, but they haven’t gone away. Murdoch’s admissions last year, through secret tapes of a meeting with Sun journalists, that payments to police were the norm in Fleet Street, didn’t help his case, either with the police, or with his New York board.

Rumours are Rupert Murdoch is still unwell after a fall at Christmas and the return of both Lachlan and James in a sign a handing over will soon be taking place.  For all the spin and power of his media outlets, nothing can quite expunge this stain on his reputation. Moreover, the competitive Murdoch has spent an unprecedented amount on the phone hacking trial — an estimated £75 million compared to the £25 million cost to the public purse of the court trial and the police investigation. We now know there were 5,500 victims — not just Hollywood stars and heirs to the throne, but a large number of senior cabinet ministers and their aides, and then random members of the public who got trapped in the media spotlight through having a relative murdered, or merely, like Laura Rooney, having the same name as a famous footballer.

Next Friday, six of the eight people indicted for phone hacking will be sentenced at the Old Bailey, including Andy Coulson, former press spokesman for the Prime Minister and three senior News of the World editors. That the news room of Murdoch's biggest selling newspaper in the world has been condemned as a toxic criminal enterprise is not the legacy he wanted as he looks towards inevitable retirement and an unenviable succession. 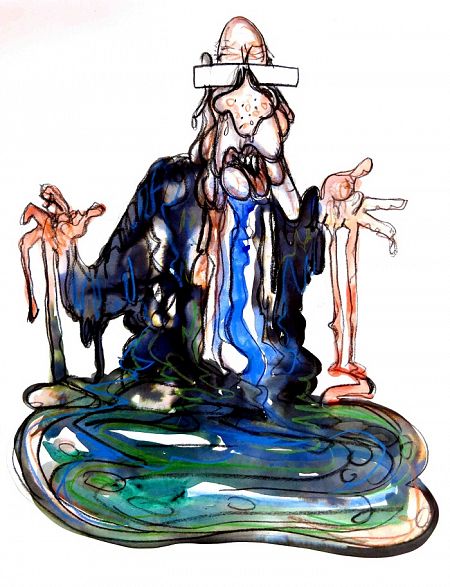 Morgan, Marunchak and Murdoch — one remove from murder

11 August 2015, 6:00pm In Britain, just like in Australia, Rupert Murdoch has pushed a conservative ...
Join the conversation
comments powered by Disqus
News updates