In Britain, just like in Australia, Rupert Murdoch has pushed a conservative Government to gut the public broadcaster. It will all end in tears, writes Peter Jukes. 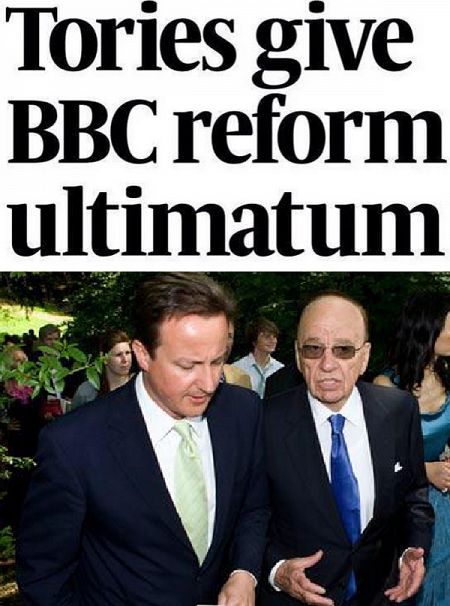 'History repeats itself, the first time as tragedy, the second time as farce.'

~ As Hegel apparently didn't say, despite what Marx claims.

At the end of last month, Chris Bryant MP, shadow minister for culture, challenged Chancellor George Osborne over an alleged secret meeting with Rupert Murdoch in the days before the Treasury imposed a £650m budget cut on the BBC.

If true, this would make 2015 a re-run of the 2010 election when – as recorded amply by the Leveson Inquiry – a back door entrance by Rupert Murdoch to Number 10 was accompanied by a back room deal to limit the budget of the BBC.

As I've detailed in my 2012 book, the Fall of the House of Murdoch, the plan to shrink the BBC by 30 per cent was part of a four year dance between Cameron, Osborne and James Murdoch, as he vied to cement his succession at News Corp by buying the whole of BSkyB and amalgamating News International and Sky in a digital hub at a new base in Isleworth.

Called Operation Rubicon, the deal would have sealed the Murdoch family as owners of Britain's most lucrative TV channel and its biggest newspaper group — a virtually unassailable position in the media landscape. Their only real (non-commercial) competition was the free news service provided by the BBC both in broadcast and online.

This was not a good moment for democracy, as I wrote in 2012:

But in 2010, David Cameron didn't have a majority. The Coalition with the Liberal Democrats meant the planned BBC cuts were not 30% but 16%. And then the phone hacking scandal and the closure of News of the World derailed the BSkyB bid.

Round Two: General Election and Budget 2015

Despite the quite shocking revelations of back channels and meetings between senior News Corporation executives and various senior Conservatives and their assistants in the run up to Operation Rubicon, it appears this back door deal is at work again.

After a brief phase of vitriol during the Leveson Inquiry, the remaining papers of News UK began to back Cameron a year or so ago and attack the Labour Party relentlessly.

The Sun's coverage was demonstrably more vitriolic and one-sided than even the notoriously toxic anti-Kinnock campaign of 1992. Meanwhile, the Times of London, the former paper of record, was caught out with a front page lie about a IFS report on a "£1,000" tax bombshell for every family in Britain if Miliband should win.

I personally heard well-sourced reports of London Mayor and Conservative parliamentary candidate Boris Johnson meeting Murdoch for a lunch a couple of weeks before the election. I doubt the steak cutlets were the only thing on the menu.

So, what was the quid pro quo for the support of the biggest newspaper group in the UK?

And just as in the period before the 2010 election, a dance of policy and profit took place in the weeks following the election and leading to the June budget.

The Sunday Times ran a universally derided and factually laughable piece on Snowden by Tom Harper, in which the reporter basically acted as an unquestioning stenographer for some unknown government spokesperson.

Then there was a paean of praise for benefit cuts, clearly leaked in advance:

And, finally, the obligatory BBC bashing in both reporting and editorial which – given the constant complaints that free news undermines the Times paywall – failed to declare a transparent interest:

Dropping the mandarin pretence, the same was said in The Sun's inimitably brutal fashion:

Of course, this less than subtle messaging was heard at the Treasury who, within days of these articles, went on to cut the BBC in late June.

Bryant is requesting urging clarification of Osborne's meetings over this period.

Problem won't be solved by cutting the BBC

One of the most extraordinary elements of this phase of successful lobbying by News UK is that somehow it has corralled most other newspaper groups to back attacking the BBC, even though only Murdoch's company will really benefit from BBC cuts by expanding its broadcasting activities, and snapping up Sports rights.

The position of Stephen Glover from the Daily Mail is perhaps the most illogical. He claimed on BBC Newsnight that Murdoch was a "minnow compared to the BBC" - an odd assertion. Sky Revenues, at more than £7 bn 2013-14, are well over double that of the BBC.  The two companies the Murdoch family controls, News Corp and 21st Century Fox, are the second biggest media conglomerate in the world with a capitalised value of over $80bn.

Glover's claim that somehow the BBC was creating problems for newspapers was even echoed by the Chancellor himself who said before the budget:

“You wouldn’t want the BBC to completely crowd out national newspapers."

Even the Mirror Group echoed this fallacy, with editor-in-chief of the Daily Mirror, Lloyd Embley, telling me on Twitter that the BBC's local online news service had destroyed jobs in local papers.

The problem with all of these supposed diagnoses is that they're completely misconceived, and cutting the BBC will only cut the BBC, and will do nothing to improve the problems of papers.

It's the Ad Revenue, Stupid

Public service broadcasting has been around for nearly a hundred years. The real threat to newspaper journalism has clearly taken place in the last two decades. The fall of circulation is one thing, but since the cover price only covered the costs of production, the real problem is a massive fall in advertising revenue.

As I explained three years ago on the Daily Beast, $40bn in advertising revenue has left publishing.

Where has it gone?

A quick look at Google's $40bn a year profit, mainly from ad revenues, should be a good clue.

The fact is that with the rise of the internet and online, people are disbundling their news. This is taking place in virtually every advanced economy, with or without a public sector broadcaster.

Meanwhile, global advertisers are much more likely to use Google or Facebook to target their customers directly than go through declining printed papers, or even news sites, where the metrics of click through and traffic are either minimal or manipulated, and where ad-blocker software can easily bypass all the advertising.

With even the Financial Times selling itself to Nikkei because it has reached an 'inflection point' with its once heralded paywall, the truth is most newspapers have failed to solve the problem of making money in the internet age.

So the sad and ultimately destructive thing about the newspaper campaign against the BBC is that it will do nothing to help the Telegraph, Times, Mirror, Sun or Mail make money to pay journalists. It will reduce the amount of domestic coverage, and the only beneficiary will be Pay-TV.

In short, Fleet Street has effectively been forced into a desperate coalition with the Murdoch family.

And just as with the Coalition between Conservative and Liberal Democrats, the remaining newspaper groups are in danger of being eventually be consumed by their bigger competitor.

This story was originally published on Peter Jukes' website Byline on 31 July 2015 under the title 'CORPORATISM IN ACTION: THE OSBORNE/MURDOCH BBC STITCH UP'.

Morgan, Marunchak and Murdoch — one remove from murder

11 August 2015, 6:00pm In Britain, just like in Australia, Rupert Murdoch has pushed a conservative ...
Join the conversation
comments powered by Disqus
News updates