The Occupy protestors should focus themselves on stock-market traders, whose main job is to leech money from ordinary people, says Frank O'Shea. 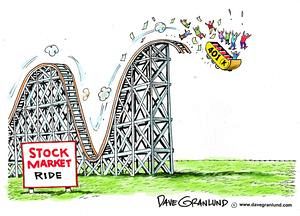 Demonstrating against corporate greed is like opposing teenage sex and in each case is likely to be met with derision. The Occupy activists in Sydney and Melbourne, like those in New York and Rome, are unlikely to have any lasting effect because their target is as diffuse as it is impractical. There is no single person or regime that can be targeted, no easily identifiable injustice. Egyptians and Syrians marched to get rid of a dictator; Australians gathered in noisy numbers to oppose a new tax; people assemble to support gay marriage or higher wages; in all cases, there is an identifiable focus for the dissent.

Those occupying Martin Place or Wall Street believe that the system is loaded to advantage financial institutions at the expense of ordinary citizens. They are well meaning but ultimately ineffectual because the media will not give them the attention they deserve if there is no single person, entity or system that they can highlight.

Yet there is one villain that is easily recognisable and deserving of their wrath: the stock exchange. Not the building itself, but the whole system of buying and selling intangible products in a way that benefits only those who have the specialist knowledge required to understand and work the system. I am not referring to insider trading, though there is little doubt that only a fraction of those involved in that activity are ever caught. I am speaking about the legitimate trading of stocks and shares, a cornerstone of capitalism.

The word you see most in describing the stock market is rollercoaster. The market goes up for two days and then goes back down for three days and then back up again. The bigger the swing, the more money someone is making. Ultimately, the thing that decides which way it goes is whether people are buying or selling; the basic principle, whether of the stock market or the high street, is that demand sets the price. Unless, of course, some people are manipulating the whole thing.

There is a legal activity called short selling which involves trading something that you don’t actually own. In a volatile market such as we have at the moment, there are people making huge profits in this way. They sit at a computer screen and make money by pressing a few buttons at the right time. Since this is a zero-sum activity, their gain is someone else’s loss.

Those losses will be spread over a large number of people: super funds, retirees, charities, public bodies. And since there is no shortage of computer-savvy carpetbaggers all drawing from these sources, the losses quickly build up. The skimming of bank teller machines is in the ha’penny place in comparison.

There used to be a theory that if a particular part of the economy was doing well, the benefits spread downwards to people who had no connection at all with that activity. “A rising tide lifts all boats,” is how it is earnestly put by those helping themselves to the cream. Clearly the converse applies also: if there is an industry that is prospering by short selling or hedging or some similar method, then their profits are coming from innocent people who have no understanding of how they are being ripped off.

The usual defence of the stock market and particularly of techniques like short selling or hedging is that they can also lose you money. But, while no doubt there are spectacular examples, these activities take place because it is a sure way of making money without doing anything for it.

The bus driver who takes you to the city, the waiter who serves your coffee, the policeman who keeps you safe, the teacher who looks after your children, the doctor who treats your illness, the mechanic who fixes your car — all these people do something for the money they earn. They provide a service for which they receive payment. But the person whose only activity is moving trades around on a computer screen does nothing useful to society, makes nothing, helps no one, just gloats like a Fagin at his easy wealth.

I stress that what is going on is not illegal. And this is why the 99 per cent need to be heard so that they can shame governments into taking tighter control of the stock market and of the people who trade with our money.

The value of the Australian dollar goes up and down by the day; the bigger the change the more money someone is making. The same goes for oil or metal prices or farm futures; the wild up-and-down of the stock market is taking money out of our pockets.

If the folk marching in the world’s major cities could find a single entity to focus on, they would have some prospect of forcing change. And what better place to start than the world’s stock markets?