Metgasco win fails to simplify the future of CSG in NSW

The latest pitched battle between community and Metgasco has resulted in a member's bill by the Greens to end CSG mining in NSW. This should prove an interesting test to see how genuine other political parties are about a change of heart on fracking. Lachlan Barker reports.

ON APRIL 24 this year, Judge Button of the Supreme Court overturned a state government order to coal seam gas (CSG) company Metgasco to cease exploring for gas on PEL 16, situated in the locality of Bentley, 15km south west of Lismore on the North Coast hinterland of NSW.

This initial “stop activity” order was given almost a year ago. The situation came to a head with the news that Metgasco’s drilling rig was on its way. Thousands of protesters converged on the Bentley site to join those already there and block the drill rig’s access.

Word went out that 800 police had been conscripted from around the state to break the blockade, or at the least escort the rig in. No one knows exactly what went on in the corridors of power next, but it was rumoured that the police were concerned that a 800-strong force was not only “overkill” but they would likely face resistance from union members who were reluctant to clash with the local community.

The next thing, on 21 May 2014, the Resources and Energy Minister Anthony Roberts announced that he had suspended Metgasco’s Activity Approval to drill, citing lack of “genuine and effective consultation” with the community. The camp was dismantled, and the protesters returned to their homes. 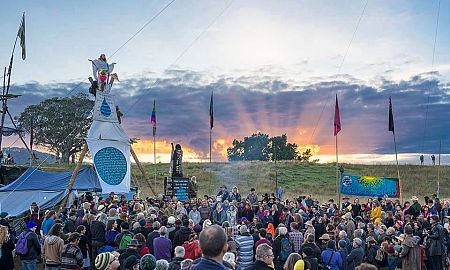 However, it looks as though the government’s choice of the “community consultation” clause to suspend Metgasco’s Activity Approval to explore was too hasty. Judge Button overturned it two weeks ago, declaring the minister had acted unlawfully. The judge was careful to point out that he wasn’t commening on the desirability or otherwise of CSG, simply that the NSW government couldn’t use the community consultation clause as a reason to suspend approval.

Metgasco, however, seem to take this “win” to mean that this was the touchstone test case for all CSG activities in NSW, announcing plans to drill again at Bentley in approximately three months’ time, as soon as another rig can be contracted.

But Metgasco may presume too much because the court case raised more questions than it answered.

Those opposed to Bentley, led by Jeremy Buckingham from the NSW Greens, have mobilized with speed. The NSW Greens are pushing for a legislative solution to the problem of CSG imposed top down upon communities. This is required due to the on-again, off-again history of the so-called “public Interest” test. The public interest test, allowing for approval to be suspended, was added as an amendment to the Petroleum (Onshore) Act 1991 in 2013. The Act governs all CSG activities in NSW.

The amendment was inserted following the Independent Commission against Corruption (ICAC) findings on Bylong Valley coal mines. However the amendment was repealed soon after. A new amendment relating to public interest followed, which itself was repealed in 2014. This left the government of the day up the proverbial creek with no legal instrument to suspend activities should it so choose, resulting in the Metgasco court case.

As a result, last week, just six days after the Supreme Court overturned the suspension order, the Greens introduced a private member's bill to parliament. The media release on 30 April 2015 states:

‘The Bill amends the Petroleum (Onshore) Act 1991 by making it an offense to prospect for or mine coal seam gas and other unconventional gas in NSW.

The Bill does not directly cancel existing petroleum licenses, although it renders them useless, but it does give the Minister the ability to cancel licenses without compensation where it is in the public interest to do so.

This is done by reinstating the public interest test which was introduced by the Government in 2013 but was subsequently repealed in 2014.’

The bill has now been gazetted, and a draw will be held to determine which private members bills are heard first.

I spoke this week with Jeremy Buckingham staffer, Jack Gough, who said:

“With luck the CSG amendment bill will be drawn out early, and it can be discussed in parliament, this or next week.”

“Either way, the Greens will be pushing the government strongly to keep to their pre-election commitment to buy back PELs in NSW, including of course, the Metgasco licence for Bentley.”

I asked Jack about Bentley and Metgasco in the immediate future. Jack responded:

“Everyone is scrambling really to decide what to do in the coal seam gas space. We may even see the Labor opposition pushing the government immediately in this question time on the issue of CSG. The Christian Democrats and the Shooters and Fishers have already made contact with the Greens to work out a position on CSG going forward.”

“And there can be no denying that the community outrage against CSG. Bentley is a good example and has led to this strong push for action to have this destructive and very unpopular industry stopped.”

The upshot seems clear. Metgasco would be unwise to start drilling at Bentley before the vote on the Greens' bill. The community has already signaled it is ready to crank up the Bentley Blockade against any new threat.

Even if Metgasgo were to get their drilling rig through the blockade, there seems little point in the company risking throwing good money after bad.

We await the outcome with interest.