India’s decision to ban the BBC documentary on the infamous 2012 Delhi gang rape has sparked a backlash within the Indian community and around the world. Tulika Saxena, a specialist in women’s violence, reports.

THE RECENT outrage and ban in India over the BBC4 documentary 'India's Daughter' by Leslee Udwin, highlights the creeping culture in India of imposing bans whenever there is a perceived threat to India’s identity and culture.

This ban comes in the midst of a chaotic situation. On the one side, the Home Minister Rajnath Singh left no stone unturned in attempting to stop the telecast of this documentary both in India and worldwide. He claims the documentary is an insult to India’s brave heart, Nirbhaya, a young woman who died as result of gang rape in December 2012 in Delhi. On the other hand, Nirbhaya’s father has declared that everyone should watch this documentary.

Appeal to PM Modi to watch India's daughter, says filmmaker after ban
The action taken by the Home Minister was so quick that no consideration was given to the consequences. Sensing a bigger outrage, BBC4 quickly preponed the telecast of this documentary, and aired it despite warnings sent by the Indian government. The documentary was immediately made available on YouTube, however, within hours the Indian government had it removed.

This rush to ban the documentary is a clear case of overreach, and has created a far bigger furore around the movie than would have otherwise have occurred, and no doubt has served to increase interest from a wider audience. Various mirror links cropped up and on the BBC link, within hours over a million people watched it.

The urgent dismissal of this documentary, which took two years to make and had proper sanctions to do so, has made India a laughing stock worldwide. International media is seeing this as ‘India outraged by the making of this film’. They claim that India finds it hard to take criticism from foreign journalists and that this is an effort to supress undignified views that men hold about women in India from coming out in the open. 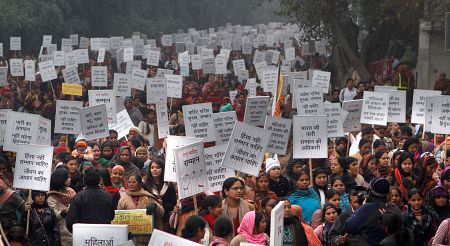 Public backlash over banning of film in India.

However, this is far from the truth as most sections of society, intellectuals, civil society, activists and the general public within India are against this ban and are outraged and dismayed at the action that has been taken.

But there are sections who support this ban and oppose the documentary. According to them, this documentary provides an international platform to the rapists of Nirbhaya to justify their actions and garner sympathy against their death penalty. On top of that, a few sections of the media who brought attention to this telecast claim that the documentary insults Nirbhaya.

Nirbhaya, who is called the ‘brave heart of India’, has changed the way rape is viewed in India, and is a beloved icon for young people here. Nirbhaya’s case generated such a public outcry in December 2012 that, politicians sensing similar outrage if this documentary does insult Nirbhaya, responded within hours and the telecast was put on hold.

On International Women’s Day , NDTV blacked out for an hour in response to the ban.

This documentary does provide fuel for people who are opposing it. Leslee Udwin, the British journalist who made the documentary, has tried to bring out the perspectives of the rapists; what background they come from; what societal norms they have been taught while growing up; and why did they did what they did. It also goes on to show how the families of these rapists are suffering. Perhaps Leslie wanted to convey that everyone loses – even the families of these rapists – but in Indian society where perspectives are so different, this has been seen as garnering sympathy for the rapists.

It is well known in India that the judiciary has been biased in convicting men like these when they know the convicts are the only bread winner in the family and have children dependent on them.

Often, families of the men charged take precedence over the woman and her family who have suffered. It is being argued that one of Nirbhaya's rapists has been given a platform to defend himself as he comes from a poor family and had a difficult childhood. The convicted man also asks why it is only he who is facing the death sentence, when others who have committed similar crimes, and who are perhaps wealthier, are not facing the same severe punishment.

And this is why critics of this documentary are opposing it. Further, the documentary also falls short of highlighting that it is not just poverty-stricken men who hold this opinion, but even politicians, police and lawyers who have not faced a difficult childhood.

Having said that, while there are some sections where this documentary does go off track, it serves its purpose in bringing out in the open how men view woman in Indian society. Thus, it is men who need to be targeted. Imposing a ban on this documentary is no solution. A ban only reinforces the view that it has perhaps touched a sore point for some, including politicians, who are embarrassed that rapists and they think alike. This only encourages efforts to ban it.

However, Indians have already shown that they will not accept decisions forced on them. As more and more voices are being raised against the ban in India, the government might soon regret its haste in not engaging in public dialogue and the subsequent negative publicity the ban has generated.