How you can support #FairgoFairfax

If the Fairfax bosses win this round, we're on the way to almost complete mainstream media Murdochisation in Australia, writes John Passant. 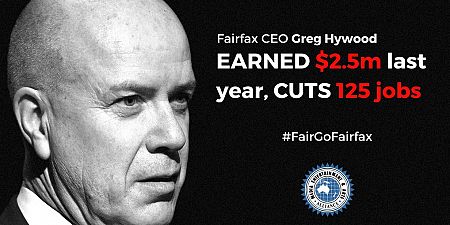 Quality journalism is worth more than one man's salary. Let Greg Hywood know it's no go at fairgofairfax.org.au (Image via MEAA)

FAIRFAX JOURNALISTS have gone on strike for seven days in response to management announcing they are going to sack one quarter of the editorial staff. If successful, this will see 125 journalists from papers such as the Sydney Morning Herald, The Age and the Australian Financial Review on the scrap heap.

It is just the next episode in a decade long attack on print media staff. NewsCorpse is doing the same thing. Fairfax, since 2009, has cut the number of journalists from 1,000 to 500 and, if successful, in this latest round will have just 375 journalists. It sacked 1,900 staff in 2012. Since 2011, the MEAA estimates that mainstream media has got rid of 2,000 journalists.

These proposed round of sackings will "save" Fairfax $30 million in wage costs, although what it costs them in lost readership is anyone’s guess. At the same time, the man driving these sackings, CEO Greg Hywood, has been given rights to 2.6 million shares.

If Hywood passes performance hurdles (by cutting overheads through axing staff, for example) the shares will become his in 2019 — for no cost other than the havoc he has unleashed on staff and readers. At current prices, his reward for sacking staff among other things will be about $2.5 million.

The Fairfax journalists’ seven day strike has the potential to change our understanding of the real class forces at play – or rather at war – in Australia.  It also has the potential (remote at this stage) to turn the bosses’ one-sided decades-long class war against us into a two-sided class war, as more workers, inspired by the Fairfax journalists’ strike, walk out in support, or even begin their own strikes to defend jobs, improves wages and conditions, and win safety on site.

The strike is "illegal" under the bosses’ industrial relations laws. It falls outside the narrow enterprise agreement bargaining period. If the Fair Work Commission orders them back to work because the action is unlawful, Employment Minister Michaelia Cash can then make directions based on that order and, if the workers fail to comply, individuals can be fined up to $10,800 and unions $54,000 for each breach.

After the journalists walked off the job Fairfax sent an email to staff reminding them that the strike was unlawful (that is, illegal) and telling them the Fair Work Ombudsman (FWO) has asked for details. They said that the FWO had noted its investigation of an unlawful strike last year over similar issues. Management also threatened to sack those currently on strike.

The gloves are clearly off. Until the strike, the bosses had been doing all the punching.

This is a fight for jobs and for bourgeois democracy. From Fairfax’s point of view, it appears it could be part of an attempt to sell off the Domain real estate advertising arm when or if the owners split it off from the unprofitable newspaper segment.

If Fairfax management wins this round then we are on the way to a more or less complete Murdoch mainstream print media regime in Australia. In 2013, Murdoch had about 59% of the total newspaper readership, with Fairfax making up 25%. Australia’s level of media ownership is one of the most concentrated in the world.

Another is the increasing Murdochisation of Fairfax over time. Rather than being an alternative to the right wing nut jobs and Screaming Lord Sutches at The Australian, Sky News, the Daily Torygraph and the Herald Scum, (with a sprinkling of sensible conservatives), the Fairfax stable, including The Age, Sydney Morning Herald, Canberra Times and the Financial Review is becoming their adjunct. They are the "acceptable" wing of conservatism.

To defend jobs and retain a weakening alternative bourgeois voice and possibly move that voice to the left, what can unions do? The workers immediately affected have gone on strike and that is a start. Two other Fairfax outlets, in Newcastle and Brisbane, have joined the strike. Good! Other Fairfax outlets should also join.

The papers are still being produced and distributed. Unions involved in their production and distribution could stop work. The issues, jobs and democracy, are that important. Spread the strike to win.

Unions outside the industry could begin to organise support strikes, themselves unlawful. Journalists fined for striking could refuse to pay and be prepared to go to jail for doing so. The sight of respected journalists being dragged off to jail for striking would highlight how thoroughly reactionary and rotten Australia’s industrial relations system is.

‘... every worker should have the right to withdraw their labour in these circumstances.’

When @sallymcmanus stood up for other workers, Fairfax was brutal. Now she supports their right to strike. #auspol #fairgofairfax pic.twitter.com/MeUTB0zFJi

Her task now is to mobilise hundreds of thousands of workers across Australia against these reactionary laws and for that right. That means strikes not just to defend Fairfax workers but to smash these anti-worker laws. The ghost of Clarrie O’Shea and the 1969 strikes of millions of workers that smashed the penal powers' lives.

The journalists could set up their own online newspaper. They could occupy their workpalces and begin printing the truth, not some watered down version of Lord Murdoch.

What can we do? We should support the striking workers. Don’t buy or click on Fairfax sites during the strike.

‘Do not cross the Fairfax picket line. No buying, sharing, clicking Fairfax while journalists are on strike.... We need to show our support and solidarity.’

We can move motions in our unions in support both verbally and practically of the striking journalists.

We can also spread this article to other people to get them to take action in support.

The relevant union, the MEAA, has some suggestions too:

Most importantly, support our members by refusing to buy a Fairfax newspaper or view a Fairfax website over the next few days. And tell your friends and family to do the same.

And of course, for independent journalism that isn’t part of the Murdoch press or those at Fairfax on the way to becoming its cousins, you can subscribe to Independent Australia.

Where else will you be able to get great and uncompromising Budget coverage from IA Canberra Press gallery journalist Dr Martin Hirst?

The Fairfax strike is a real test for the journalists and their union, and unions and members more generally. A defeat would open the floodgates for more media job losses and an even more reactionary media landscape in Australia.

A victory for the striking journalists would slow down these job losses and help move society (and hence the media or some sections of it) to the left. It could be the beginning of a more generalised fightback against job losses and for the right to strike.

Victory to the Fairfax strikers!

Get yourself an IA subscription today from just $5.