This week’s announcement that Stan Grant will be the permanent host of the ABC’s Q&A follows widespread speculation about the future of the program.

On some estimates, ratings have fallen by more than 50% from a peak of over 600,000 during its first decade under Tony Jones, who served as host from 2008.

Hamish Macdonald succeeded Jones in November 2019 but resigned in July last year, describing his 18-month tenure as “a bruising experience”. Aside from being attacked on Sky News for his “far left Green agenda”, he was relentlessly trolled on social media, with virulent accusations of bias from both the left and the right.

Curiously, the BBC’s Question Time – Q&A’s prototype – has followed a parallel trajectory. Its ratings have fallen precipitously, from nearly nine million to just over a million and the decline coincides with the replacement of veteran host David Dimbleby by seasoned BBC personality Fiona Bruce, whose own brand of charisma is no match for the gravitas of her predecessor.

Question Time is something of a cuckoo in the nest. In its 43-year history it has consistently featured leading commentators and parliamentarians; its two most longstanding presenters, Dimbleby and Robin Day, were the equivalent of BBC royalty. But since its takeover by a commercial production company in 1998, the program has crossed the line into terrain more generally associated with tabloid media.

Now its producers prefer guests like Brexiteer Nigel Farage, conservative psychologist Jordan Peterson and John Lydon (alias punk rocker Johnny Rotten), who serve to ratchet up the controversy. It’s been claimed that paid audience plants are instructed to ask heavily weighted questions and that the chairing is biased. And Bruce endures the kind of social media onslaught that drove Macdonald out.

The Coalition is falling even deeper into denial

An appearance by Liberal member Jason Falinski on Q&A has revealed the Coalition's denial over the climate and energy issue.

Reports of “disastrous” ratings may themselves be a form of motivated attack. Audiences now have many more viewing options than the original live transmissions and the BBC has persistently asserted that audience figures are higher than some surveys suggest.

Q&A is in much the same situation: while Sky claims the “lefty lovefest” has scored as low as 228,000, the ABC estimates the regular following through 2021 at more than 400,000. But that’s still quite a drop-off since the program’s heyday.

Are we just jaded with celebrity opinion shows, especially those founded in the left-right dramaturgy? The predictability is at times exhausting.

Macdonald’s best episode was his first, in February 2020, when he chaired a session on the bushfires with a panel that included Kirsty McBain, then mayor of Bega, and Andrew Constance, Liberal MP for the area. The panel sat on office chairs in a semi-circle, genuinely sharing what they had all just been through, including Macdonald himself, who had reported from an evacuation centre as the firefront approached.

A few weeks later, though, it was back to business as usual, with the presenter in a glossy suit fielding the play of left-right argy-bargy in the studio.

We don’t need this anymore. In many ways, the conventions of “robust disagreement” and “both sides-ism” are no longer a positive feature of civil society but rather a threat to it. As Republican Liz Cheney put it in a recent statement to the January 6th Committee, “the normal sort of vitriolic, toxic partisanship has got to stop. And we have to recognise what is at stake".

Stan Grant has several times taken the helm as guest host of Q&A since Tony Jones’s departure. He prompted a furore in March this year when he expelled an audience member who expressed support for Putin’s invasion of Ukraine, asserting the program was contributing to media bias against Russia. There were calls of “propaganda” from the audience as the speaker proceeded to claim that Ukraine was responsible for all the violence.

Aired in the second week of the Russian invasion, this episode included speakers and audience members with family in the war zone. “We encourage different points of view here,” Grant said. “But we can’t have anyone who is sanctioning, supporting, violence,” he said.

Clearly caught off guard by an unscheduled audience intervention, Grant may have missed the essential point: that the statement, intentionally or not, was Russian propaganda. It was a critical moment for many reasons, one of which is that Grant’s subsequent appointment as host could signal a change in direction for the program. 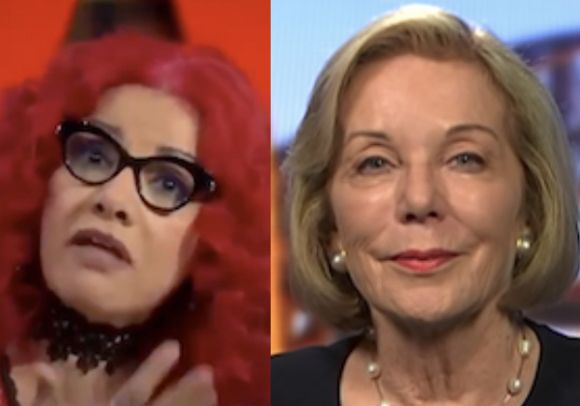 If you were labouring under the belief that women are free to express ourselves in 2019, last week’s episode of Q&A should put paid to that.

That moment also raised the question of when we should call foul on claims about the right to express opinion, especially in a media culture increasingly subject to influence from organised, even state-run, propaganda. And what is propaganda? How does it manifest and how should we respond?

This, surely, would be a good focus for a Q&A program. Peter Pomerantsev, who has studied Russian propaganda for decades, would be the perfect guest. These are times in which we need sustained, forensic focus on complex issues. We need insight and analysis from people with knowledge and experience, not extemporised opinions from celebrities.

The Ukraine invasion is the starkest manifestation of the transformed geopolitical environment. With Donald Trump already moving to gather support for another tilt at the presidency, and the U.S. Justice Department taking its time over the evidence against him, the future of American democracy is in jeopardy. In Australia, we have a leader of the Opposition who talks openly about war with China.

Jones, Macdonald and Grant have all had extensive experience as foreign correspondents. With domestic politics increasingly dwarfed by the massive geopolitical tensions of our era, those issues should be to the fore. Q&A, which originated as a premier platform for the opinion wars, now has an opportunity to lead the way out of them.

Jane Goodall is an Emeritus Professor with the Writing and Society Research Centre at the University of Western Sydney.

This article was originally published by The Conversation with the title ' Can Q&A lead us out of the opinion wars it’s helped to fuel?' and is republished under a Creative Commons licence.