The Abbott Government has confounded financial and environmental experts and betrayed the farmers of NSW's iconic Liverpool Plains by approving a massive 35 sq km Chinese coal mine. Lachlan Barker reports on these dark days for Australia's prime farmland and wildlife habitat.

In a shock announcement, our incompetent Environment Minister Greg Hunt has approved the contentious Shenhua coal mine on the Liverpool Plains. This is despite expert analyses indicating that the mine is not economic, nor environmentally safe.

The mine is situated in the north west of NSW, in the heart of some of the world’s most productive farm land, and, sadly, in the midst of the Gunnedah coal basin.

However, opposition to the mine was already strong and concerted, and now it has ramped up again, fuelled by anger and disbelief over this decision.

The Abbott Government is again putting overseas mining interests ahead of farmers and our climate.

This mega coal mine is set to produce 268 million tonnes of coal over 30 years, just three kilometres from the nearest down of Breeza, yet the climate impacts were not even legally considered.

The Liverpool Plains, with rich black soil, excellent water resources and ideal climatic conditions, is one of our most important farming regions and its productivity is 40 per cent above the national average.

The community will be appalled at their local member and Minister for Agriculture, Barnaby Joyce, who has grossly failed to protect the Liverpool Plains.

With the coal price in structural decline, it’s economically insane to be sacrificing valuable farming land for the dying coal industry, especially when we have viable renewable energy alternatives. 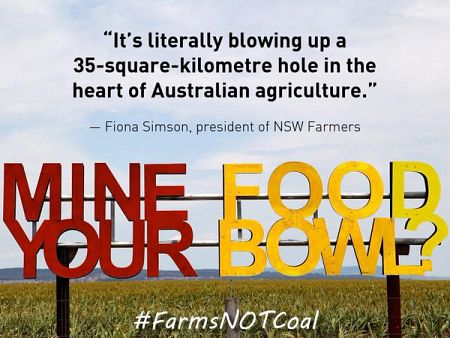 Previously here at IA, in conjunction with figures from The Australia Institute, working with the Caroona Coal Action Group, we have pointed out that the mine is not economic in the current financial climate. The mine’s original proposal relied on revenue projections done in the days of much higher coal prices, yet those old prices still seem to have been used to justify this mine.

Mining in the heart of the best agricultural area in NSW is a betrayal of farmers and the national interest.

The blowhards in the National Party have lost all credibility, being in government at both state and federal levels they were still unable or unwilling to stop this disastrous mine.

No doubt the local farmers will take a stand to directly oppose the construction of this mine and the Greens are ready and willing to stand side-by-side with them.

However Shenhua Australia released its own press release, with chairman Liu Xiang reported in The Land as saying:

'Our immediate priority is to carefully review the Commonwealth approval conditions to determine if they will have any impact on the project’s technical feasibility and economic viability.'

In light of @GregHuntMP approving Shenhua coal mine, here's a comparison of its approximate size compared to Sydney. pic.twitter.com/yKYVycUmpS

This gives hope for the ongoing fight to stop this mine, for it is as clear as crystal that this mine is not financially viable.

And I’ll just outline more of the mathematics of disaster here.

The Shenhua mine is to produce ten million tonnes of coal a year, comprised of semi-soft coking coal, used in steel making, and thermal coal, used in power generation.

Now Shenhua bizarrely claim that 83% of the coal from the mine will be the higher priced semi soft coking variety, but this is more hopelessly optimistic thinking from Shenhua.

For just up the road from Shenhua is the equally contentious and environmentally destructive Maules Creek and Narrabri coal mines run by Whitehaven. These mines sit on the same Gunnedah basin coal beds that Shenhua wish to plunder, so we can take a production parallel from there.

So after their first full year of mining they will have an output of minus US$110 million.

And that of course doesn’t include capital sunk costs that have to be deployed to actually build the mine in the first place.

Enough said, this mine will never make money.

At the end of the day, and as ever, the Federal and state governments’ mantra regarding coal is just "approve, approve, approve", regardless of environment or finance.

What has to be hoped for now is that those who do the financial analysis for Shenhua aren’t fools, and see that they will never make a profit with this mine.

Lachlan blogs at cyclonecharlie88.blogspot.com.au and you can follow him on Twitter@CycloneCharlie8. You can help STOP a huge, dirty coal mine from being developed in the heart of Australia’s food bowl by signing this petition.

.@Barnaby_Joyce You should resign. You are our Agricultural Minister and our local member and HOPELESS. #Shenhua #LiverpoolPlains #fail