Truck off! Scrapping Road Safety Remuneration Tribunal endangers us all

The Turnbull Government is looking to abolish the Road Safety Remuneration Tribunal (RSRT), set up by the Gillard Government to set minimum hourly pay rates for truck drivers.

Turnbull is acting, apparently, at the behest of owner drivers, some of whom have appeared beside him at press conferences to say they will be put out of business if they need to pay these minimum hourly rates.

Say the owner drivers, the big trucking companies (whose drivers are already subject to awards) will drive them out of business because the little guys don’t have the “economies of scale” to be able to compete.

It is easy to feel sympathy for owner truck drivers and their families whose livelihood may seem threatened. These truckies are hard workers, who toil for extraordinarily long hours for little pay hauling big loads, often from one side of the country to the other. They do this to put food on the table for their families. To threaten their jobs, of course, seems harsh, perverse and wrong.

Yet, the reason for the minimum rate of pay is for the safety of the drivers themselves and the public. The Government’s own reports show the transport industry is the most unsafe industry in Australia, with higher fatalities than any other − 12 times the average rate of all industries – and that RSRT orders will reduce crashes by 28 per cent.

You need to question a business model that cannot afford to pay drivers a safe minimum hourly rate before it is put out of business. You also need to question an economic system that requires truck drivers to work unsafe hours just to earn enough money to live and a Government prepared to scrap a body set up to save drivers’ lives.

The Government says its moves are all about supporting small business owner drivers. However, it seems far more likely that these moves are more about limiting supply chain costs for the Liberal Party’s big business backers — such as big oil companies and retail chains. Big businesses like Woolworths and Coles, for example, currently enjoy far lower freight costs because lowly paid owner truck drivers are prepared to work 18 hours a day or more to haul freight across the country at survival rates. This competition, of course, also serves to force down the prices of larger freight companies to the benefit of big business.

Of course, needing to work these longer hours provides a dangerous incentive for truck drivers to speed and take drugs to get the job done. This not only puts drivers at risk, but also endangers the safety of general public — families and workers going about their daily business on Australia’s roads.

According a Government commissioned PWC report:

‘When all parties, including drivers of other cars and pedestrians, are taken into account, 193 people were killed in heavy vehicle crashes in the 12 months ending December 2013.' 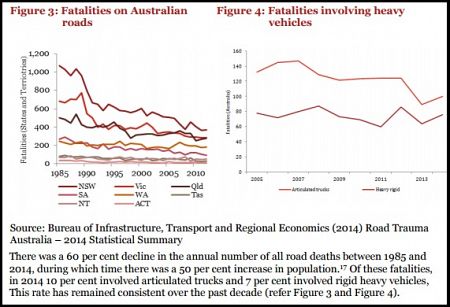 Truck crashes are also very costly to truck drivers, the public and the economy, the same report says:

‘According to the National Truck Accident Research Centre’s report, there were 549 truck crash incidents with damage of over $50,000 per incident in 2013. This resulted in an aggregate cost of $71.7 million for vehicle owners and drivers, third party vehicles and in relation to property damage.’

The Turnbull Government, however, says there is no link between the pay rates of truck drivers and the safety of our roads.

This assertion defies common sense and is disproven by the Government own reports and the statistics of fatalities on the road since the Road Safety Remuneration Tribunal came into effect. 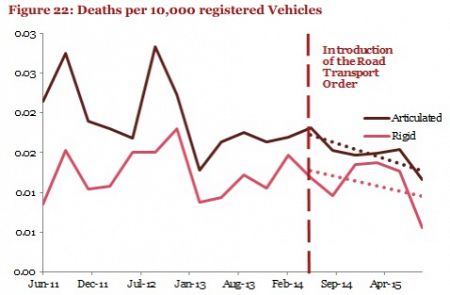 Rather than engage in a review of its latest order, Malcolm Turnbull now seeks to abolish the Road Safety Remuneration Tribunal as early as next week. He is doing this, he says, to save the businesses of some struggling truck owner drivers. In fact, he is doing it to keep down costs for the Liberal Party’s big business cronies and sponsors. And, in doing so, he is putting truck drivers’ lives at risk.

Worse, he is putting your life at risk – and perhaps the lives of your children, as you drive them to school in the morning and run the risk of an overtired long haul truck driver, high on ice, say, running your car off the road and killing you all.

Truck drivers are not second class citizens. They deserve reasonable rates of pay. More importantly, they deserve to stay alive. And so do you and your children. No business’ survival – big or small – is more important than theirs.

RSRT established to ensure Truckies were paid a wage that allows them to operate safely@johndory49 #auspol @TWUAus pic.twitter.com/x9jNBboBE6

The voting members of the Australian Trucking Association council: https://t.co/PoZgIYqxac Not many owner drivers. pic.twitter.com/gHdnnNT640

Getting rid of the #RSRT is #55 on the IPA's list of 75 directives to the Liberal Government https://t.co/x6Iywf1ixH pic.twitter.com/Y7FLczFVQv