Germany a coffee giant without growing a single bean

By Julia Thiemann | 17 July 2012, 7:59am | comments |
Germany is one of the leading coffee exporting countries in the world, without having a single coffee bush. Countries like Germany buy raw coffee beans from developing countries and make profit out of processing and re-exporting the brown commodity. Why do producing countries not maximize their gain by processing the coffee locally? Julia Thiemann tells the story of the journey of a coffee bean.

The journey of an African coffee bean

Bernard Wolimbwa is smiling confidently. He is currently setting up his second plantation in Nambonga, Eastern Uganda. He started growing coffee 17 years ago after his farm was robbed and his cattle stolen. Now there are over 30,000 coffee trees on “Nacofa” — the name of his plantation is an abbreviation for Nambongo Company Farm.

The stories of Bernard and many other farmers in Uganda are promoted by the American-based company Crop to Cup to show the origins of the products they sell. “It will be giving me a lot of satisfaction to know that this coffee is gone overseas to this consumer who is drinking it and feeling happy.” In the Crop to Cup information video he adds proudly: “I want to assure you that you will not have any complaints."

More than 10,000 kilometres away from Uganda, in Sydney, Australia, the German student Chris Waage is drinking a cup of coffee and is smiling happily. He enjoys good coffee and this one promises a “Velvety, Rich Roast”; it tastes familiar to him, a bit like home. It was processed in Germany, one of the countries with the biggest roasting industry in the world. But this is not the only soluble coffee product “Made in Germany” that you can find in Australian Supermarkets — Nestlè Caro Cafe and Organic Mountain Café de Colombia, to name two, also refer to Germany as a step in the supply chain when reading the small print.

Germany is the second largest exporting country of roasted coffee in the world — right behind Brazil. Even more remarkable, Germany is situated among the top ten of green coffee exporting countries — surrounded by Mexico, Colombia, Ethopia and Vietnam. Obviously, Germany is outstanding in many ways: it does not even feature the climate conditions for growing coffee and, furthermore, labour is not cheap in Germany.

About 98 per cent of German imports of green coffee come from developing countries, exceeding the EU average by 10 per cent. About one third of the green coffee is directly re-exported, a great deal to the US. 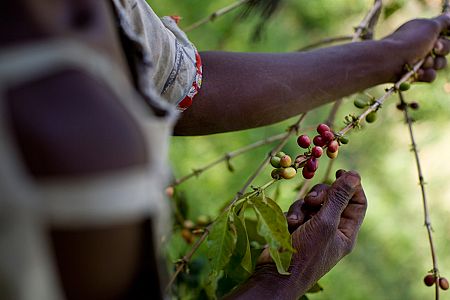 Developing countries like Uganda mostly export green coffee instead of roasted beans which could be sold at a much higher price. This is a crucial point, because, as the non-governmental organisation Oxfam states, if Africa managed to increase their exports by 1 per cent they would gain US$115 billion more revenue — which is three times more than all the public aid spend on Africa together.

To find out why the value addition is done away from the developing countries we have to trace the beans back to their origin.

Back in Uganda, Bernard Wolimbwa and his family are one of 1.3 million coffee farming households in Uganda. In contrary to many other coffee producing countries in the world, the Ugandan farmers can usually live of the money they gain for their hand-picked 'cherries'. The coffee market in Uganda is one of the most liberalised in the world; coffee farmers can sell their products to anyone.

“This means that the market is pretty competitive and farmers get about 80 per cent of the export price for Robusta and 70 per cent for Arabica. This is higher than probably any other coffee producing country in the world”, explains Emma Joynson-Hicks, former director of Café Africa Uganda, in an email interview.

Assuming a current world market price of US$101 per lb Robusta coffee, a farmer could get about US$1.65 per kg.

Bernard and his family benefit a lot from the Ugandan economical system. They own 22 hectares of land, the average harvest is 500 kg per hectare, up to 1,200 kg if it is a rich yield. But still, they would need much more money to process the next step. The majority of the farmers and farmer cooperatives cannot afford mills or other machinery to process the harvested coffee beans. Good quality coffee is even washed, meaning keeping the beans wet and in movement for one to three days, before the beans are roasted — this requires expensive equipment. As a consequence, farmers usually sell the beans directly after the harvest, and because of the absence of transportation possibilities they are dependent on middlemen. Thus, they have to accept lower prices and cannot rely on a stable income. 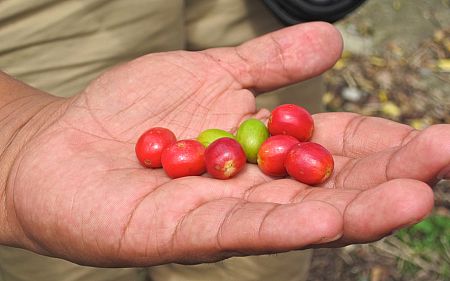 Those Ugandan companies that have the money and the will to produce roasted coffee have to meet new challenges. The roasting process demands much electricity and water. Energy is extremely expensive and is not provided at any time. “Power is often shut off as there isn't enough to go round”, Emma Joynson-Hicks explains: “They call this load shedding.” It is a similar, even if not as complicated, problem with the water supply. Thus, the shortcomings of the Ugandan infrastructure are another contributing factor to the inequality of the coffee trade.

Packed in 60 kg bags, the processed and washed coffee beans continue their journey south. From the ports of Mombasa, Kenya; and Dar es Salaam, Tanzania; they are shipped to other continents, 450 bags per container. About 1,200 containers per year will travel overseas to the coffee-drinking nation of Germany. Analysing the documents of the German Bureau of Statistics, Germany imports green coffee from countries like Uganda for US$3.41 per kilo, but receives US$5.92 when re-exporting the raw commodity and US$8.83 when selling roasted coffee, for example, to the US.

“Often the containers in Mombasa port will be left standing for weeks in the sun because there has been some holdup at the port. East African countries are busy being developed, but it is an ongoing problem.”

Compared to green beans, roasted coffee only has a short shelf life. When explaining why African countries do not export coffee in its roasted form, many experts refer to the long transport time and the characteristics of roasted coffee as the most important reasons. Soluble coffee, the German type that Chris has bought in Sydney, features a longer shelf life than roasted coffee, and that is why it can travel the long distance to Australia without any loss of taste.

The biggest transition point for coffee in the world is Hamburg. When arriving at the destination of the next production stage, some coffee beans are confronted with an entrance fee. According to the documents of the International Coffee Organisation (ICO) there is no taxation on green coffee exports to Germany, but the levy on roasted coffee is 9 per cent — which, again, has an impact on the fact that developing countries only export unprocessed coffee.

For these many reasons, the existing supply chain of coffee production is just a logical consequence, isn’t it?


Geoffrey Bakunda, Ugandan expert for economy, summarises the problem why his country cannot export roasted coffee by stating the most argued point:

“The obvious reason is that there are high costs for coffee processing. The gain would be too low, meaning that if it is produced locally and then exported it would be fairly uncompetitive.”

“Another reason, and the most important one, is the companies that buy coffee. Who buys green coffee? You have European companies from Spain, from Germany, from Italy, they come down to Uganda and buy green coffee from farmers and middlemen. They prefer to export it at a low price to their own firms in Europe.”

Thus, according to Geoffrey Bakunda, western companies are another reason why coffee is mainly roasted in European countries.

One of the main global players in the coffee business is the German company Neumann Coffee Group, which is rather unknown since it does not appear in the final sales market. Just a few years ago, this company was involved in a land grabbing case in Uganda; but land grabbing is not that much of an issue, says Geoffrey Bakunda, and he only knows of only a few cases.

Even if a Ugandan company would actually manage to produce competetive roasted coffee and export it to Europe, they still had to face what John Schluter, director of Café Africa, considers as the most challenging hindrance — entering the market:

“I think the biggest problem that African roasters have is actually the connection to the consumers. It is very difficult to sell products and enter the distribution channels unless you have connections.”

Geoffrey Bakunda, on the other hand, has his own explanation as to why African companies are struggling to distribute their products in Europe:

“Another problem many roasters have to face is the issue of what we call the origin impact. They have this conception in Europe, what comes from Africa is not good enough.”

The reasons for the existing structure of coffee trade are various: African infrastructure and the properties of roasted coffee beans contribute to this issue as well as western coffee companies and European bias.

Thousands of kilometres away from the biggest coffee trading port Hamburg, in Sydney, Chris is happy to have found his favourite German coffee in a local supermarket: Melitta Blue mountain. The product assures “Roasted and packed in Germany”. Some roasted beans get the chance to travel all the way from Germany to Australia, whereas the ones that had been processed in Africa have troubles getting an entry permit to Europe.

But, the alternatives to this 'unfair coffee' are limited. The organisation FairTrade surely pays the farmers a premium and shortens the supply chain so that middlemen become superfluous. Yet, they have an application fee and many independent farms cannot afford these thousands of dollars although they meet or even exceed the FairTrade standards. The best option, at least for the producers, is to buy the coffee at companies that have direct contact to the farmers, like “Crop to Cup” who buys from Bernard Wolimbwa. “Good coffee comes from good people” is not only their motto, but also their whole ethos. Every package or cup of coffee can be traced back to the village it was harvested. The supply chains are short from which the farmers benefit financially.

But, the ones that have the money and are the moving power behind the journeys of the coffee beans are not Tchibo, estimated revenue of US$3.4 billion; Neumann Coffee Group, US$2 billion; or Sara Lee, US$10.7 billion.

The ones that decide who benefits from the coffee trade are the people going shopping in the supermarket, with a superfluity of products, and are considering which product they should spend their money on; 1.5 billion people in western nations — the richest 20 per cent of the world's population. They are in the possession of the power to make the change and ask the question why “Original African Coffee“ is “Made in Germany“. But they do not question. They buy.