After Evan, a category 3 cyclone, hit the South Pacific islands in December, Fijian towns were severely battered and many people were left homeless. More than one month after the catastrophe, a great deal of the damage is still there – both in the land and the minds of the people. Julia Thiemann looks at the human cost of the calamity. 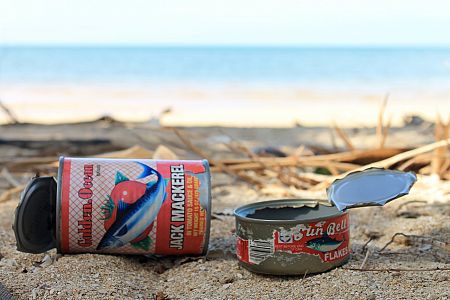 BAHEL comes to beautiful Sawemi Beach every day. Not because of the turquoise water, the white sand, or the fabulous conditions for water sports that attract tourists. He collects rubbish: glass, cans, bottles — everything that he can find. And there is plenty. Local people and tourist alike leave their garbage behind. The rest is washed ashore. It saddens Bahel that the beautiful beach, which is surrounded by coconut palms and bushland, is so polluted. Throwing away pieces of broken glass he says:


“The people don't care. They just leave everything behind.”

But, the rubbish is not the worst thing he worries about. In fact, it helps him survive.


“I collect the rubbish and bring it to the town to get money.”

This is his only income at the moment; his only chance to survive. With the cyclone that hit Fiji last December, Bahel has lost everything. His home ‒ a shelter rather than a house ‒ was destroyed by the storm.

“It's very hard times right now. Very hard,” he repeatedly says, often glancing at the place where his house stood. For the moment, he can stay with a friend. “But not for a long time,” Bahel adds.

Before Cyclone Evan came, the Fijian with Indian roots used to be a farmer:


“I grew many fruits and vegetables. Coconuts, bananas, sugar cane, lettuce, tomatoes. Now everything is gone.”

The storm has destroyed the whole crop. His situation seems hopeless, with a new start impossible. "I don't have money to buy new seeds,” he says, with his eyes getting watery.

Joanne Foster, who was holidaying in Fiji in December when Evan came, reported to the Herald Sun:


"There’s a lot of vegetation strewn around and some palm trees have snapped in half," she said. "There’s a lot of damage and a lot of work to be done. But it’s not as bad here in the resorts with the concrete buildings as it would be in the villages."

In fact, like Bahel, many Fijians live in Bures ‒ traditional palm huts ‒ or in light sheet cottages, which couldn't hold out against the power of the storm. Janet Mason reported to Radio New Zealand that she saw an empty house flying through the air and landing beside hers.

That could have been Bahel's home.

When Evan left, 3,000 people had to move to evacuation shelters. The damage on agriculture alone was accounted for US$ 30 million.

Evan was the strongest cyclone to threaten Fiji in 20 years, with gusts up to 270 kilometres per hour.

The Fijian government, overburdened with taking care of the aftermath, requested international help.

At this stage, however, the farmer Bahel – like many others – hasn't received any financial support.


“I reported to the Council and I had to fill in a formula. But I have heard nothing back.”