Gap between rich and poor widens in developed nations

New report shows trickledown economics doesn’t work, as gap between rich and poor increases across the OECD — and especially in Australia. Pat Garofalo from ThinkProgress reports. 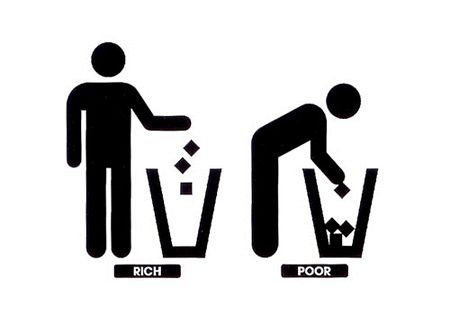 According to a new report by the Organization for Economic Cooperation and Development, income inequality – which sparked the worldwide Occupy Movement – is increasing all across the developed world, led by bankers and executives reaping bigger and bigger income gains. In the OECD countries, the richest 10th of the population makes about nine times as much in average income as the poorest 10th, a significant increase from the gap in the 1980s:

The gap between rich and poor is widening across most developed economies as skilled workers reap more rewards and top executives and bankers benefit from a global job market, the Organization for Economic Cooperation and Development said.

The average income of the richest tenth of the population is now about nine times that of the poorest tenth, the Paris- based OECD said today in a report. The gap has increased about 10 per cent since the mid-1980s. 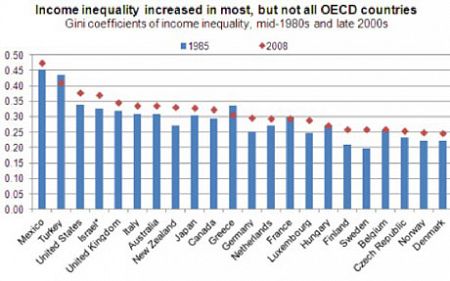 Mexico, the U.S., Israel and the U.K. are among the countries with the biggest divide between rich and poor, while Denmark, Norway, Belgium and the Czech Republic are among those with the smallest gap. The earnings multiple is 14-to-1 in the U.S. and Israel, compared with about 10-to-1 in the U.K., Italy and Japan and 6-to-1 in Germany and Denmark. Australia has the 7th biggest disparity out of the 22 OECD nations.

In the U.S., “the rising incomes of executives and finance professionals account for much of the rising share of top income recipients.” The OECD recommends that the U.S. both increase taxes on high earners and boost benefits for low-income people, which average just 6 per cent of household income in the U.S., compared to 16 per cent across the developed world.


OECD: "Social contract is starting to unravel"; trickle down economics a fallacy

“The social contract is starting to unravel in many countries,” OECD Secretary-General Angel Gurria said in a statement. “This study dispels the assumptions that the benefits of economic growth will automatically trickle down to the disadvantaged and that the greater inequality fosters greater social mobility.”

(This story was published in Truthout on 5 December 2011 and has been republished under a Creative Commons licence.)
FINANCE ECONOMICS gap between rich and poor income inequality Occupy Movement OECD
Recent articles by admin