The top 1% of Australians have more wealth than the bottom 70% combined. 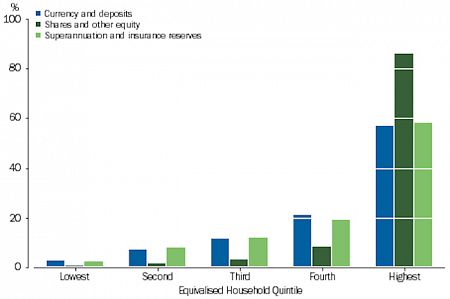 Australia is one of only four OECD countries with a "dividend imputation" system for taxing dividends. We are the only country that refunds excess credits.

Hawke and Keating introduced dividend imputation in 1987. Their version did not refund excess credits. Howard and Costello’s 2001 version does.

How does it work?

Let's say you own all the shares in a company, Marks and Angles, which makes a taxable profit of $100. The company is a big business and so pays tax at 30 cents in the dollar. Because it pays $30 tax on its $100 profit, the company has $70 left after tax. It distributes all its after-tax profit to you, its sole shareholder.

You receive a $70 fully franked dividend. You have no other income but the $70 dividend you have received. You declare the $70 plus the $30 tax paid by the company on it — that is, declare $100 as your assessable income. Assuming you have no costs associated with gaining that income and accepting you have no other income, it means your total taxable income is $100. However, as an individual, you are only taxed on taxable income greater than $18,200. Because you are below this figure, you get the franking credits of $30 as a refund.

A number of retirees who are receiving refunds are below the tax-free threshold of $18,200 taxable income only because they receive a superannuation income stream that is tax-free. This means some very very rich people can receive the refund.

Why the Government doesn’t want you to understand how franking credits work. by The Australia Institute https://t.co/sFjfQGw3Yv

Former BHP executive Don Argus and his wife, for example, claimed $600,000 per annum paid to them from their superannuation fund, tax-free. Their fund had a balance of $15 million. However, unless they structure their affairs very carefully, they are all likely to have other income taking them above the $18,200 tax-free limit, even though their pension income of hundreds of thousands of dollars is specifically exempt from tax.

Of course, the position of Mr and Mrs Argus is outrageous and inequitable. Does it, therefore, follow that Labor’s solution is appropriate?

Not if it catches people who are less well off. Labor messed it up initially by including 306,000 pensioners — hardly rich people. If 12% of pensioners were going to be affected by Labor’s proposal (before the ALP exempted them), will other low-income non-pensioners be affected by the revised version?

There will be a number of people who have followed the urgings of Hawke and Keating and politicians since then, and invested for their retirement.

As Greg Jericho said in The Guardian:

My column today on who is getting dividend tax credits, and the incomes and wealth of households

Are retirees 'hit' by Labor's policy, and what is a wealthy household? | Greg Jericho https://t.co/gqzRjKRph5

The ATO figures for 2015/16 showed that 2.8 million people claimed franking credits. Even accepting that most of them do not claim excess franking credit refunds, that is a huge demographic to upset — especially since as they grew older they will retire and their income will reduce. They may well be much more dependent on franking credit refunds to live on, than those in work.

Are all of these people rich retirees? For those aged between 60 to 64 (that is, retiring or near to it) the average superannuation account balance in 2015-16 for males was $270,000 and for females $157,000. A return of 6% on the first figure gives an income of about $16,420 a year. Hardly rich. They may have set aside some shares in their working life to help them in their retirement and to provide capital gains, over time, readily convertible into cash if needed.

One way to address the issue of rich people getting big refunds of franking credits might be to limit the refund during the pre-retirement stage to individual superannuation accounts with holdings for each person of less than, say, $350,000. Another approach might be to limit the availability of credits to those whose exempt superannuation income is less than the full pension plus supplementary payments, totalling about $23,800 a year. Why should superannuation income, especially that above the $23,800 amount, be tax-free? If it is good enough for pensioners, it is good enough for superannuants.

Superannuation benefits for the ultra-rich are 'obscene' https://t.co/XOt9jXTcr6

Superannuation is a massive, legal tax "rort" and those with the most money take the biggest benefit out of it. According to the 'Tax Expenditure Statement 2017' (p19), the superannuation tax concessions forgo over $39 billion a year in revenue. The cost of the age pension and other income support for seniors is $45 billion.

Changes made by the Coalition Government in 2017, reduce the attractiveness of superannuation for high-income earners, somewhat, but it is still advantageous for them to put as much money as the government limits allow into superannuation.

The 'Cost of Privilege', a 2018 research paper by Per Capita for Anglicare, found that $21 billion of the $36 billion in revenue forgone under the two main superannuation tax concessions went to the top 20% of income earners.

Labor’s other tax changes apply to rental properties or capital gains prospectively. The changes to franking credits will apply to arrangements already in place. Presumably the extra $5 billion a year the franking credit changes will provide was too great a temptation for Labor to ignore — especially if it can paint this as a "taxing the rich" exercise — which in part it is, but in part is not.

Labor says it will use the money to fund schools and hospitals. Australia is a low tax, low government-spending country. Labor has been a key player in keeping Government spending low. The fact the ALP now says it will spend the extra $5 billion from the franking credit reforms on schools and hospitals should be met with the question, why not spend much more on these vital public services?

Let’s not focus only on rich individuals. The banks have escaped the Royal Commission with nothing but a gentle rebuke. For them, it will be business as usual. By their greed and deception, the banks are making billions of dollars out of us. A super profits tax on them – and any other businesses making such profits – or economic rent would raise tens of billions to spend on public health, education and transport.

If we did tax super profits, the government would also need to impose price controls on those businesses affected. Otherwise, they would recoup the tax from us — their customers.

A new wealth tax in Australia – such as estate and gift duties on those holding more than $5 million – would capture billions. So, too, would a small percentage tax on the $500 billion or so gross income of the 722 big businesses that pay no income tax in Australia.

People with a mindset of scarcity, no matter how much money they have, never feel that they have enough and that invariably causes them to steal from the poor. Full reflection here: https://t.co/eV8h0LntFN #FrankingCredits #Auspol pic.twitter.com/6mQ83GACTx