EXCLUSIVE: Dominique Grubisa’s “asset protection”: How does she sleep?

Sydney solicitor Dominique Grubisa tells her students she can offer them lifetime asset protection, but the facts suggest otherwise. Another eye-popping addition to David Donovan’s outstanding investigation into this dubious lawyer.

In that article, IA referred to claims by Mrs Grubisa that her “Master Wealth Control” product is not:

However, IA has significant material which suggests both of the above contentions are false. Over the past ten years, Mrs Grubisa has promoted her product through direct sources and third-party seminars. Third parties that have promoted her seminars include Zadel Property Education and Global1 Enterprise Pty Ltd.

In a Youtube clip promoting a seminar with Global1 in 2016, Mrs Grubisa spoke of how what she was seeing in the world was really scaring her. Consequently, she said, she had made it her mission to get to as many Australians as possible to “tell them what’s going on with governments and Reserve Banks, Australia wide and globally”.

With what lies ahead, she claimed:

“… superannuation may not be safe. Everything you’ve worked hard for could be withered away.”

Global1 Training was involved in investment seminars used by notorious spruikers Henry Kaye, Rowan Burn and Jamie McIntyre to promote certain land banking schemes. These schemes became the subject of a Senate inquiry by its Economics Committee, following a referral from the Senate on 4 September 2014.

Greg Klopper, who was the managing director of Global1 Training and who declined the Committee’s invitation to appear before a hearing has worked in Grubisa’s business for some years.

In that seminar, Dominique Grubisa said she could protect her students [IA emphasis]:

... I can build a force field around what you have today, but what about when you're buying and selling assets, and as your position changes? This was a bit of a pointy end of a dilemma for me because, as you know, with lawyers, we have professional indemnity insurance.

So, if I say I've got your back” – I say, “you will never, ever lose and this is rock bottom” – I have to stand behind that.

And the way most lawyers operate is they time charge. If you've ever used a lawyer before, you'll know they're expensive buggers. Six-minute units of billable hours.

Mrs Grubisa went on to say her protection guarantee was a lifetime one, come what may:

… what bothered me is, yes, I can protect what you have now, today.

When that changes, if you don't come back to me, then any new assets are going to be exposed and then I haven't got your back as I promised.

So you will never, ever, see this from any other lawyer anywhere, I warrant, in Australia or even the world, but this is underwritten for unlimited changes and amendments for your lifetime.

She said that on her “team honour” protecting her students was her “life’s work” and “higher purpose”:

Now you may already be thinking, "well Dominique, how old are you? What if you die before me? What happens there? …. Whose life are we talking about here?"

It’s your lifetime, so this is my higher purpose. This is my life's work. I actually have a testamentary trust. And part of that, the provision is that my work continues when I'm gone.

My team honour, unlimited amendments, updates, change for your lifetime. 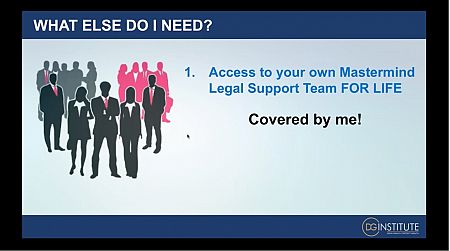 Dominique Grubisa went on to say her professional indemnity insurance as a solicitor underwrites her students:

"I cannot cut and paste and do some of this and no other parts. So if I work with you and if it's my professional indemnity insurance as a solicitor on the line, underwriting you, then I want you warts and all. I don't want to do some of it and leave you exposed."

Remarkably, Mrs Grubisa also claimed in that seminar that she does not offer this product to the general public, even though her website clearly states the opposite. As, in fact, do the many seminars conducted by Dominique Grubisa over many years spruiking this product.

For instance, in a welcome video for students of her course, she says:

So my duty is to you as a client. So if you have your assets, I will protect those. And I'm looking out for your best interests.

If you merge your assets with someone else and then something happens or something goes wrong and we have to extricate you, it's a lot harder.

It's simple to protect you. You and your spouse, you and your child or sibling, or somebody else. Once you extend it to an extended family and friend network, there may be a conflict of interest.

My duty to you as a lawyer is to protect your interests. 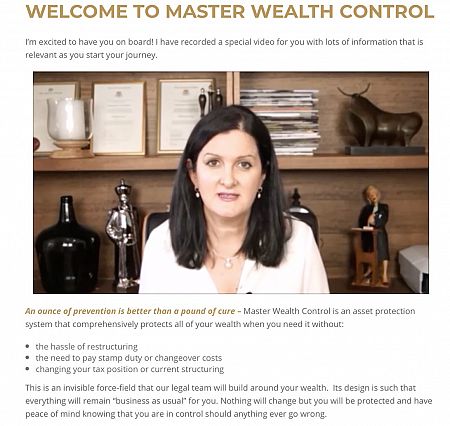 Despite all this puff, according to Dominique Grubisa’s response to the NSW Law Society, her program is not sold as a legal service.

Just as remarkably, Grubisa’s Facebook advertising still refers to protecting superannuation funds, despite a very clear response from the ATO regarding such advice, as referred to in IA's 8 February article. 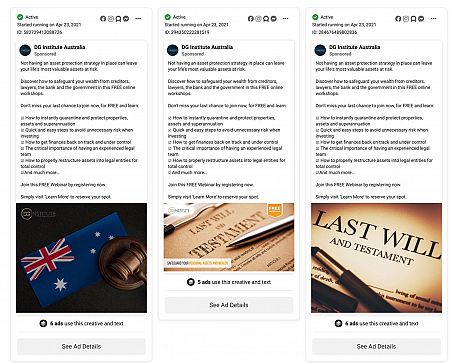 The Facebook ads encourage people not to miss their “last chance” to join the webinar for free. In the video on the link where potential attendees are taken, Dominique Grubisa says she does not know how long the “master class will be available for” and not to delay or they may “miss out”.

Mrs Grubisa said in a 17 November 2020 Facebook post that she was reading Professor Robert Cialdini’s bestselling 2009 guide, Influence: The Psychology of Persuasion.

Chapter Seven of Cialdini’s book is dedicated to the use of scarcity in the art of persuasion.

‘… be careful. Never use fake scarcity…. Your site visitors will see right through you.’

Sound advice — and not fake, as so many of Dominique Grubisa’s claims allegedly are.