SUBSCRIBE   DONATE LOGIN SHOP
SUBSCRIBE   DONATE
How we prevented a Morrison dictatorship
How Howard screwed the Libs
U.S. site tries to ruin what makes fairy bread great
Bloody Idiot of the Week — Episode 28: Get used to it
Morrison's 'politics of retribution'
Finance News

Dominique Grubisa, the lawyer who makes millions advising her students to seek out “distressed assets”, also claims to be able to protect assets from lawyers, the government and creditors.

In spruiking her "Master Wealth Control" product Mrs Grubisa makes extraordinary claims about how her clients can never go backwards, never lose a cent, bite off more than they "can chew and chew like crazy".

One of the claims made by Mrs Grubisa is that she can protect the assets of self-managed superannuation funds (SMSFs) from being claimed by the government.

In documents provided to her students Mrs Grubisa claims that:

‘The government does not like SMSF’s as they lose control when it is privately owned – it is much easier for them to legislate and dictate over fund managers and skim that way (if that is their strategy). With a SMSF having funds tied up in its own assets it will be harder to legislate in respect of any mandatory acquisition or levy.’

She goes on to suggest:

‘As an additional layer of protection where you own a SMSF, we can mortgage the fund and/or its assets to the Vestey Trust.’

Mrs Grubisa’s idea of a “Vestey Trust” is, in essence, a form of discretionary trust she claims establishes a “friendly creditor”:

‘The Vestey trust system works by establishing a “friendly creditor” in the form of a special trust that owns the additional equity in your assets. A caveat is placed on the property title directing that the trust owns any equity beyond the loan amount. Because the caveat is placed on the title when times are good, it takes priority over subsequent claims by liquidators in times of distress.’

Dominique Grubisa claims in her Master Wealth Control webinars that no money needs to change hands. However, this is at odds with advice provided by Grubisa’s company to a client whose business had run into financial difficulty and the owner went into bankruptcy.

When a so-called “Vestey Trust” established by one of her alumi was tested by a bankruptcy trustee, Mrs Grubisa’s company appeared to repudiate its own advice.

From a 2 December 2019 email from DG Institute to the bankrupt:

‘The trustee [in bankruptcy] can ask your [Vestey Trust] trustee to verify the equitable mortgage debt by producing the trust bank account statements. If there are records, that’s easy, but if you haven't kept any records, the trustee will disallow the debt as a claim.’ 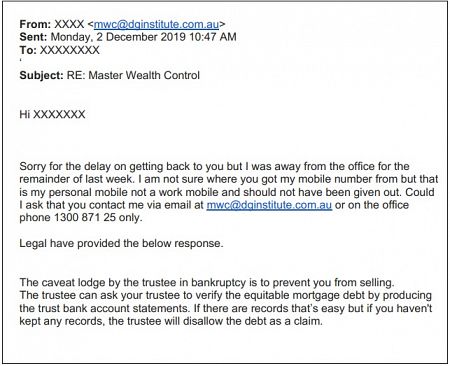 Or in other words, if there is no actual debt, there can be no “friendly creditor” and, therefore, no protection against unfriendly ones.

THE REAL-LIFE VESTEYS AND THEIR TRUST

Grubisa claims her product is based on a trust set up by the parvenu Vestey Family — one of Britain’s wealthiest families in the last century, as well as one of Australia’s largest landholders. Originally butchers, the Vestey brothers William and Edmund made their fortunes pioneering the shipping of chilled beef and avoiding tax (more about that below). They were also the employers involved in the famous Wave Hill walkoff in the Northern Territory, where Indigenous stockmen went on strike in order to receive gain fair pay, rather than shreds of tea and tobacco, as the Vesteys insisted.

The struggle for equal rights has been a hard and tortuous one for Indigenous Australians. Until 1968, they were not even entitled to equal pay. David Donovan reflects.

For their efforts, along with a £20,000 gift to David Lloyd George, William was granted an hereditary peerage and Edmund a baronetcy.

Generous of Great Britain, considering the brothers were domiciled in Argentina and paid virtually no tax. The Vesteys’ tax avoidance related to the extent to which profits of a Paris-based trust they set up in the 1920s, for which the documentation was kept in Uruguay, were assessable to income tax in their native land.

“Trying to come to grips with the Vesteys over tax is like trying to squeeze a rice pudding."

In 1980, the Vesteys faced public outrage after a Financial Times investigation found the family was indeed operating a massive tax avoidance scheme.

Undeterred, the grandson of Sir Edmund, also an Edmund, remarked:

"Let's face it. Nobody pays more tax than they have to. We're all tax dodgers aren't we?"

Britain eventually closed the tax loophole in 1991. By 1999, the once second richest family in the UK had fallen to 150th and was said to only be worth a trifling £650 million or so.

GRUBISA'S “VESTEY TRUST” AND THE REGULATORS

That Dominique Grubisa claims a connection between her product and the Vestey trust, is interesting. Especially given the loophole once utilised by the Vesteys does not exist under Australian legislation.

Mrs Grubisa says in her Master Wealth Control webinar that she held her magnifying glass really still and had to go over 100 years of case law to find the answer of how to get control.

She further claims the British Government were furious when the Vestey brothers set up their trust and that they said:

However, the issues in the Vestey cases concerned the extent to which profits of the trust paid in the form of loans to beneficiaries in the UK were assessable to income tax under British tax law. That this income was for several decades not subject to tax in the UK would seem to have no connection to the asset protection claims made by self-professed legal maven, Dominique Grubsia.

Indeed, in response to a query raised by one of Grubisa's clients, the ATO confirmed that the arrangements were in breach of the law:

‘While the assets in your superannuation fund are technically protected, if you have significant cash investments (eg term deposits or bank accounts) in your SMSF, then for maximum protection, you can transfer the cash to a bank account in the name of Trust.’

Again, the ATO has confirmed this would breach superannuation legislation.

In November 2019, multiple complaints were lodged with the Tax Practitioners Board (TPB) about the advice given by Grubisa's company Master Wealth Control Pty Ltd — which does not appear on the TPB register of registered tax agents or tax advisers (financial). Despite concerns being raised by a staff member of the TPB, which led to it being promptly escalated, the matter had yet to be allocated a case manager by December 2020.

In other correspondence from the NSW Law Society, the Law Society says that Mrs Grubisa also claims that the asset protection product (which includes drafting of a will, mortgage, trust deed and other documents), ‘is not a product or service provided by her or DGI Lawyers as legal representatives’. 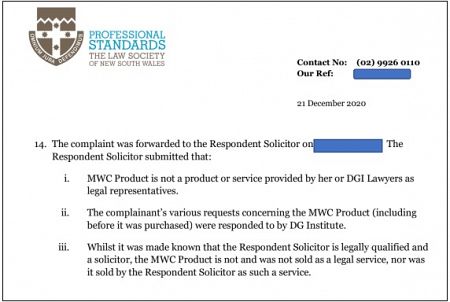 That is directly at odds with claims made by Mrs Grubisa on her website regarding the asset protection product.

On the page promoting the system, the product is described as a '"Done-For-You" Lifetime Legal Service'. Potential clients are told that ‘Dominique and her legal team will prepare legal documents for you’, and that those who purchase the product will receive ‘personalised legal advice’ for their current wealth situation and future goals. 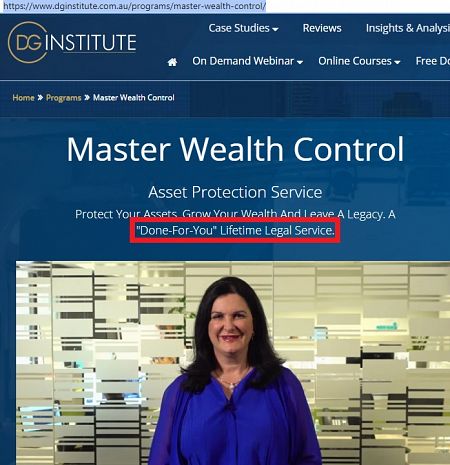 In a recent post on the Property Chat website, an accountant and superannuation adviser suggested the following:

I read some promoter SMSF documentation (advice) issued relevant to the Vestey Trust as noted above and it may even be the same document on letterhead. It's appalling. If a solicitor issues that they should not be allowed to practice.

It defies superannuation law including SIS [Superannuation Industry (Supervision)] Act [1993], SIS Reg[ulation]s [1994], Corporations regulation, and is unlicensed and blatantly false financial and legal "advice". Nobody should act on that advice to have a SMSF involved with that trust.

I have recommended that the ATO Assistant Commissioner of Super John Ford be advised on this practice so the SMSF Regulator —the ATO, can issue warnings. I trust they will also consider issue of s264 notices to identify all parties involved. The penalties could be as much as 45 [per cent] of the amounts in super and more.

Independent Australia is neither a financial or legal adviser, however when it comes to claims made by Dominique Grubisa in her seminars on the Vestey Trust – and, indeed, other such matters – we would suggest the prudent approach is to seek further advice from well-qualified professionals.

Independent Australia founder and director David Donovan is also a qualified accountant. You can follow Dave on Twitter @davrosz.

My latest article on the new Kathy Jackson, Dominique Grubisa, is about to drop in the next hour or so.
Before then, catch up on my two previous investigations on this subject.
Here -> https://t.co/WBpRgDC6JO
And here -> https://t.co/2s2GQRuuB6