SUBSCRIBE   DONATE LOGIN SHOP
SUBSCRIBE   DONATE
How we prevented a Morrison dictatorship
How Howard screwed the Libs
U.S. site tries to ruin what makes fairy bread great
Bloody Idiot of the Week — Episode 28: Get used to it
Morrison's 'politics of retribution'
Business News

Dominique Grubisa is continuing to spruik her services despite criticism from legal professionals and scathing client reviews, reports David Donovan.

The issue has been picked up by mainstream media organisations including articles by Richard Baker in the Sydney Morning Herald and The Age newspapers, interviews on 4BC radio and a segment on A Current Affair.

Grubisa tells her potential clients that by signing up to her “Master Wealth Control” program, they can “never ever lose” and never go backwards.

Grubisa is aware that other lawyers have raised real concerns about her claims and that numerous of her former clients have made complaints to regulators.

In a seminar held in September 2021, the video of which is on the website of DG Institute, Grubisa addressed some questions she said were often asked by her clients.

Session 1 of the seminar was entitled ‘Are You Proteccted’ [sic].

One common question that Grubisa said was asked was whether the “protecction” will work, in the context of the student’s lawyer or accountant saying no, it won’t. 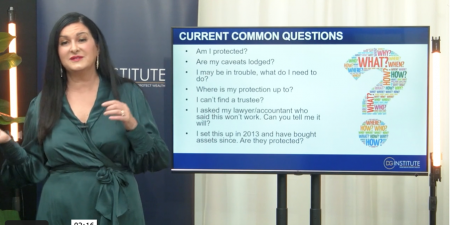 “I asked my lawyer and accountant if this was all right. And they said, no, they don't know. They don't understand. Very, very common. This is very niche and that's why we're here. We’re your one-stop-shop for all your needs to do with this. No disrespect to your other experts. They just won't know. And you are the captain of all your troops. You are the general in charge of where you're heading with your strategies, with your wealth.”

Grubisa doesn’t seem to like other lawyers reviewing what she claims.

During a webinar held in early 2012, Grubisa said the following:

The only way I am currently offering this whole asset protection package is basically forever for life, so you have me now on your team for whatever you do going forward, for no extra price.

Now that's, I guess, that's my loss in a way, but I could not think of any other way to protect my intellectual property and serve you. So, you probably won't be able to go to another solicitor and say, ‘Look, this is what's happened. And this barrister set all this up for me and now I want to buy another property.’

They'll just say, ‘Well, I don't understand this’ or, you know, they'll have to talk to me and I don't really want to explain it. 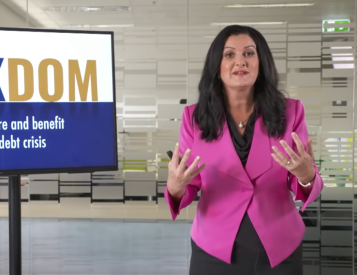 Remarkably, despite promoting the asset protection product as a done for you, lifetime legal service – as we reported in February last year – Grubisa told the NSW Law Society that the Master Wealth Control product is actually not a product or service provided by her or DGI Lawyers as legal representatives and that it is not sold as a legal service, nor sold by her as such.

That doesn’t sit too well with those of her clients, who heard the exact opposite.

Following are some of Grubisa’s claims made in seminars (transcribed from audio files):

There are no ongoing fees or charges from me. So this is one-stop-shop. You won't get this anywhere else from a lawyer. They have billable hours. But for me in this situation, this is a flat fixed fee for holistic protection for life.

So, I don't trade time for money like a normal lawyer with billable hours. This is my mission. This is my passion. And I do this for like-minded people who want to control their wealth. And this is the only way that I do it.

Now you will never, ever get this from any other lawyer, because this is like me signing a blank cheque for you. But what I will give you as part of this is unlimited updates for life.

I cannot cut and paste and do some of this and not other parts. So, if I work with you and if it's my professional indemnity insurance as a solicitor on the line, underwriting you...

So, my duty is to you as a client. So, if you have your assets, I will protect those. My duty to you as a lawyer is to protect your interests. 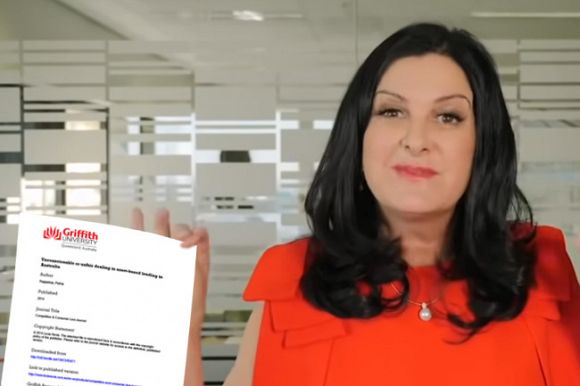 This self-proclaimed expert is quite disparaging when it comes to her views on other lawyers:

I know when I first started in law, I was hyper-critical. I'm kind of like a perfectionist in the sense that what's worth doing, it's worth doing well. You know, how you do anything is how you do everything.

And I was always shocked and stunned at how there were varying degrees of competence in the legal profession ─ not naming names and not being nasty.

Sometimes judges didn't know stuff. And that just blew me away, because I always assumed that someone higher or older, been at it longer and more senior to me, would be better and know more than me.

Grubisa’s criticism of others is apparent in her other writings.

In her book, How To Cope When the Sky is Falling (available through Amazon for 99 cents), referring to a supposed quote from a spokesperson from Legal Aid in Queensland, Grubisa says [pp48-49]:

‘With the greatest of respect, if these “experts” were really any good in their chosen area, that is financial and legal gurus, they wouldn’t be doing the jobs they’re doing! If you want to be successful, make sure you take advice from successful people.’ 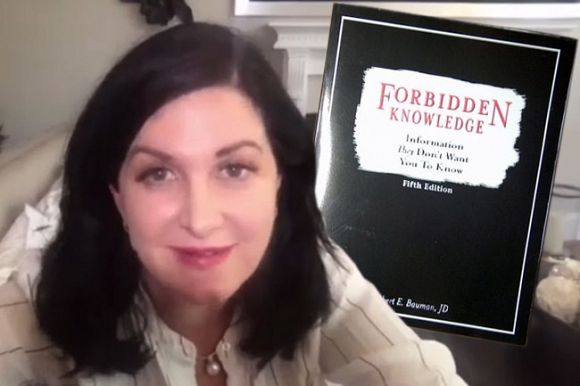 A self-help booklet written by self-professed finance and law maven Dominique Grubisa bears more than a striking resemblance to a book written in 2010.

Dominique doesn’t lack confidence when it comes to her own skills, telling potential clients:

Unfortunately, your lawyer or your accountant won't be able to do this. They won't know this. No disrespect to them. But if they're on your team, I'm not saying sack everyone. I'm saying I'm another expert on your team. My role is, I'm there for your protection. So, I commonly work with your other professionals. I call people's accountants and work in with their overarching strategy. My job there, though, is to have that force field around you and have your back so you don't lose. I'm the most valuable player on your team because, again, it's about what you keep.

Despite all the media coverage, Grubisa is still promoting and selling her product and still making quite remarkable claims. Grubisa tells her clients that by granting an unregistered mortgage noted by a caveat, all of the equity in their property is soaked up, so there is nothing for creditors to get.

What is very concerning is that her clients believe that their assets are protected by the strategies she promotes.

Amanda Bennetts, referred to in our recent article, said in a video from DG Institute used in promoting the Business Turnaround Program [at 13mins 45 seconds]:

There’s no risk to me personally at all. And that was my biggest worry. I don’t know if I can go off; a little different tangent here but, um, I came to one of your events last year – November – and I really wanted to start the businesses, but I was scared about running businesses – I’ve been a part of businesses before – about losing my home, losing my investment properties. Doing all that.

Anyway I watched one of your events, a few... oh, months; June... and it was... it had the wealth (Dominique Grubisa: Master Wealth Control, the asset protection) Master Wealth Control, yeah, that’s the name of it. The one with the Vestey trust. And when I learnt that I could protect everything I’ve got; there’s no risk to my home. There’s no risk to anything else. I went, ‘I can do this now’.

“That made the big difference to me, because, you know things are risky for everybody in this day and age, and it’s really scary to lose, you know, where you kids live and all that sort of stuff.  So, getting the Vestey trust set up, meant that I can then... I can do this without losing everything.” 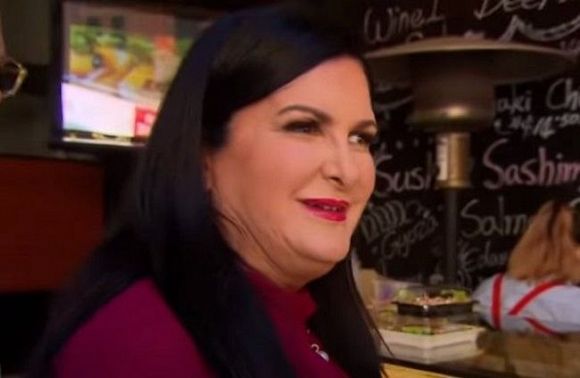 As we reported last February, Grubisa’s claims that no money needs to change hands is at odds with advice given by Grubisa’s legal team to a client who became bankrupt. It’s also at odds with advice “sbbamber” says they were given, referred to in a negative review of DG Institute on the Product Review website, posted in June 2021. Bamber says their matter was referred to the NSW Legal Services Commission.

Even if loans are made, clawback provisions such as sections 120 and 121 of the Bankruptcy Act and state legislation such as the Conveyancing Act can come into play.

we have to ask: when will legal and other regulators decide to take action in this matter in order to protect consumers?

Meanwhile, Mrs Grubisa is back spruiking her supposed asset protection product to the public again in a webinar to be held on Saturday 5 March 2022, which is being heavily promoted through Facebook advertisements.

Three reasons to feel cheerful — about being an Australian since May

4 August 2022, 4:00pm Despite numerous reports to the contrary, the new Albanese Government has made ...

2 March 2022, 11:00am Dominique Grubisa is continuing to spruik her services despite criticism from legal ...

EDITORIAL: Why the Right give the top jobs to the wrong people