The expansion of public media is being messed with by big business and rightwing “friends” of the Turnbull Government, say media experts. Dr Lee Duffield reports.

MEDIA COMMENTATOR Margaret Simons told an ABC Friends forum on the weekend the national broadcaster would have to save itself by making radical changes, while handling more budget cuts.

The keynote speech by Associate Professor Simons reflected the anxiety of the audience – mostly reflecting the ABC’s strongest, 55-plus demographic – that the organisation’s proven adaptability would be overtaken by hostile conservative politics.

COMING CHANGES IN THE ABC

Current interest in the politics of media is focused on changes forecast for the coming month by Michelle Guthrie, the ABC managing director, appointed in May 2016.

Simons said these were expected to follow the logic of the multi-platform media landscape by re-matching organisational structures of the ABC to content, so it would be clustered according to genre, or type of service, rather than as radio, television or other.

A focus on spending more, directly, on programs, and less on organisational costs had already been well foreshadowed.

A part would be the drive to extend audience reach, especially via new media taking in younger people, with some firm goals, like 85 per cent of the available audience by 2020.

However, all that would take much multi-path manoeuvring; to continue to innovate in areas like outsourcing material (where the ABC, as a player in many markets, was toughening its guard on its intellectual property); while at the same time both retaining its present audience demographics and extending new ones.

That would be tough enough since, according to Simons, changes to date were not getting there:

“Increasingly people turning up to appointment television are over 50 and take-up of the ABC’s new platforms used by younger audiences is not sufficient to make up for losses on the ‘main’ outlets." 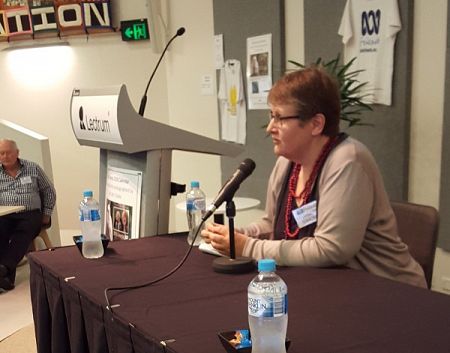 The problem moved from difficult to dangerous for the ABC because of the squeeze on funds, with no "magic pudding" to provide for expansion, and already a drain of job cuts and politically-driven funding attacks from government.

There was no option for loyalists of public media to resist change, “it is the direction of change which is at issue,” said Simons.

If the ABC did not succeed with its changes, especially in reaching to more audiences, “governments will cut its funding and it will have few friends in the future”, she said.

Long-accepted reasons for having a strong public media sector continued: diversity of ownership and control, good public support including audience support (for example, the ABC is second-placed in highly-competitive online ratings), track-record in innovation, a linked path-finding of services (such as starting off Australian cricket broadcasting and, later, women’s sports broadcasting) and stepping in where commercial services could not deliver – their widespread market failure.

The ABC Charter sets out rules for fairness; the organisation has long standing practices to give access and balance. Yet fresh attacks have come on against the ABC this year from the political rightwing, in two parts.

Newspapers in the Murdoch group (with others, like Fairfax, starting to join in) have intensified demands for protection from public media, which they started when radio began in the 1920s — this time wanting to be given the ABC’s market share because their own business model, in the face of new media, has gone wrong. Part of it is to get up instances of perceived left bias, in their reportage, to show to conservative politicians. Commercial broadcast media have already received a bone with the cancellation of licensing fees, once a hundred-millions gateway to even greater riches from advertising.

The Turnbull Government has set up yet another inquiry into the ABC, responding to a demand from the One Nation party, in exchange for some votes in the Senate. All part of the pressure.

The ABC Friends movement has a long history of mobilising the support of audience members for the defence of the organisation, the Australian Broadcasting Corporation, against a history of attacks on its existence, usually from conservative governments, coming under pressure from some of their constituent parts. The Friends, who met this time in Sydney, have links everywhere, including the regions, which are vital in such conflicts; they have traded on well-connectedness, credibility and disinterestedness, and well-worn political expertise.

This new test is a hard one — a war on three fronts, dealing with the already-eroded resources. Demands of new technologies, new media platforms and new audience configurations. The renewed attack by rattled conservative forces, getting spooked by market failure in the commercial media sector, noticing stubborn lukewarm voter support on the right wing, wanting to place some blame.

Long-term ABC staff member and now staff elected member of the ABC Board Matt Peacock told the Sydney gathering the new investigation into the ABC, to be conducted by the Productivity Commission, could be most problematic for it:

“It is a real worry; we will wait to see the terms of reference; the devil might be in the detail."

Another former ABC journalist, Graeme Dobell, from the Australian Strategic Policy Institute, highlighted the costs of both trying to save money and satisfy clients old and new — deploring false economies achieved through withdrawing short-wave radio services.

Those had left Australians in remote areas without a vital connection to the world outside – at best, very hard to replace – and had greatly undermined Australian interests in the Asia-Pacific, especially where it used to have strong short-wave audiences in Papua New Guinea and the South Pacific islands.

“It was dumb," said Dobel. “The ABC was an extraordinary piece of Australia’s soft power.”