Christopher Monckton to turn National Press Club into a circus

Senior correspondent Barry Everingham says the National Press Club is turning itself into a circus by inviting Christopher Monckton to speak. 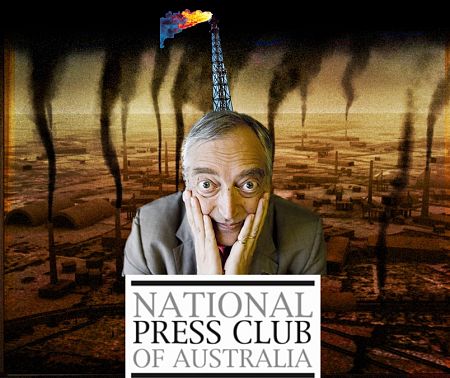 My eyes almost popped out of my head when I read in today’s The Australianthat Lord Monckton has been invited to address the National Press Club.

Now Lord Monckton might have an international profile, but he’s in Australia to join in the global warming debate, which is his right as well as that of those who agree with him.

However, his behaviour while he was on his way here and since he arrived does not make him any more interesting, does not augur well for any new statements from him, and given the usual good grace of the media members of the prestigious National Press Club he will no doubt be spared the questioning he so richly deserves.

For instance, will he be questioned on his views on the cure of AIDS?

His Lordship wants the entire population screened to identify the carriers of the dreaded disease who would, under his plan, be quarantined for life. As though that isn’t bizarre enough, he would have the remainder of the population blood tested every month and all those found infected by the virus, even if as only as carriers, isolated compulsorily, immediately and permanently.

And what about his claim that he is a member of the august House of Lords, which in another day and age he could have been.

A measure of how he is regarded by the British voting public can be gauged by his abortive efforts to stand for four by-elections for vacant seats among the 92 hereditary peers remaining in the House of Lords after the electoral reforms.

He bears an uncanny political resemblance to that other serial seat contender, our very own Pauline Hanson.

As well as being a climate sceptic, Monkton doesn’t have much time for the European Union. He crazily sued the Major Government for agreeing to contribute to the costs of the Protocol on Social Policy. His case laughed out of the Scottish Court of Session in 1994 for “want of relevancy.”

Back to his current barnstorming of Australia, which is being funded by Gina Rinehart.

Clubs in Melbourne, Adelaide, Brisbane and Perth will not let him through their doors.

And why is this?

He heaped scorn of the distinguished Australian Ross Garnaut accusing him of having “fascist” views.

He, of course, later apologised.

A measure of Monckton’s toxicity is that even Tony Abbott keeps him at a distance.

Lord Monckton is hitting out at the clubs who have blackballed him saying it is a mark of naked fear “…on the part of the people who had arrogantly decided to politicise science and have now discovered that the truth is truth whether they like it or not”.

The Press Club’s senior vice president Steve Lewis says the role of the club was to “provide a civilised forum for an important debate”.

Monckton will, if the appearance goes ahead, debate the issue with economist Dr Richard Denniss.

Monckton has disgraced himself by labelling Australia as a country where everyone got a fair go.

“Clearly that is no longer the case,” he said.

The National Press Club is not a circus; subsequently it should never allow clowns to use it as a forum and should join the long list of clubs who will not have a bar of Lord Monckton.
MEDIA ENVIRONMENT AIDS Barry Everingham Christopher Monckton climate change climate change deniers EU Gina Rinehart Gina Rineheart global warming HIV
Recent articles by Barry Everingham