If you are going to the local chemist to get a prescription filled, best to get a quote first, says David Donovan. 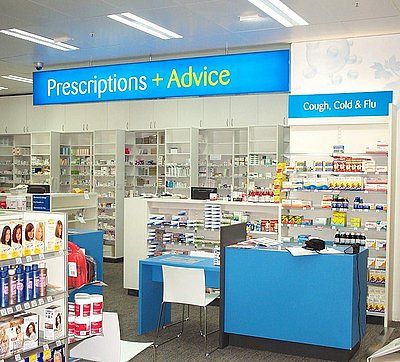 A couple of weeks ago, I went to fill my regular prescription for a common non-serious condition. Without divulging the name of the drug, according to my doctor, it is commonly used and readily available practically everywhere.

Anyway, because I was running short of time after doing the groceries, I dropped into to the Amcal Chemist at the shopping centre rather than stopping off at the bulk pharmacy – Chemist Warehouse – down the road as I usually would.

Amcal was a pleasant place to shop—brightly lit, tidily laid out, with numerous attentive staff eager to attend to my order.

At Chemist Warehouse, my prescription costs $63 a packet to fill. Yet when I was called to the counter to pick up the script from Amcal, they were asking for $115 for the same item. In other words, Amcal were charging just a smidgen under twice as much.

After a small heart-attack – I am just a struggling writer, after all – I politely mentioned the radical difference in prices to the lady at the counter. She was extremely helpful, and said that the store would price match if I could prove what I was saying and they could afford to match the price.

So, a few days later, after buying more groceries, I popped into Amcal again to follow up. I handed over the the old packet and the new one – both of which had the prices clearly marked (see illustration below) – and then the lady at the counter went back and spoke to the young female pharmacist. She nodded, took the packets, went to the stock cupboard for a while before meandering over to the mezzanine pharmacists floor at the back and peering intently into a folder. 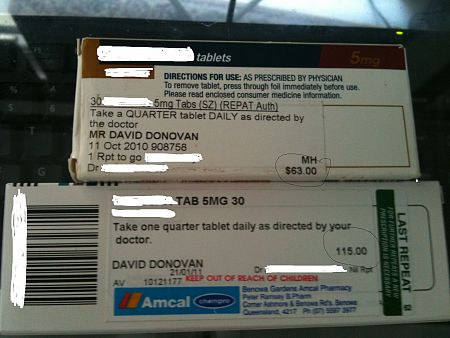 Eventually, the young pharmacist came down and called me over to the counter.

"We have some bad news for you, Mr Donovan," she said. "I'm afraid this store will be unable to price match that item."

"Because we simply can't afford to. You see, each packet costs us $87—we would be making a loss if we offered it to you for $63," she replied, quite apologetically.

"Then how do Chemist Warehouse afford to sell it for $63 a packet?"

The pharmacist looked meaningfully at me over her glasses, "I really have no idea," she finally replied.

I walked away, baffled, out of pocket, pondering the issue. Why was Amcal twice as expensive for the same item?

The Chemist Warehouse product is made by Sandoz, a generic manufacturer, whilst the Amcal product was made by the original manufacturer, Merck Sharp and Dohme. (I had in fact asked for the generic product from Amcal, so I can only assume they don't stock it.)

I guess this might might explain a small amount of the difference, but in a competitive market, it is impossible to believe a generic product could be worth only half as much as one made by the original patent holder. The chemical constituents, as regulated by the Australian Therapeutic Drugs Administration, need to be match certain standards, which means that the products are, for all intents and purposes, entirely identical.

Now, don't get me wrong, I can't and I'm not claiming that Amcal are always more expensive than Chemist Warehouse. I have only my own limited experience with this prescription to go by and I readily accept that it may be that for other products, Amcal are in fact cheaper than Chemist Warehouse. I don't know about that and I'm making no sweeping claims in that regard at all.

What I am saying is that in the market for prescription drugs in Australia, let the buyer beware. Before getting a costly prescription filled, it behooves one to shop around. If you don't, you might find yourself paying twice as much in one place than another for the same item. Who can afford that?

Have you been price gouged recently? Independent Australia would like to know. Please send your stories or concerns to editor@independentaustralia.net.
BUSINESS CONSUMERS business David Donovan
Recent articles by