ONE OF THE ODD revelations from Dr Tim Dunlop’s recent article surveying certain prominent Australian journalists on public dissatisfaction was how little people in the media understand their audiences.

But not only that, how little they respect – especially when it comes to Twitter − their readers' understanding, knowledge and potential expertise.

It is as if journalism is an arcane art and the grubby hoi polloi couldn’t possibly have any relevant contribution to the godly purveyors of this mystical magic.

It’s nonsense, of course ─ as you already well know, having proven your insight and intelligence by being a reader of this publication.

As we reported last week, one reporter for Nine’s The Age, neatly expressed the unconcealed contempt many mainstream media journalists hold towards the heckling mob:

‘I see a lot of non-journos ... have absolutely zero appreciation or handle on the machinery of clusterfuck.’

Please read that IA article now – if you haven’t already done so – and stand in limp befuddlement at the definitions of journalism proffered by prominent industry experts. 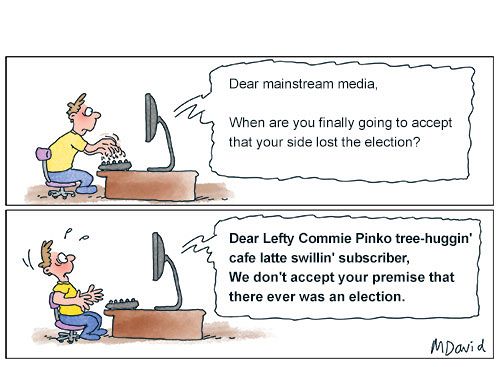 Australia’s media is back-snapped broken — but don’t expect the most concentrated media industry in the world to fix itself!

As mentioned, last week's IA article was based on Dr Dunlop's survey of prominent media educators and working journalists, who were all asked to comment on the following:

‘What is the key thing you think non-journalists don’t understand about journalism? The thing they get most wrong?’

But rather than providing any meaningful insights about their audience, the responses read – with one or two notable exceptions – as an inadvertently damning indictment of their trade, at least as it is practised in this country.

We have grouped their responses into four categories.

1. WE THINK PEOPLE CARE WHO WE TALK TO, NOT WHO CONTROLS US

Through his self-aggrandising comments in the Dunlop article, Alan Sunderland illustrated our point perfectly:

Political journalists who cultivate appropriately broad contacts across the political divide will often know more about what is happening than the average backbencher. Far from being “captured” by their sources, they will be able to piece together what's happening better than most.

As a gallery journalist myself, I recall hitting the phones during a leadership challenge and the politicians I rang were as interested in pumping me for information on what I was hearing as in telling me what their view was.

It seems that not only was Alan “captured”, but he was also “pumped” for information by his sources.

Professor Margaret Simons seemed to agree with Alan’s idea that:

‘… Most non-journalists don't grasp the role of off-the-record conversations and background briefings. When they hear that such things happen, they think its corrupt, which it can be, and to be fair, journos don't think enough about it either.’

On the contrary, most non-journalists grasp this concept perfectly. The well-known quid pro quo between journalists and their sources, who are drip-fed leaks in exchange for writing a certain number of puff pieces and certainly no articles that ever really burn their source. It is to this sort of sly transactional journalism, obvious to most close observers of the mainstream media, that the “uninformed” masses object.

Interestingly, it’s an unidentified Sky News source of Dunlop's that paints the most damning picture of the media’s chummy relationship with power:

I keep telling people the press gallery and the pollies have a symbiotic relationship. They need each other. They feed each other. I saw it all the time at Sky. Get on air, duke it out, then off to the boardroom for collegiate drinks.

Apart from some outliers, they know their roles.

They feel they have more in common with each other than the great unwashed. The political class. It's understandable in some ways. Hermetically sealed.

So much for speaking truth to power, without fear or favour, in the public interest. The audience is not the one who seems to be out of touch.

2. IF WE REPORT SOMETHING ONCE, YOU CAN'T ACCUSE US OF IGNORING A TOPIC

According to the Guardian’s Paul Karp:

I would say the thing that people either don't understand or they do know on some level but frequently ignore is this: not giving a story the prominence or frequency of reporting that they would like it to have is not the same thing as ignoring it, suppressing it, or failing to report it as is often claimed…

People seem to want media to campaign, by writing the same story endlessly until the reader gets whatever outcome they're after. Anything short of that is characterised as a conspiracy of silence.

No, Paul. There’s a big difference between a story being on page 16 once before disappearing forever, and a complete beat-up dominating page one day after day, complete with a 48-point headline, as we so often see in the Australian media.

Putting undue prominence on one issue while virtually ignoring another is referred to in the MEAA guidelines, as well as in most university journalism ethics classes. It serves to mislead the reader. In effect, it is lying by omission. That is the complaint most often levelled at Australia’s media by the public.

Despite Karp’s obvious disdain for his readers, it is not they who misunderstand their function.

“Ashbygate” is a perfect example of this selective form of reporting.

Despite lacking anything remotely approaching the resources of the mainstream media, IA launched an investigation into this plot to overthrow Speaker of the House Peter Slipper. This was almost universally ignored by the mainstream media, who commonly derided us as conspiracy theorists. Nevertheless, our reports garnered such widespread public attention, IA was able to raise enough money through crowdfunding to conduct a proper investigation into this attempted coup.

Eventually, we published an acclaimed book on this vile conspiracy, for which leading barrister Greg Barns provided a memorable quote for the front cover:

‘Ashbygate was monumentally under-reported by mainstream media because it didn’t match the "let’s get Gillard" objective. This book proves how wrong the media was.’

In December 2012, Federal Court Justice Stephen Rares scathingly threw out the workplace sexual harassment suit launched against Slipper by James Ashby, calling it an abuse of process. And despite years of media reports hounding former Speaker of the House Peter Slipper, the absence of news reports on that decision was deafening — even from the ABC.

Six months later, Greg Barns appeared on ABC’s The Drum and brought up this topic. Barns again lauded Independent Australia and condemned the mainstream media’s reporting of the issue, especially the non-reporting of the Rares’ judgment.

Drum host Steve Cannane quickly closed down Barns and moved on to another, safer, subject.

In somewhat heated discussions on social media between Cannane and his audience, the ABC host denied closing down the discussion. He also declared that the reason for the almost total media blackout on the outcome was because the judgment had been handed down in December.

‘… It’s how the media work at Xmas. Many off work. Stories move on. Didn’t think it was that controversial a point,’ said Cannane on Twitter.

As IA replied to him at the time:

‘How unfortunate for Nixon that Watergate didn’t happen over Christmas in Australia.’ 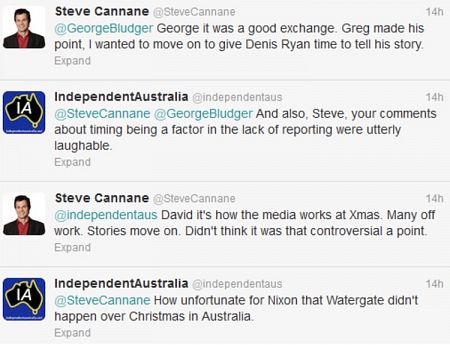 Despite being a relatively regular panellist beforehand, Greg Barns has never been asked to appear on The Drum since.

The lesson for the public there is: never question the mainstream media’s narrative. And definitely do not even intimate there may be credible and creditable alternatives to the "Big Three".

Margaret Simons believes people are ‘completely unaware that news media has been struggling for profitability’ and ‘multiple waves of redundancies and collapses of the business model’  have led to a lack of ‘mission and leadership and culture’.

We would say that this is indicative of a systemic lack of ethics, precisely because of the Big Three’s mission and culture.

Telling the truth is free. As the Ashbygate story attests, when you are in the business of fearless truthtelling, whinging about profitability and resourcing issues seem rather lame excuses. You just have to find a way. IA has been doing it on the smell of an oily rag since we started publishing in 2010.

Former Press Gallery journalist and author Geoff Kitney blamed Australia’s media malaise, not on bias but on the bold new online world and its insatiable demand for “hits”:

… The test of success [for an article] being how many hits it generates on websites. Considered, issues-based, balanced analysis fails this test.

…This is the fundamental issue of a failing media, rather than whether coverage is biased.

This seems rather a tepid excuse, given in days gone by, journalists were instead judged on how many papers their stories sold. Newspaper enterprises folded if their circulation numbers dried up since they couldn’t sell enough advertising.

4. IT'S NOT AN EDIFICE! SOME JOURNOS POSSESS INSIGHT

However, Kitney did make some good points.

For instance, he did not fetishise the so-called “anonymous trolls” in the “Twitter sewer”, so despised by many high-profile hacks:

‘In days gone by, instead of getting abused online, I received turds in the post neatly wrapped in my articles…’

As Kitney suggests, being intimidated – whether anonymously or otherwise – should never be a deterrent to truth-telling.

Journalism is, in fact, one of the most dangerous professions in the world. Twitter provides a much safer forum than being a maverick journalist in Russia and perhaps getting shot. Or telling the truth about American war crimes and being locked away for life, like Julian Assange.

[READ MORE about some other self-aware Australian journalists, such as Misha Kitchell and Amy Remeikis, in the members only FULL VERSION OF THIS ARTICLE.]

Telling the truth is vital, regardless of your preferred personal outcomes.

Unfortunately, as perfectly illustrated by one of our favourite Mark David cartoons, many Australian journalists search vainly for the bin fire on one “side”, when the house is on fire on the other: 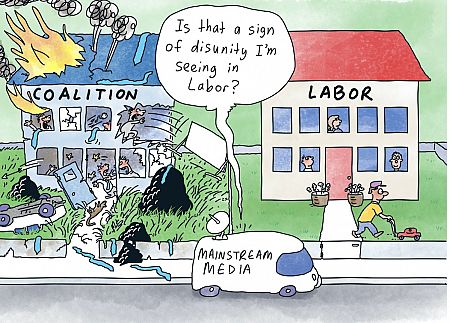 Journalists need to adapt to no longer being the all-knowing gatekeepers and start seeing the public as their equals. Perhaps even, heaven forbid, a valuable resource?

Change is coming, whichever way legacy media choose to see it. They can either adapt or be swept away in the tide.

Because it isn’t the audience that’s stupid. 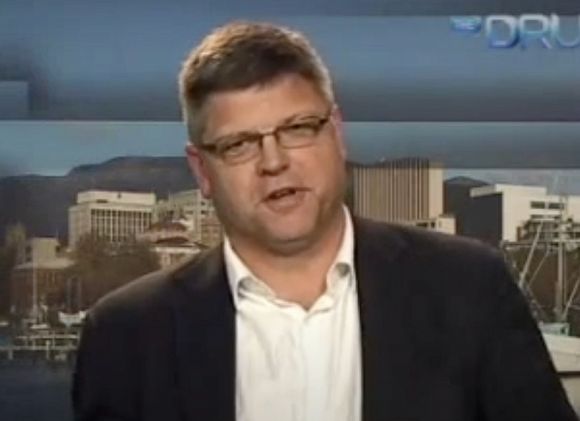 Greg Barns applauds Independent Australia's Ashbygate investigation on ABC's The Drum and in the Hobart Mercury, and condemns the mainstream media's lack of interest. 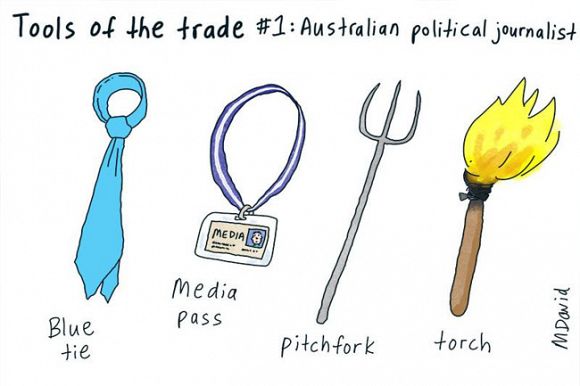