He once again called out the mainstream media for their blatant bias in relation to the matter and seeming lack of curiosity with respect to Justice Rares' damning Federal Court judgement.

News Limited "journalist", Joe Hildebrand, also on the panel, effectively ruled out any suggestion that Peter Slipper (or Craig Thomson, for that matter) was entitled to any presumption of innocence.

These are dark days for the media in this country.

Before this panel convened, The Mercury published a cutting rebuke by Barns of the Australian media's lack of impartiality; the following is an excerpt:

'The media's lack of interest in following up the findings of Justice Rares about Mr Brough and his conservative friends is in stark contrast to the way in which Mr Slipper has been treated.

He had been slurred in all manner of ways by the media and called "King Rat" by the Daily Telegraph.

Yet Mr Slipper was vindicated by Justice Rares.

The appalling lack of interest shown in the story by the Canberra gallery has not infected some outside the so-called mainstream media.

Ms Kingston, along with Independent Australia has pursed Mr Brough and the Ashby story in a way that puts the Canberra Gallery to shame.

Ms Kingston even sent a series of questions for a Sunshine Coast Daily journalist to ask Mr Brough on a train trip he was doing in January this year.

Last week Mr Slipper called for a Royal Commission into the Ashby matter.

He won't get one and one big reason for that is that he is on the wrong side of politics for the Canberra Gallery.

The political media in Australia should report fairly at all times.

It has failed our democracy in its silence over the Ashby case. 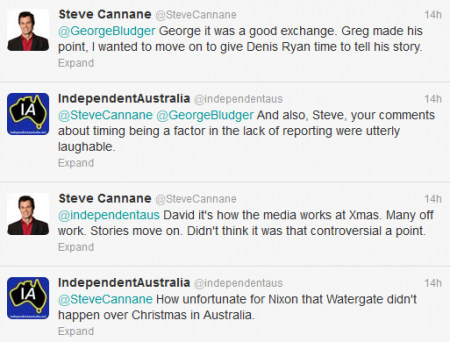