Former MP Denise Allen believes the mainstream media are so hell-bent on regime change, they are not applying proper scrutiny to the policies of Tony Abbott and the Opposition. 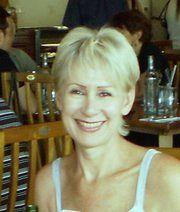 Someone (me) once wrote:


“It is incumbent on professional journalists to write fair and balanced opinion and provide such meticulous, factual information outlining both sides of a story as to allow the reader to make up their own minds accordingly”.

Today’s 24 hour media cycle has completely thrown professional scribing by many mainstream journalists out the window — including those new to the profession and, increasingly, the old school.

Like jackals baying for blood, these neo-hacks ram their personal opinions down the throats of either the unsuspecting (often so aghast they are shell-shocked), or of the insatiable – the scandal hungry – devouring biased information as if it was their last meal.

Many Australians, however, expect much, much, more from the “old school” — many of whom have been respected and admired for years as reliable political journalists.

Alas, it now seems that 99 per cent of the time, the ‘news’ or commentary appears to be the journalist’s own personal opinion — often even according to their own political leanings.

The prime example of this deterioration in standards, is the recent diatribe directed at a sitting Prime Minister and Government? So much so, that the authors almost seem to be willingly complicit in aiding the Opposition in its attempts to bring down an elected Government merely on the strength of  vindictive, acerbic personal opinions and commentary.

Undoubtedly this Government is distracted by the sideshows of Craig Thomson and the Speaker, Peter Slipper. But no one, especially the Opposition and the media, cared about either of these men’s past behavior until the Opposition leader apparently decided it was a pathway for him to seek his revenge for not being made PM in 2010.

An ABC journalist I once held in high regard recently interviewed the Prime Minister. Now I always enjoy a good hard-hitting interview, but this was more like schoolyard bullying; more like the now familiar modus operandi of a commercial shock jock than a highly professional ABC journalist. Regardless of your opinion of the PM, her role demands far more respect than that which has been afforded her.

I cannot remember a time when the mainstream media have been more in the gutter and more hateful than it is now — and they have the hide to disparage politicians for not being ‘honourable”.

Why don’t these mainstream “professional” journalists return to the ground breaking investigative journalism of past editions?

Why don’t the mainstream media follow up articles akin to the likes of Peter Wicks from IA and his in-depth articles on other players in the Thomson issue?

My answer, of course, is ‘I don’t know’. I can only assume they are either miffed at not “scooping” the story; or perhaps, more revealingly, they know that their media proprietors, editors, and powerful interests simply don’t want the public to embrace alternative agendas.

My father always taught me that if you weren’t there and didn’t see with your own eyes you are not in a position to judge. A very wise man, my Dad.

It is increasingly obvious, for example, that in order for Abbott to get his ‘revenge’, and the Opposition into Government – as these journalists so widely predict and so obviously want – that we are not allowed to read about what we should, might or will get?

Where is the in-depth analysis of the Opposition statements, tactics and policies; of the reasons why they will do whatever it is they want to do? Don’t we have a right to know about their agenda, so we can make up our own minds about Abbott and his cohort.

Instead we have the unedifying spectacle of a media deliberately depriving the people of that knowledge. By so doing, they knowingly lead the masses into ignorance. They usher them – mindless but willing, to elect an Abbott led Government hell bent on the gladiatorial destruction of the vulnerable, and the processes and standards of our Parliament. 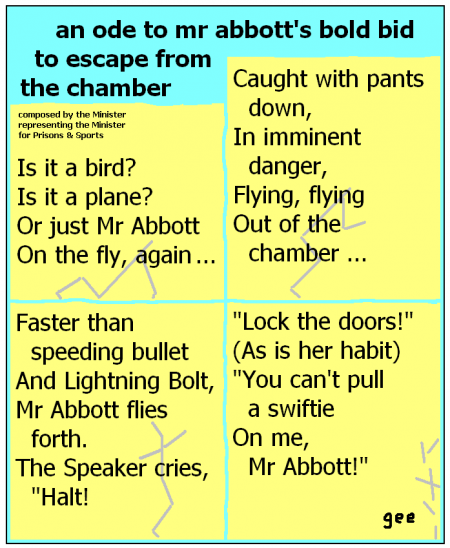 A handful of media organisations, through their editors, journalists and commentators, have given Abbott a free ride. So they write about politicians not being honourable, or believable, and constantly accuse and denigrate them for ‘spinning’, when much of what is published is exactly that, whether presented in major newspapers, TV, twitter, or blogs.

They twist and edit a politician’s words — and deny us fair, balanced and factual information from both sides. They take to these forums with their own interpretations of an issue or statement as if it was gospel! As if they were God!

With their sarcastic – supposedly humorous – witty commentary, they take to the airways as if they themselves are so much better than everyone else.

What would happen if we turned the tables and started hounding them day in day out about their private and/or professional lives. I bet there would be litigation faster than you could say “Clive Palmer”!

What if the public demanded that media proprietors, and their associated vested interests, not just promise, but ensure, that editors, journalists and commentators are able to conduct themselves in a professional manner — without fear or favour.


A NOTE FROM THE EDITOR

This piece is the strong personal view of Denise Allen, a former MP, and may be seen as offensive by some in the mainstream media. It is, however, becoming an increasingly common view in society, as standards of public trust in the popular press plumbs new depths.

Independent Australia would like to make plain that we are not anti-journalist — mainstream of otherwise. In an increasingly confusing media landscape, we know that journalists are under siege in this country, and elsewhere, with job losses and outsourcing occurring on an ever increasing scale — and with individual journalists expected to be more productive with less resources – and thus more overworked – than ever before.

If you have a perspective on this issue – perhaps one radically different from the one expressed by Denise – then we would like to hear it and share it with IA readers. Without journalism, our democracy suffers, so let’s all stand in solidarity to support and keep this noble occupation strong and vibrant.