Australia, China and the geopolitics of internet connectivity

How can Australia, sitting at a lamentable 56 on the global broadband speed scale, possibly be trusted to deliver internet connectivity elsewhere? Dr Binoy Kampmark explains the geopolitics.

IT REMAINS the most risible of realities: a self-proclaimed middle power, struggling in the lower echelons of internet connectivity and speed, desperate to use that same connectivity to push out a rival power.

With Australia slumming in the Speedtest Global Index, which provides monthly rankings of mobile and fixed broadband speeds across the globe, a ranking of 56 on the ladder should be a cause of outrage. 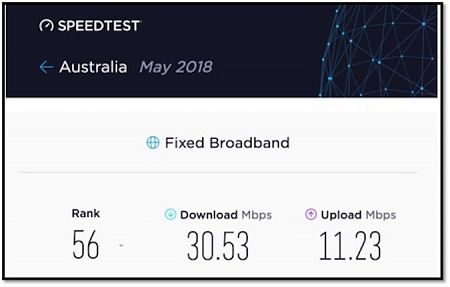 The politics of internet connectivity and data cables has become a rumbling matter in the Asia-Pacific. The Solomon Islands recently became the site for some aggressive negotiations on the part of the Turnbull Government to turn away Chinese interests, notably stemming from the technology giant Huawei. The company had offered a good stake in funding an undersea cable that would have promised high-speed internet connectivity for the Solomons.

It was not to be. Huawei has become a high ranking concern amongst various Western intelligence agencies keen on seeing it as a poorly disguised Trojan Horse.

“ ... the risks of allowing any company or entity that is beholden to foreign governments that don’t share our values to gain positions of power inside our telecommunications networks.”

Once within the system, such an entity could “maliciously modify or steal information” and provide “the capacity to conduct undetected espionage,” he said.

With such groundwork laid, the Turnbull Government was bound to offer heaven and earth to Honiara. At the very least, they would supply a good share of funding for the 4,000 km undersea cable.

Penny Williams, Canberra’s Deputy Secretary of the Department of Foreign Affairs and Trade, told her counterparts that a study had been commissioned on the cost and feasibility of the undersea cable project and it duly

“ ... found a number of solutions that would provide Solomon Islands with a high speed internet connection from Australia at a competitive price.”

Pablo Kang, the Australian Assistant Secretary of the Undersea Cable Task Force, reiterated the line taken by Williams; the project, appropriately managed by Australian officials, would be cheaper than the Huawei alternative. Honiara was thrilled, having become the tight filling in a geopolitical sandwich.

Pacific states are finding regional opportunities to exploit, knowing that they are attractive options for rival powers. Beijing has been finding form in encouraging infrastructure projects while floating the prospect of naval and military options; Canberra, long asleep to this, has woken up to the emergence of Chinese influence.

Now, Vanuatu smells a chance to get into the funding queue, pulling at the purse strings of the Australian taxpayer regarding its internet policy. The desperation in laying a second submarine fibre optic cable had been mounting, with concerns expressed in 2017 that the first submarine capable, laid in 2014, might fail.

Observed a philosophical Simon Fletcher of the Vanuatu-based Interchange Group,

“It is still working perfectly, but on the law of averages at some stage there will be a breakdown and it would take about four weeks to repair.”

Prior to the weekend visit to Canberra by Vanuatu’s Charlot Salwai, Infrastructure Minister Jotham Napat confirmed that the issue of Australian funding would be raised:

“The support that the Australian Government is providing to the Solomon Government — they have to do the same for Vanuatu.”

The Solomon Islands intrusion by the Turnbull Government has other consequences in the politics of internet connections. Given Prime Minister Malcolm Turnbull’s obsession with market competition, the issue of throwing public monies at the Solomon venture is a "rum" one indeed. Consequences are being felt and other states are taking notice.

The Interchange Group, the primary body behind rolling out Vanuatu’s internet cables, was more than a touch concerned by Australia’s muscling in on the Solomons scene. It was “very hard to compete with a free cable”, as chief executive Simon Fletcher explained.  Business, in short, was being soured.

When pressed on whether the Vanuatu case could be made stronger in flirting with a Chinese company, Napat was coy:

Veterans in this regional game will realise that nothing is outside political scrounging, least of all touting for infrastructure funding. Napat will be well aware that ears in Canberra were pricked by reports in April, that China had been negotiating with Vanuatu over establishing a military outpost.

Such a base, wrote a worried Rory Medcalf of ANU National Security College,

“ ... would give China a foothold for operations to coerce Australia, outflank the U.S. and its base on U.S. territory at Guam, and collect intelligence in a regional security crisis.”

For decades, Australia has played the gauche regional bully, indifferent and condescending to its Pacific neighbours while playing bouncer roles for big and powerful “friends”. Periodic interventions have been instigated to ward off threats when they were deemed credible, be it from Kaiser Germany or Imperial Japan. The natives, in turn, had to know their place.

Since the Second World War, Canberra, ever the loyal if creepily enthusiastic deputy, has nursed a mania that U.S. hegemony in the Pacific might be challenged. 'An unfriendly maritime power in the area,' went the Hawke Government’s 'Defence White Paper' in 1987, 'could inhibit our freedom of movement through these approaches and could place in doubt the security of Australia’s supply of military equipment and other strategic material from the United States.'

In recent years, China has taken the mantle of subtle disrupter and wooer, but that hardly concludes the matter. The small island states of the Pacific have woken up to the prospects that their lack of prominence is finally being redressed. Playing off Beijing and Canberra is becoming something of a sport — and the wilier politicians have wisened up to that fact.

The exercise over internet connectivity does come with one potentially crippling caveat: how can an Australian government so lamentable in unfolding its own broadband network possibly be trusted to get that job done?

The likes of Huawei may, in time, have the last, enduring guffaw.

The Turnbull Government went above and beyond to stop Huawei from building an undersea internet cable in the Pacific only to award the contract to Vocus, a Liberal Party donor. Transparency and integrity clearly a priority for this government. #auspol https://t.co/DGkbWsRTmw

Dr Binoy Kampmark was a Commonwealth Scholar at Selwyn College, Cambridge. He lectures at RMIT University, Melbourne. You can follow Binoy on Twitter @bkampmark and email him at bkampmark@gmail.com.