In 1933, a police constable was speared by an Indigenous man in the Northern Territory. In 2003, the families of both men came together, writes Joan McColl.

In 1933, my husband’s uncle, Constable Albert McColl, was speared by a First Nations man whilst on duty on an island off Arnhem Land. Albert had gone to Arnhem Land with a police party to arrest some Indigenous people who were believed to have murdered the crew of a Japanese pearling lugger.

His death led to Dhudi Djapu clan leader Dhakiyarr Wirrpanda taking responsibility and being tried and convicted by the Northern Territory Supreme Court. Dhakiyarr was later exonerated after a High Court appeal.

After Dhakiyarr's release from prison, on his way home, he apparently met with foul play – or at least disappeared – leaving his community without their revered leader.

We knew Uncle Albert’s story, but since 1933 there had been no contact between McColls and Yolngu people.

Out of the blue, 70 years later – in 2003 – our family received an invitation from Northern Territory Solicitor-General Tom Pauling QC, on behalf the family of Dhakiyarr Wirrpanda, to attend a Wukidi ceremony.

Albert’s only surviving sibling, his sister Evelyn, gave her blessing for McColls to accept the surprise invitation to attend the Wukidi ceremony. And so, 33 McColls bravely accepted the invitation.

We watched in awe as proceedings began. Over 100 Yolngu men, women and children danced and chanted to clapsticks and yidakis, in a ceremony designed to return their lost ancestor’s spirit to his ancestral land, and cleanse those involved in his death. 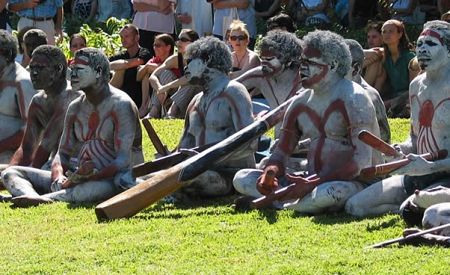 The proceedings continued with the large Yolngu contingent adding the regalia of feathered armlets and head pieces, then moving inside the Supreme Court, followed by over 1,000 onlookers, including members of the judiciary. We were swept along by Yolngu women and shown the place designated for us inside the Supreme Court building.

The ceremony was presided over by High Court Chief Justice Murray Gleeson, along with Northern Territory Supreme Court justices, Northern Territory Chief Minister Clare Martin and the same Solicitor-General Pauling. They had also all added their judicial regalia.

The dancers moved into the courthouse, chanting ferociously: "What have you done with our leader Dhakiyarr?” as they confronted assembled Judges and removed the covers from nine meticulously painted beautiful larrikitj poles that remain as a permanent memorial to the dead Indigenous leader.

Chanting grew louder and fiercer as the contingent moved around the ceremonial area seeking the McColls. After the group confronted us with spears raised, the leaders of the Dhudi Djapu clan – Wuyal Wirrpanda, who had a dilly bag containing his clan’s law in his mouth, and his sister Mulkun, who held a gut gut in her mouth –gradually circled towards us. 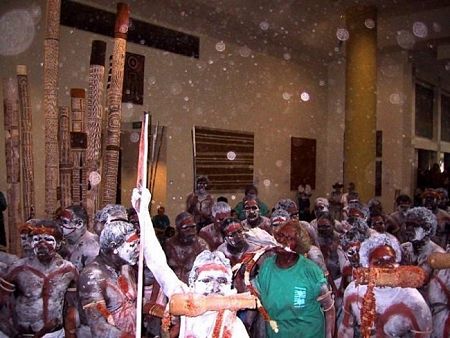 Wuyal suddenly broke the spear in front of my husband Alan, Albert’s closest living male relative, demonstrating that “the war” between McColls and Wirrpandas was over. People assembled stood in awed silence.

Alan was presented with the gut gut by Mulkun. This gift of a gut gut holds deep meaning and the presentation unites McColls and Wirrpandas as “family”.

The McColls presented gifts denoting good will and forgiveness.

Wuyal Wirrpanda, as Dhakiyarr’s oldest and closest living male relative gave a profoundly moving speech, where he apologised to the McColl family for past wrongs  and asked for

“... a little bit of reconciliation, so we can walk hand in hand."

Emotional applause erupted. Wuyal thanked the High Court for sensibly deciding that the decision of the Supreme Court had not been fair or just, thus averting a punitive expedition in 1933. 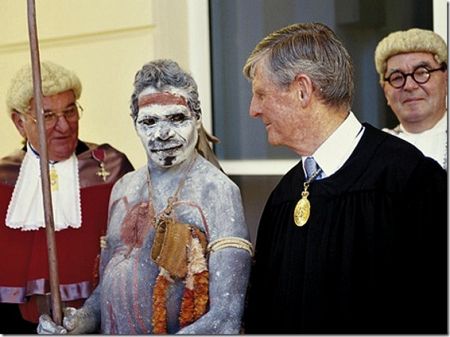 Wuyal Wirrpanda is pictured above with his clan’s “law” under his arm, beside High Court Justice Murray Gleeson

Our first trip to Dhudi Djapu clan homeland Dhuruputjpi took place shortly after the Wukidi. Dhuruputjpi’s remoteness and the vastness of the land the community cares for was immediately obvious to us. Numbers are small and fluctuate according to the season and where the current ceremony is occurring.

Dhuruputjpi has suffered many disruptions over the years, explaining why it is such a small, but extremely strong community.

Dhakiyarr’s disappearance in 1933 as leader was a major disruption to the community’s existence. Skirmishes and "wars" between Yolngu and whites over the early 1900’s included the 1911 Gan Gan massacre, where just a few survived by hiding in a billabong.

In 1935, the Methodist Overseas Mission brought clans together that had no history of co-operation. Yolngu people spoke highly of their literacy education, but this was at the expense of language and culture.

In 1963, Yirrkala bark petitions protested the granting of mining rights to Nabalco of part of Arnhem Aboriginal Land Reserve. The Nabalco Agreement revoked part of the reserve to enable Nabalco to develop the mine. When clans challenged this in 1971, Justice Richard Blackburn held that leases were valid, rejecting native title.

The subsequent development of Nhulunbuy introduced hotels, alcohol, commerce and ideas foreign to the area.

Leaders gave people an injunction to return to homelands. They felt vulnerable and concerned, and many still do. Their vision to develop sustainable, self-sufficient homelands for families and future generations is still strong and relevant today.

The abolition of the Community Development Employment Projects (CDEP) scheme in 2009 gutted the Dhuruputjpi community, added to health problems and slowed what had begun to flourish.

Disruptions continue to this day.

The Joint Select Committee on Constitutional Recognition of Aboriginal and Torres Strait Islander Peoples released its final report on 25 June 2015. It recommended options for the recognition of Australia's Indigenous population in the Constitution. Dhuruputjpi residents have little knowledge of this and what implications it may have for them. Similarly, there has been widespread discussion in the mainstream media regarding the closure of some communities. Indeed, the prime minister recently dubbed it a “lifestyle choice” to live in remote communities.

Over the time we McColls have known this community, we have seen funding for it squeezed out.

The Community Solidarity Action NT Group held a forum called 'Developing the North: At What Cost?' In Singapore, Tony Abbott shortly after signed a free trade agreement and hosted a Northern Australia Roundtable, about the “opportunities on offer in the north” for investors with “trillions of dollars”.

Meanwhile, the Pope in Bolivia was decrying

“... the mentality of profit at any price, with no concern for social exclusion or the destruction of nature."

When we were at Dhuruputjpi a few years ago, a business man from Nhulunbuy jumped from his car on arrival and, following brief introductions, forgot further niceties. Instead, he kicked at the ground, bent down, picked up some dirt, ran it through his fingers and asked community leaders he had just met if they knew that it was bauxite and valuable.

'The north has untapped promise, abundant resources and talented people.'

The 'untapped promise, abundant resources' appear akin to the terra nullius doctrine and raises the question of who the talented people are. The businessman’s attitude to community members did not seem to accord them any idea of talent. Yolngu people we have met have many talents. The promise and resources of their land have been tapped for millennia. We could learn much from them if we opened our minds and hearts to them, and their knowledge and understanding of the world. Much has been lost since British colonisation, such as hundreds of Indigenous languages. Only about 20 remain that are not highly endangered.

In conversation with Dhukal to celebrate the twelfth anniversary of the Wukidi, we realised we would like the significance of the Wukidi ceremony to be widely known and understood. Important implications remain for relations between indigenous and non-indigenous people today, such as learning how mistakes can be rectified and how amazing Yolngu culture, law and language is.

The story behind the Wukidi and the larrikitj poles reaches back in time. It still has important implications for relations between Yolngu and Australian law.

'It was the first meeting of these two laws, and they couldn’t recognize each other.'

IA contributor Natalie Cromb wrote recently she wished that with

'... respect will naturally come the knowledge that Aboriginal people can and should self-determine, they should be in control of their cultural lands and they can and will teach connection to land, conservation and energy to a population that deserves this knowledge.'

The word "opportunity” appears many times in the Northern Australia White Paper.

Of course, it is a land of opportunity and, to the non-Indigenous eye, the golden opportunities and promise could easily be lost in a chase for something that glitters. We know that would not always be golden and the real gold that lies within these beautiful communities, which should be cherished or, sadly, it could become the treasure that is lost forever.

A fair go for the First Nations: Australia needs a #Treaty, by @NatalieCromb. #Indigenous http://t.co/49bTP16I2a

22 July 2015, 9:00pm In 1933, a police constable was speared by an Indigenous man in the Northern ...
Join the conversation
comments powered by Disqus
News updates