The hardliners in the Immigration Department are in control and family separation is the tool of choice. Senior correspondent Barry Everingham reports.

SOME OF THE MOST horrific pictures to emerge from the Nazi era of the Holocaust were the images of mothers being separated from their children before they were sent to Hitler's gas ovens. The civilized world hoped such sick cruelty would never be seen again.

But what the world didn't reckon on was the emergence of the likes of Tony Abbott and Scott Morrison in the 21st Century, two professed Christians whose obsession with stopping boatloads of humans trying to find a better life than the one they were escaping from in what they thought was a humane nation.

Abbott and Morrison  are condoning unbelievable cruelty to asylum seekers — labelled "illegal entrants" by this pair.

Sources in the know tell of what is really going on in the Government run detention centres Christmas Island, Nauru and Manus Island.

Forced family separations and threats of separation mingled with coercion and intimidation and being detained in appalling living conditions are just some of the horrors being heaped upon the asylum seekers.

Scott Morrison won't tell the truth of what is happening,  citing specious "security reasons" for his silence. He's fooling nobody.

Those close to what is actually happening  are leaking like sieves.

According to one source, the Abbott/Morrison  solution is striking fear among asylum seekers from the time they get on the leaking boats in Indonesia until they get dumped in hot, unsanitary, cramped tent camps on Nauru and Manus Island.

Last month, immigration officers forced two unaccompanied  two Sri Lankan children, one 12 the other 14, onto a plane to return home. Their travelling companions were to be some of those who they arrived with on Cocos Island after 34 days at sea.

From the Sydney Morning Herald:

''The children were crying and screaming and begging to be able to stay,'' said a witness. ''One of the security officers realised they were too young and no one was accompanying them and so took them off the plane. Then there was a stand-off while someone rang Canberra and were instructed by someone very, very senior to put them back on the plane.''

No prizes for guessing who delivered that instruction.

''The leash is off,'' said Pamela Curr from the Asylum Seekers Resource Centre. ''The hardliners in the Immigration Department can do what they like. And family separation is the tool of choice.

They can say what they like, it's happening. Under the old government it occurred but it was usually incompetence. Now it is deliberate. They are separating families on the wharf at Christmas Island.'' 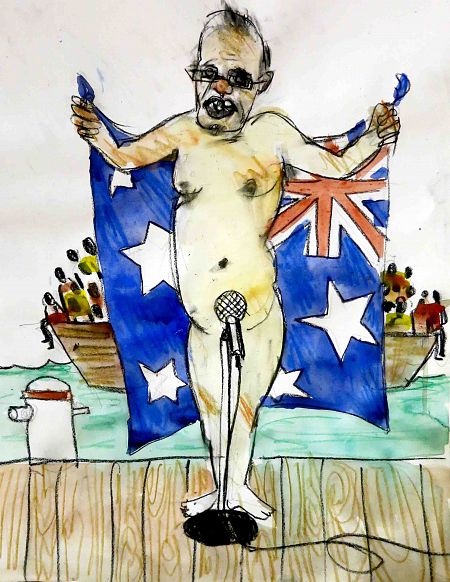