The Crown: a living symbol of religious bigotry

"In a few weeks’ time, the walking, living, breathing symbol of White Anglo-Saxon Protestant sectarianism will be greeted when she arrives in Australia amidst much grovelling, curtseying and fawning," says Roy McKeen. 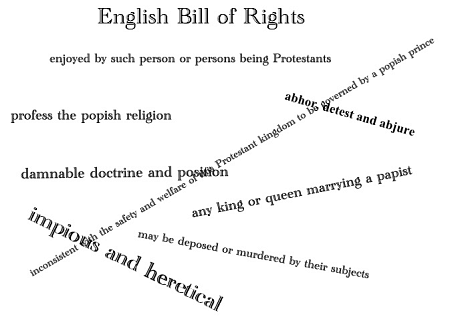 “I fear sectarianism or intolerance is creeping back into our politics and our media.”

“…that care should be taken to keep sectarianism at bay and to be prepared to object to anti-Catholicism along with any other bigotry.”

In a few weeks’ time, the walking, living, breathing symbol of White Anglo-Saxon Protestant sectarianism will be greeted when she arrives in Australia amidst much grovelling, curtseying and fawning.

Making one of her rare, and perhaps last, visits the head of state of Australia will be feted, but there will be few, if any, reminders that the British (and hence Australian) monarchy is soaked in anti-Catholic bigotry, which is deeply enshrined in its laws. The laws of succession to the throne don’t pull any punches. They make it very clear that a Catholic monarch is not welcome.

The Bill of Rights 1688 describes Catholicism as “impious, heretical” and “this damnable doctrine” and goes on to say that “it is inconsistent with the safety and welfare of this protestant kingdom to be governed by a papist.” In other words Catholics are not to be trusted.

Amongst those leading the fawning and grovelling will be Tony Abbott, who, after Cardinal George Pell, is the most in-your-face Catholic in Australia. Yet Abbott is an avowed monarchist, having served as Executive Director of Australians for Constitutional Monarchy from 1993 to 1994.

One can only wonder how a Catholic of such prominence can be a strong supporter of an institution which treats people like him as inferior. There would not have been too many Jews in the Nazi Party in 1933, nor Afro-Americans in the Ku Klux Klan!

Maybe Susan Mitchell has a point.